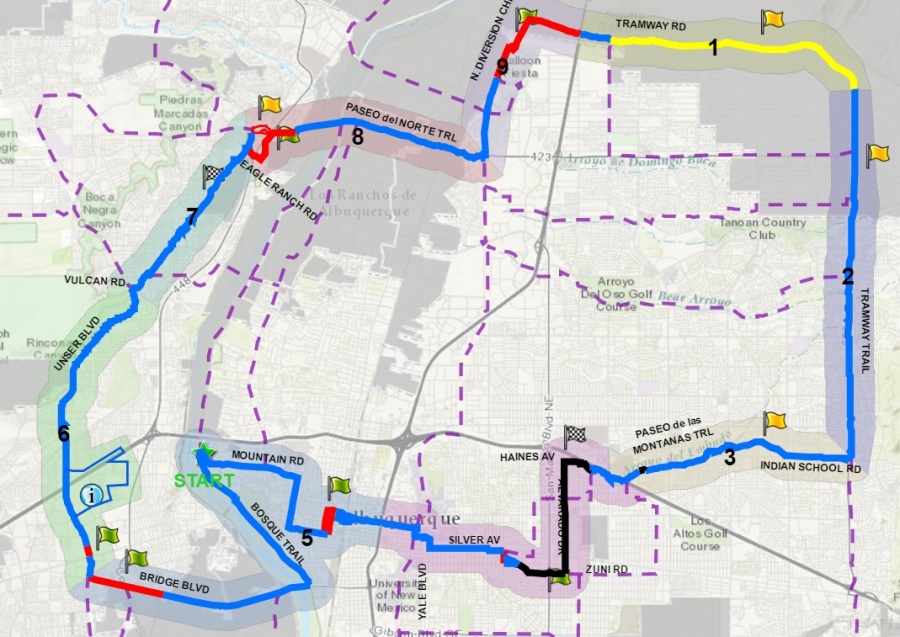 You might not have heard that Mayor Berry will lead an “Unveiling of the 50-Mile Activity Loop Wayfinding Signs” this morning at 10:30 somewhere near the bike/ped overpass of I-40 at the remains of Winrock Mall.

Promotion and marketing are not City of Albuquerque strengths, particularly when it comes to non-motorized transportation improvements, and maybe that’s a big reason why the 50-Mile Loop hasn’t captured the public’s imagination much since it was announced by Mayor Berry as part of “ABQ the Plan,”  the amorphous and ill-named set of projects that might better be termed “Stuff Built While Berry Was Mayor Here.” The only info about the event I could find was via BikeABQ.

Unlike many other project under the wobbly “ABQ the Plan” tent, the 50-Mile Activity Loop also hasn’t featured much construction since first announced years ago. About all that has been accomplished, as seen above in the City’s map, is some work on Zuni Blvd. and Alvarado Drive (the portion in black above).

And the improvements on Zuni and Alvarado are nice, particularly the dramatic change on Zuni, but that work has more to do, and more importance, for local cycling along Zuni than any conception of someone “Doing the Loop,” so to speak.

And speaking of phrases like “Doing the Loop,” I get around a bit in the cycling community (admittedly far less than many others) and I’ve never heard any phrase or comment about the 50-Mile Activity Loop. Ever. It’s been brought up a few times at meetings of the City’s bike committee, but I know of no rides organized around “Doing the Loop,” or riders who mention any of the loop segments, even the small Zuni/Alvarado portion, as being part of “the Loop.”

Cyclists do ride sections such as Tramway Blvd. up to County Line BBQ, but they are riding “Tramway” instead of “the Loop.” In other places, such as Bridge Blvd., they are not riding much either the blue portion above with a bike lane, or the red “unfinished” portion that will supposedly help complete the Loop. The red sections above, particularly Eagle Ranch/Unser/Coors, are notoriously dangerous and will take fairly massive construction/cash to make them satisfactorily safer.

All to make the Loop “really” a Loop.

Given that Mayor Berry is leaving office soon, will we ever “get the red out” of the so-called 50-Mile Activity Loop? Should we even try? My colleague on the City’s Bicycle Committee Moisés González summed up what’s wrong with the idea of a “50-Mile Activity Loop,” from the cyclist’s perspective, back in a 2014 op/ed in the Journal:

If you want to spend this kind of money on bicycle infrastructure, fix the dangerous, substandard facilities now touted on the city bike map, connect the dots where facility gaps make getting somewhere dangerous or impossible and then publish a pamphlet of the dozens of “loops” created.

So this morning there’s a little ceremony, an “unveiling,” around wayfinding signs being put up along the so-called Loop. What kind of odds will you give me on my bet that these signs will not cover the entire 50 miles with any density that would make them truly useful as a wayfinding tool?

I’ll take any odds you give me. I’d love to take your money on this proposition, even if it’s pennies on the gambling dollar. It’s a “sure thing.”

Still, there is this little ceremony this morning, one of what will likely be several “ABQ the Plan”-related shindigs marking the somewhat Ozymandiazian inclination for Mayor Berry to “build stuff.”

Even when not much gets built.

One guesses the “50-Mile Activity Loop” from a signage perspective will become “two vast and trunkless legs of stone standing in the desert,” to quote Shelley, with signs anachronistically similar to that I spotted along Broadway the other day: 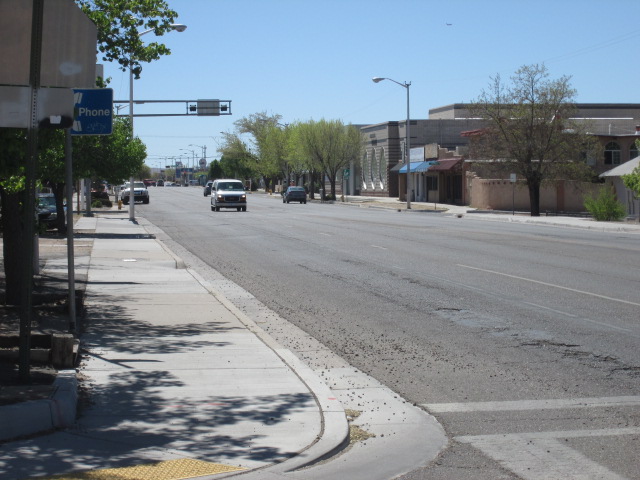 See the sign in blue, top left? Yeah, that’s probably one of these “50-Mile Activity Loop” wayfinding signs in about five years. If that long.

One thought on “Look Upon Me Works, Ye Cyclists, and Despair: The Mayor’s “50-Mile Activity Loop””