As we continue our look at how to best connect the Silver Bike Boulevard in its shiny, new iteration from Carlisle to Yale with downtown and on to the Rio Grande, let’s shift away from the audacity of Solution #1: tunneling, boring and bridging our way through I-25 and the Alvarado Transportation Center, and tackle the more mundane idea of merely improving the existing bike infrastructure on Lead and Coal.

I admit from the outset Solution #2 doesn’t seem nearly as exciting as Solution #1’s hugely cathartic monkeywrenching of an interstate highway and essential “F.U.” to the facepalm-worthy bad design of the Alvarado and environs.

Compared to all that, here’s an example of what we could do with Lead/Coal to make it much safer: Make the intersection of Coal and I-25 frontage road (Locust)…

look like the “after” photo of MLK and Locust on the right:

Flexposts and green paint here and there, and we’ve made Lead/Coal safer and saved approximately $300 million dollars compared with monkeywrenching I-25 and Alvarado.

Boring. (and not the tunneling kind of boring)

Here’s why: small, inexpensive changes to Lead/ Coal between, let’s say, Mulberry, just west of I-25, through downtown will accomplish next to nothing in terms of building ridership and engendering a sense that Silver Bike Boulevard really does run from Yale to the Rio Grande.

Because we have to ask ourselves, especially those of us who already ride Lead/Coal, and who have whooped and hollered about the widened bike lanes, buffers and such in the fairly recent improvements there: Who is riding up and down Lead/Coal now?

Well, honestly, we don’t know. We need some bike counts. That’s a long story for another time, and yes that story will involve you, at some point, in a lawn chair at the intersection of Coal and Locust.

So instead, we have to rely on anecdotal memory and our inevitable biases, so here are mine: I see some riders on Lead/Coal, and they tend to be

Here’s who I don’t see riding up Coal and down Lead, even with the recent improvements:

Not to generalize, but I see similar helmet-less folks riding and very definitely skateboarding Silver now between Carlisle and Yale, but I don’t see them going to/from downtown on a bicycle or skateboard.

The photo above illustrates the Maisonneuve Boulevard cycle track in Montreal. I had the chance to ride this daily for a month a few summers back, and it was the most fun, and just about the most safe, urban riding I’ve done in years of riding/touring Seattle, NYC, D.C., Philly, Berlin, Amsterdam, Strasbourg, etc.

Solution #2 uses Maisonneuve as its precedent, and isn’t just flexposts and green paint. And it doesn’t involve Coal at all.

Instead, let’s put curb separation, everywhere we can, between the right driving lane and what is now the bike lane and buffer all the way from Mulberry to 2nd Street (we’ll discuss Lead from 2nd to 8th in the next post). Here’s the stretch:

And eyeballing Lead a bit more closely, here at Walter, we look to have about 29 feet to work with: 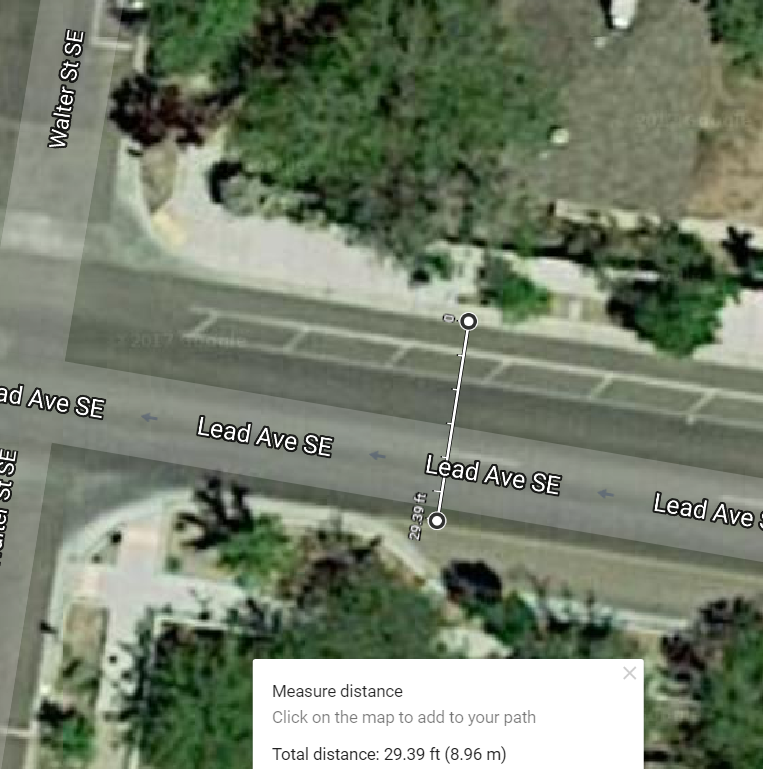 Putting a two-foot curb between what is now the bike lane buffer and right driving lane, we could squeeze the following:

Yeah, ideally we’d lose one of the driving lanes and really have room to stretch out the cycle track, but this works and better fits the 11,500 Average Weekday Traffic (AWDT) on Lead.

Solution #2 chooses Lead, and largely leaves Coal untouched (yeah, we still gotta, gotta, gotta have those flexposts and green paint at Locust), because it creates the chance to address another long-time danger zone: Broadway through downtown. 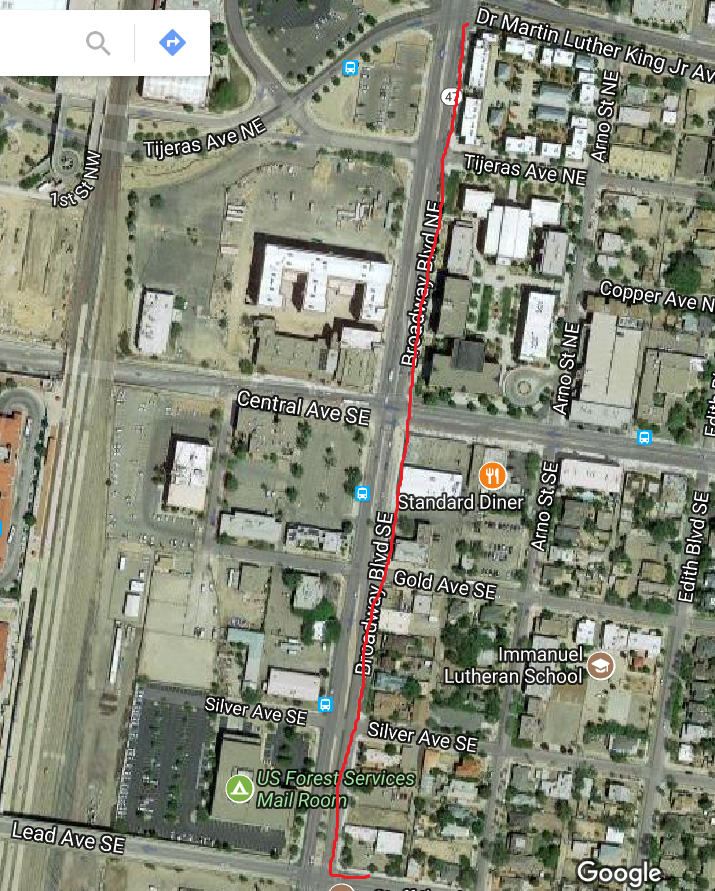 Apologies for the red line careening like a drunken sailor, but you see what we’re talking about here? Let’s connect the newfound wonderfulness of MLK improvements with the beyond wonderful cycle track on Lead to create a no-left-turn corridor down and back up the hill from downtown to I-25.

And yes, MLK could be improved even more with a cycle track of its own on the eastbound/southside.

In sum, our drunken sailor careening leads to this:

Are there obstacles involved in Solution #2? You betcha.

Costs, a high number of ingress/egress points in spots, political will, costs and more costs are only the most important in a litany of reasons audacious Solution #2 cannot be attempted. (obscure obstacle you might not think about: Broadway [NM-47] is a NMDOT facility through downtown, not CABQ, or it’s not, or it is, or it’s not….it’s confusing)

Still, when one ponders things like blasting bike/ped tunnels/bridges through I-25, plopping a curb-separated cycle track for a few miles near downtown ABQ appears both cheap and sane.

And it is both, particularly sane. What would be insane is putting some purple “bike boulevard” streets signs and some silly 27 mph speed limit signs, along with a few flexposts and green paint, on Lead/Coal and calling the stretch part of a “Silver Bike Boulevard.”

Why do I get the feeling we’re going to, again, be insane?

Stop the insanity of “small changes.” Implement Solution #2 and fundamentally alter how the majority, not just the lycra/helmet mirror/daredevils, of ABQ citizens can rationally get to/from downtown in a human-powered manner.