Caution: Crash report transcript excerpt below is graphic in detail.

We tend to prefer our news somewhat like the meat we buy at the grocery.  With some exceptions, e.g., gruesome injuries suffered at sporting events, we love vivid details only if cleanly packaged similarly to the pork roast we see at Smith’s or Albertson’s. Neither news nor grocery displays the dead as can be seen in markets in other parts of the world.

There are many reasons and outcomes from such a cultural policy, all arguably good or bad. For example, would more Americans be vegetarians if freshly butchered pigs, heads intact, were hanging at the Albertson’s deli? Would that (with “that” including vegetarianism) be a good or bad thing?

In terms of news coverage, the American informal/formal limit in verbally or visually showing the result of crime and other incidents leads to images/graphics like this when reporting crashes involving people walking our roadways: 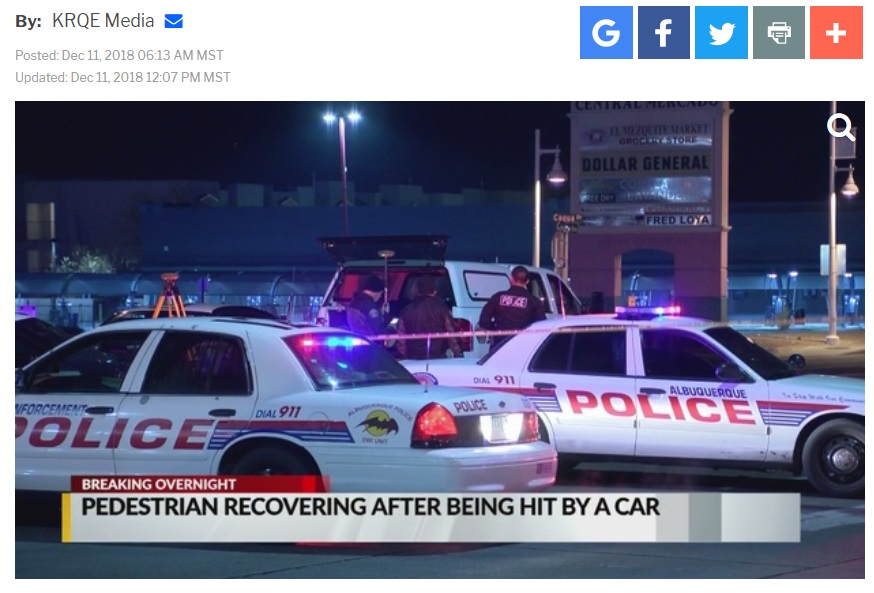 Again, the reasons for this established practice are many, and assigning “blame” for what is arguably an overly store-bought meat approach to presenting information is not the point here. It is just the reality. And that reality leads to many things, including a somewhat to overwhelming lack of humanity in reporting of incidents involving those killed and injured walking our roadways. This reality is summed up in frequently used human-free headlines for such incidents, along the lines of “Pedestrian dies after being hit by vehicle.”

Centered on the assertion that providing more human information about crashes involving walkers, including reference to these people as “walkers” instead of “pedestrians,” will lead to better understanding and action on making our roadways safer for all users (drivers very much included) Better Burque will pass along excerpts from crash reports and investigations found via public records requests to Albuquerque Police and Bernalillo County Sheriff offices.

Yes, these excerpts will include graphic and gruesome details. The focus will also include far more from drivers involved than walkers, not only due to the simple fact police cannot interview deceased walkers, but that the psychologically traumatic results for drivers involved is a hugely important aspect of these stories that, somewhat inexplicably, is almost never brought up.

To use the commonly-held, although mistaken, perspective that drivers are “us” and deceased walkers “them” (in terms of alcohol/drug impairment, not using the crosswalk, wearing dark-clothing, heck, walking along/through our streets) it is an uncomfortable but very essential fact that there are multiple victims in most such deaths, including drivers. Including “us,” so to speak.

And now, finally, today’s excerpt taken from a police investigation narrative from an  incident earlier this year:

“(Driver) drove home to her residence…and had some misgivings about having struck the item in the roadway. Driver felt compelled to return to the scene and make sure it was not a pedestrian. Driver added with a shaky voice, holding back tears, that s/he heard the bones snapping and breaking. When s/he returned to the scene and saw the emergency vehicles and lights, s/he knew that it was a pedestrian that s/he had struck.”

Better Burque will have more to relate about this and other incidents in coming days/weeks, including more excerpts. We’ll try to remember to put cautions atop posts with such excerpts.

Stay safe out there, everybody.