Peeling back layers to better understand why today’s youngsters don’t walk or ride bikes to/from school consists of much layer peeling. The layers/factors are many and their seeming permanence often hardened to the point where change might be impossible.

In a perfect world, most conducive to neighborhood schools to/from which kids cross no major streets on their way walking and/or biking, attendance boundaries would not look like this one for Acoma ES:

One layer of interesting peeling would be to know more of the history behind APS boundary development and school location planning. A look at several current elementary school boundaries shows some, but (as shown above) perhaps not enough emphasis given at the time on avoidance of crossing busy streets/highways.

Correcting this in the future, if encouraging safe walking/riding is truly to be a goal, will involve wading deeply in the other socio-political forces at play in boundary development, or dramatic redesign of our roadway system with such safety in mind. The example of Acoma ES above is extreme. Who’s gonna have their kid walk from east of Tramway to west of Juan Tabo? How much time would it take the kid to get to school?

Other cases aren’t so extreme, but still could use improvement: 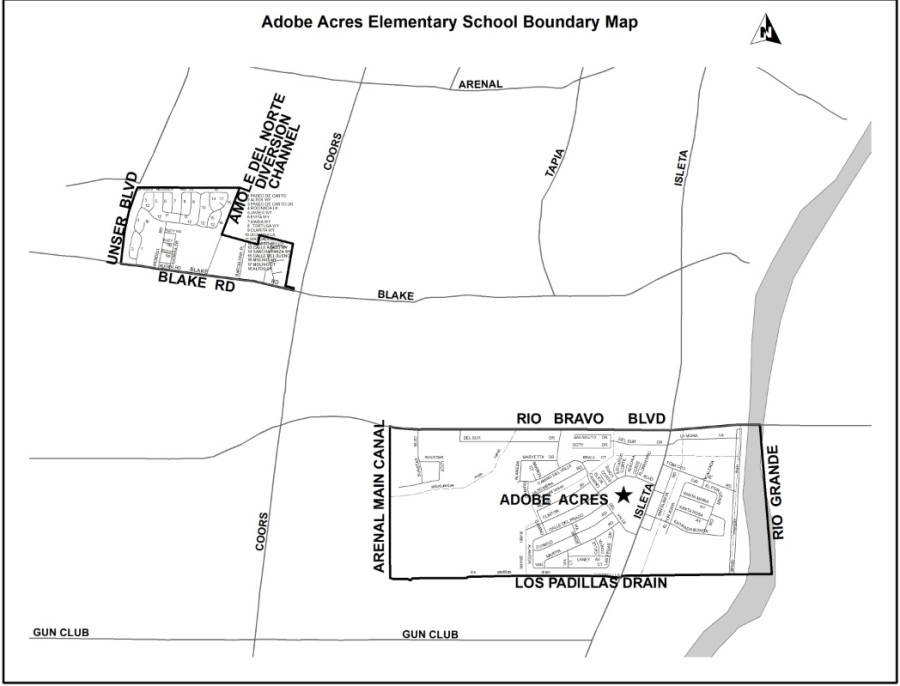 Okay, Adobe Acres is a trick question. The boundary for the elementary closest to your humble blogger’s house is positively wacky in having kids go all the way from Unser and Blake to Isleta south of Rio Bravo (roughly 3.5 miles over some of the most dangerous roads in the County). Leaving that craziness aside, inclusion of this school’s boundary is mentioned here as a simpler fix, in that students east of Isleta have to cross that busy, yet more manageable boulevard.

A rational parent would consider having their child walk across Isleta to/from school, but while there are crossing guards and a newly striped crossing with flashing beacon, all evidence shows that very few kids walk to Adobe Acres ES from east of Isleta. Fixing that will involve fixing many factors, including perceptions of safety.

We’ll finish today’s look with another twist in what has been a series of “trick questions.” Acoma ES illustrated above actually closed as an APS elementary 2+ years ago. Those kids now go to Onate ES: 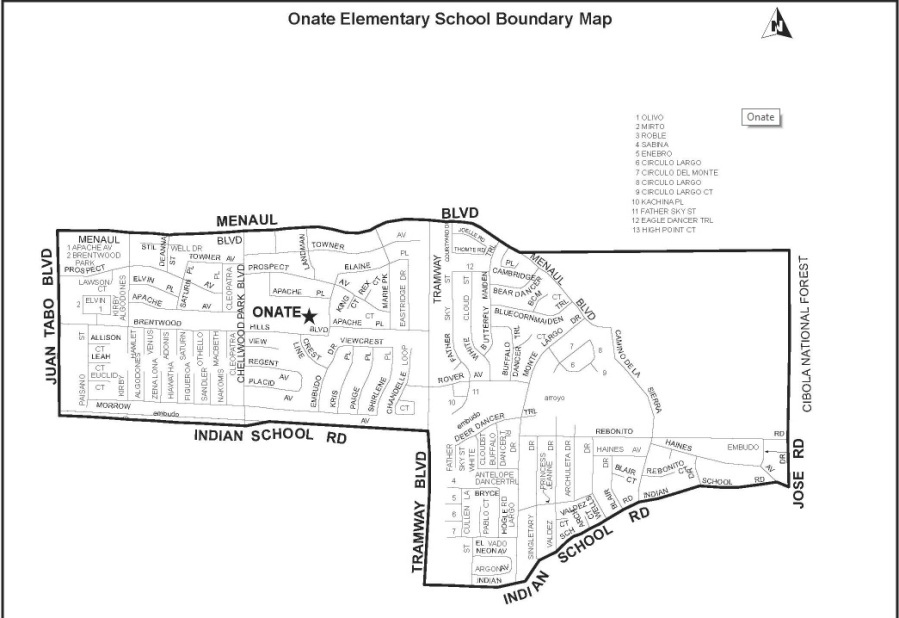 And looking again at the old Acoma ES boundary, we see the result is an even stranger, less safe situation for some, but not all kids:

For example, kids who live next door to what was Acoma ES now have to cross both Juan Tabo and Indian School. Acoma ES’s closure was due to yet another of the many layers, low enrollment. Acoma’s had fallen below 100, while Onate ES’s info webpage shows its latest enrollment at 227. Which is even more interesting when you find that Adobe Acres ES has enrollment of 565, i.e., roughly 250% the number at Onate. Ranges in enrollment/size of campus is just another of the many layers which much be peeled to solve for more safety in getting to/from school.

All these layers, and their interrelated complexity, seem a pretty good argument to focus instead solely on making routes to school safer through road engineering. This focus is strengthened ever more when one considers that traffic deaths are the leading cause of mortality ages 8-15, overwhelmingly now kids killed while in automobiles v. walking/cycling.

Admittedly, the ratio of children killed walking/biking was much higher in the 1970s/80s/90s, the “good old days” when youngins of your humble blogger’s generation and thereabouts walked and biked to school in much higher numbers. Overall, however, numbers of those killed in all three categories (motor vehicles, walking, cycling) has shrunk in the past 40+ years: 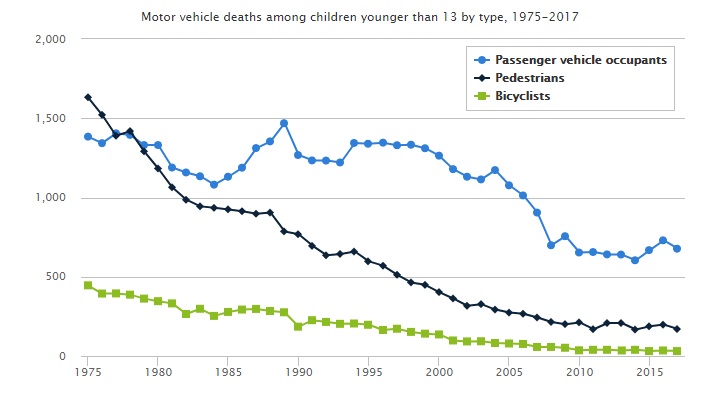 Again with the layers, the reasons for the drop illustrated above is due to many factors including child-safety seats, other vehicle safety improvements, and, possibly but not definitely, fewer kids walking and biking to school. All of which means what pretty much all research tends to mean.

Those of us who advocate for more kids walking and biking to/from school have as many layers to peel as many kids have busy roads to cross. Reconfiguring all the socio-political levers necessary to reverse long-standing trends disfavoring walking/biking is going to take time, research and paradigmatic changes in mindset.

Have a great weekend, everybody. Stay safe out there.