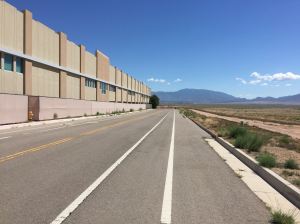 Better Burque proprietor Scot and I, on a leisurely Sunday bike ride, ended up this morning at a forlorn dead end street on the fringe of Mesa del Sol, the ambitious mixed use development on Albuquerque’s south side. Like much about this project, Stryker Road SE begins with enthusiasm (“I’m a street to somewhere!”) and ends with a couple of barricades and faded “Road Closed” signs.

To trace the trajectory of Mesa del Sol is to trace the trajectory of Albuquerque over the last decade, but it’s one I don’t think we’ve come to terms with as a community. In his 2011 book Sunburnt Cities, Tufts University urban planner Justin Hollander argues for a mindfulness on the part of sunbelt cities as the boom years end and we enter a new era. Hollander, arguing from the nation’s rust belt as an example, makes a case that in decline there is opportunity, but that you need to embrace that opportunity in part by recognizing that decline is inevitable rather than fighting against it:

If done well, depopulation can mean more room to breathe, more space for pets to run, space for gardens, and less congestion.

Written at the trough of our nation’s Great Economic Shitstorm, Hollander’s book made a provocative argument that I’m not sure has held up. His most potent examples, including Phoenix, have not declined as his book predicts. After its post-shitstorm dive, Arizona’s Maricopa County (which is really the best measure for greater Phoenix population) has returned to a growth rate of 2 percent or so a year. That’s nothing like the boom years of the early 2000s, when it hit 4 percent a year, but it’s certainly not in decline. The steps Hollander suggests – Phoenix should learn from Detroit how to cope with emptying neighborhoods, he argued – don’t seem relevant today.

But one of Hollander’s key messages – that sunbelt cities should not expect the boom times of the early 2000s to return and need to change their approach to planning accordingly – seems particularly resonant in Albuquerque. According to the U.S. Census Bureau, Bernalillo County population growth the last two years has been 0.1 percent and 0.15 percent respectively – for all practical purposes flat. New home construction in the greater Albuquerque metropolitan statistical area has averaged less than 200 units per month for years – far less than the boom times of the mid-2000s when we were putting up 600 or more units per month. We had a little jump out of the trough around 2012, but we’ve basically flattened out at what is awfully close to a steady state.

All of our major western urban neighbors – Denver, Phoenix, Tucson, Las Vegas, Salt Lake City – bounced back after hitting the post-shitstorm trough. Only Albuquerque has not, or has bounced back so little. To be clear, none of those cities has come close to matching the mid-2000s boom construction rates, though Denver is giving it a run. That was clearly unsustainable. But all save Albuquerque have returned to an urban trajectory that is at least understandable in the framework of old school sunbelt thinking – you build some new houses each year, businesses expand or some new businesses come to town, you ripple upward or outward. We know how to do that.

Albuquerque is doing something different that I don’t think we understand.

We’ve been doing Sunday bike rides out to Mesa del Sol for years. They built these big roads in the 2000s for the population boom that was to come. The lack of booming means great roads with little traffic, so as a weekend cyclist I thank you. But I wonder what coming to terms with the dead end of Stryker SE, the fact that those temporary-looking “road closed” signs will likely never come down, might mean.

John Fleck, a former journalist, is a University of New Mexico faculty member teaching about and studying water policy and governance.

Leave a Reply to Love on the Mesa Cancel reply