Dear and wonderful readers here know I was unsuccessful in my attempt to visit every brewpub in Albuquerque last weekend. Thwarted by goatheads and my own stupidity (one of my most consistent traits), I ended up at brewpub #16: Sidetrack Brewing with a flat tire and a pint of cask-conditioned pale ale waiting for a ride. Sure, I could have fixed that flat, but the air, so to speak, was out of my quest. Besides, it meant I could break the ride into two parts.

So this weekend, proving, like British one-hit wonder Tubthumping (or in this case They Might Be Giants covering Tubthumping), I will “get up again.”

And as further motivation than the repetition of a single line in a song 48 times, here is a pictorial and captioned representation of the 16 brewpubs I made it to last Sunday.

#1. Boxing Bear at Alameda and Corrales Road. My original plan called for a number of elaborate steps at each establishment including introducing myself, asking what the #1 seller is and quaffing a very small sample of said beverage. Even here, just before Noon at Boxing Bear, I could tell those steps would slow me down too much. So I decided to “verify” my presence by taking a picture of my Keen-clad foot. Much more attractive than a “selfie.”

#2. Pi Brewing. The ride from Alameda and Corrales Road to Pi on Coors north of Paseo del Norte was the most death-defying portion of the tour. I’d love to show you photos of me riding in the left lane on Coors Southbound for about 400 yards, but didn’t quite have the chutzpah to take photos while riding and having people scream at me.

#2a.  Foot verification at Pi 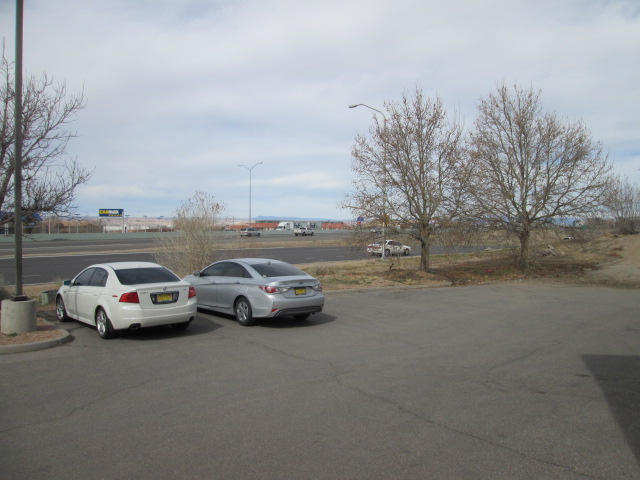 #3. Outside Albuquerque Brewing. This shot shows the grassy area I had to portage across after having ridden sidewalk (the wrong way) down Pan American, after having ridden street, sidewalk and grassy sidewalk up Alameda from Coors to the Interstate. Inconclusive, but this very well might be the site of my goathead problem.

3a. Foot, brick and front doors of Albuquerque Brewing. By this early point I’d already stopped even going through the doors.

4. Starr Brothers on San Antonio. I did go in here and the place is as roomy as this photo indicates. Btw, I eventually gave up on the “foot photo” idea, as my leg was getting too tired to elevate to the point necessary. You can just, barely, make out the tip of my shoe here.

5. Sandia Chile Grill at Wyoming and the North Pole (actually, I think it’s at Paseo, or is it Alameda). This South Valley guy doesn’t make it out to these parts much. By now I’ve decided just taking a photo of my bike constitutes “verification.”

#6. Lizard Tail Brewing at Eubank and Montgomery. This lone outpost in the NE Heights brewpub desert has a pretty tasty IPA. 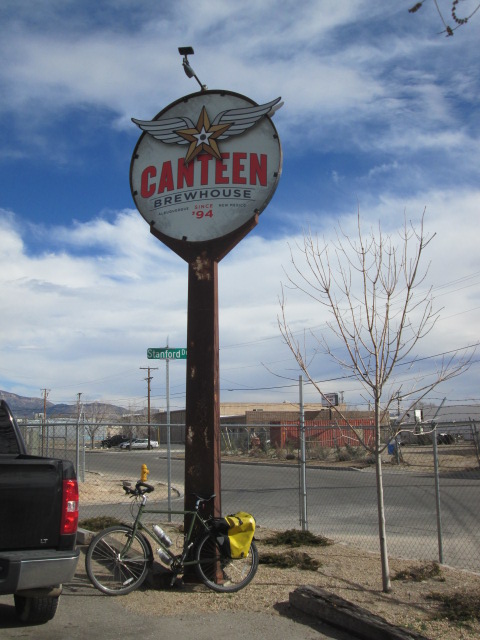 #7. Canteen, just off the North Diversion Trail in the brewpub industrial park between Candelaria and Comanche near I-25.

#8. Firkin in the aforementioned brewpub industrial area. A brand new place, I walked in and the place looks to seat at least 100 folks.

#9. Red Door on Candelaria just across/west of I-25. The owners are opening a new place in Nob Hill, but I hope this location stays open, especially as the near North Valley area west of I-25 can use all the economic development it can get.

#10. La Cumbre back in the brewpub industrial park. Snagged this place on the way back to North Diversion Channel. Kinda wished I’d stopped for a minute to have some of that El Salvadorian served in that food truck.

#11. Santa Fe Brewing at the new Green Jean Farmery or whatever it’s called. I know this is only a taproom, but I wanted to make it the Farmery. Evidently just about everybody in Burque had the same idea, as the whole “mall” was packed, a full week before this weekend’s “Grand Opening.”

#11a. The bike pole outside Green Jeans. Cool!

#12. Distillery 365 at Green Jeans. You can just make out the sign amid the hub and bub of a busy Sunday afternoon. I don’t even know if Distillery is still making/serving beer, but a friend and I had checked its earlier location in the brewpub industrial park…and it did. So I’m saying it still does and it gets to count as #13.

#∞. My bike, Monty, and I take a break at the Center of the Universe.

#13. Bosque Brewing, Girard and Central location. I was nearly struck by a car taking this shot, but I wanted to make sure I didn’t get full faces in the photo.  Once a school teacher taking photos, always a….

#14. B2B on Central. I know this is a taproom, but they have three locations now, so I had to hit at least one.

#15. Kelly’s Brewpub at Central and Wellesley. The “original gangster” Burque brewpub in a way and one probably good for a blogpost or two about its early days. 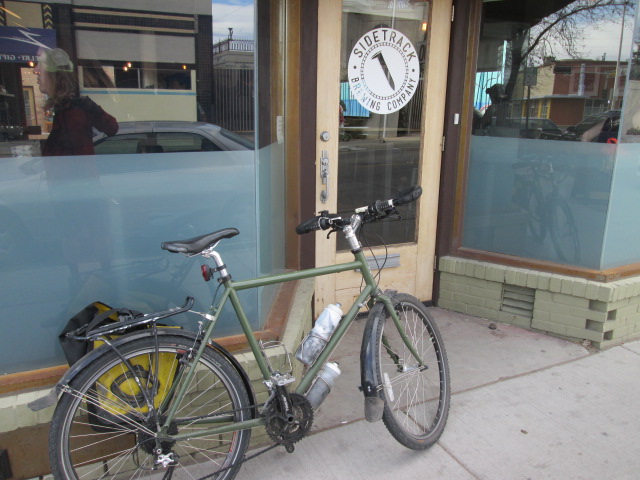 #16. Sidetrack Brewing Company across from the Gertrude Zachary mansion along 2nd between Lead and Coal.

There you have Part I. You might have noticed I missed Alien Brewpub in Uptown. To be honest, that was intentional as I: A. wondered if it was worth adding miles to my tour; B. I really don’t like Uptown, especially on a bike.

But to make this a FULL TOUR, I’ll start Part II this coming Sunday by bagging Alien, then head back downtown to wrap things up, most likely at Ponderosa in Sawmill. If you’re in the area around 4:00 on Sunday, look for the ugly green bike (or ugly foot in Keen shoes) and I might let you buy me a beer.

Have a great weekend, everybody! Cheers!