While Monday night’s more than four hours of discussion and debate over Albuquerque Rapid Transit (ART) at the City Council meeting had a bit of yelling and screaming, it was by and large a fairly sedate affair. It also provided some real chances to learn about the historical context of ART and why Central Avenue is going to get torn up so much in the project.

It’s not all about the bus.

In a somewhat lengthy introduction to his amendment calling for “slight adjustments” to project road configurations on Central from the Rio Grande to I-25, Councilor Isaac Benton gave us a good history lesson on all the 21st Century efforts by the Council, the City and many of its residents to change Burque from a city in which streets are strictly built for automotive speed to a place where multi-modality is paramount. You can hear/watch the speech at about 3:58:00 here.

Benton’s history lesson includes brandishing of several hefty reports outlining specific efforts to change Central in the Rio Grande to I-25 section and general evolution toward “complete streets” throughout the city.  The hundreds and hundreds and thousands of pages in such reports include massive amounts of rationale and general guidance, but the really fun stuff is in the highly specific details.

And that’s where we need a tape measure.

Because while concepts like “complete streets” are based in theories and philosophies of walkability, pedestrian safety, and increased use of non-automotive means to get somewhere, the details of Benton’s amendment are the same details that are at the technical core of all this theory and philosophy.  In a space only so wide sidewalk-to-sidewalk, how can we apportion sidewalks, bike lanes, on-street parking, medians, and driving lanes (plus ART lanes in this case)?

Let’s take a specific example and apply a tape measure to Benton’s successfully passed amendment. Here’s the most recent online brtabq.com cross-section at the proposed 15th Street Station (note: AFAIK, there are new/revised drawings, as Councilor Benton pointed out Monday night, but they are not yet available online): 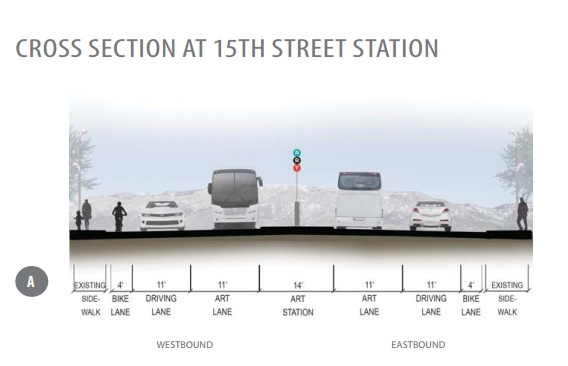 At 15th Street Station, change station design to 10’ or 12’ width. Add width to sidewalk on north side and to presently-substandard bike lanes. Bike lanes shall at this location and east to 14th street shall not be less than 5.5’ as measured from face of curb where a gutter exists.

So we’re to shave two to four feet from the width of the station and add some unspecified width to the north sidewalk and what appears to be 1.5 ft. (3 ft total) to the bike lanes, depending on one’s interpretation of “measured from face of curb.” Arguably, this just means making the north side sidewalk 1 ft. wider, even with the four foot reduction in station width. But does “measure from face of curb” mean including the *gutter itself in the bike lane measurement?

Moreover, elsewhere in the amendment, there are general calls for narrowing of inside driving lanes (not applicable here) and the ART lane itself, down from 11 feet in the current 15th St. cross-section to as little as 10.1 feet, as well as mention of buffering of bike lanes (lined space between driving lane and bike lane, ala the new Lead/Coal striping from I-25 to 2nd St) that might mean 4 ft of actual bike lane and 1.5 ft. of buffering.

Did I say the math was simple? Okay, I lied just a tiny bit about that.

Still, it is the apportioning of all these aspect details that really is the heart of ART. Yeah we’re getting some new buses, and, yes, those buses will purportedly come every 7.5 minutes instead of the 15 minutes with the current Rapid Ride. And that’s big, particularly the 7.5 minutes because it means we can pretty much stop even thinking of bus “schedules” along Central.

But ART is really about the aforementioned 66 feet and incorporation of all the hundreds and thousands of reports and plans Councilor Benton waved at Monday night’s meeting. ART is really about slowing down traffic and increasing the survival chances of those choosing not to drive on Central. The preliminary battle over taking the federal “Smart Starts” funds seems over, but the battle over the 66 feet has in many ways just begun.

*While this gutter question doesn’t change the math, it most certainly changes the multi-modal context. Cyclists HATE the idea of counting the gutter in the bike lane measurement.