After a 2015 in which the project only wobbled, a long-awaited public meeting was held last night at Mountainview Community Center to explain/discuss an even more long-awaited project: the complete reconstruction of the woefully old, inadequate and dangerous I-25/Rio Bravo Interchange.

Before a largely appreciative group, Senator Michael Padilla, project directors and staff spoke regarding the project in the typical manner (PowerPoint), enhanced by what was perceived as good news by just about everyone in the audience (there was much clapping) and a video simulation of what using the new Interchange would look like. As for looks, here’s the plan (Note: this drawing is a tad different than the absolutely latest iteration, but the project website is down as of this writing): 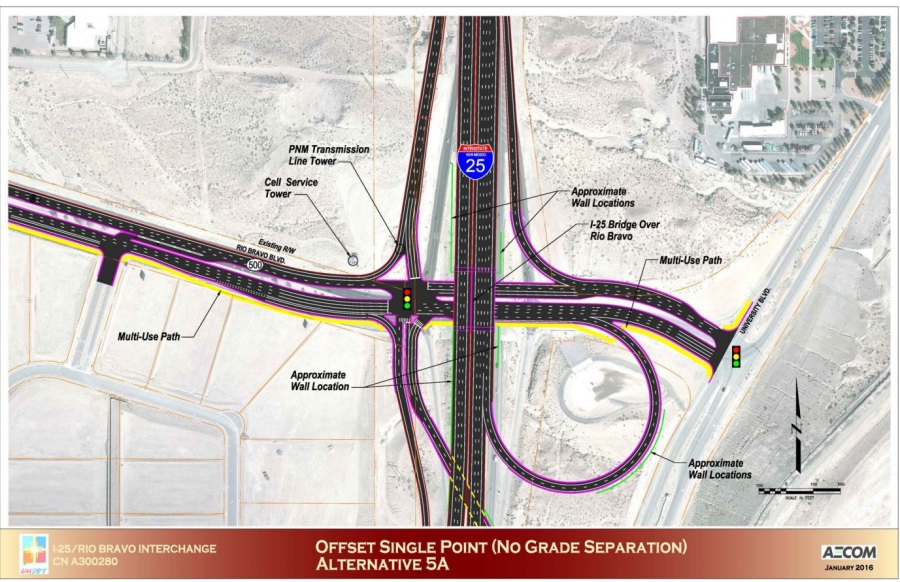 The above is available via the aforementioned project website (just i25riobravo.com for short, but, as mentioned, it appears down this morning), and that’s good, as the complexity of this project does require a bit of thorough pondering. For instance, the NW to SE dashed lines at the bottom crossing I-25 reflect the intriguing twist of the the northbound exit going under the Interstate. This “preferred alternative” is not your typical interchange project.

From the cycling/multi-modal perspective, the yellow near-continuous line running along the south side of Rio Bravo and through the Interchange is a 13’6″ multi-use path. Combined with signal light synchronization and other details, the project attempts to significantly address the largely untouchable bike/ped nature of the current interchange. Those preferring roadway over MUP will also have bike lanes uphill and what offers to be a challenging/thrilling “share the road” ride downhill (westbound).

As per normal, the proposed project has more hoops to jump through, but the current timeline has construction finishing right around the start of 2018. Construction itself will be a major South Valley disruption. Perhaps the ABQ bikeshare Bici folks could branch out into BernCo and open a few stations in the project adjacent neighborhoods to meet what might be strongly heightened demand during 2017. Or maybe rush hour traffic on *Isleta Blvd., 2nd Street and Broadway will just increase by 2000% (or more). Better Burque clearly sees you cynics out there and notes your prediction regarding whether slightly increased bike share or astronomically increased nearby arterial traffic is more likely.

But enough cynicism (for now). Have a great weekend, everybody!

*But seriously, everybody please take Coors Blvd. during construction, as your humble blog poster avoids the Coors clusterfornication like plutonium.