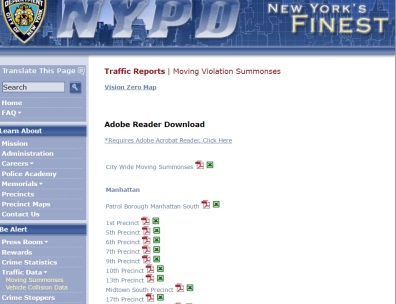 I heard a very rare story the other day. Someone told me they got a speeding ticket. Perhaps it’s because people don’t tend to open up much, but I can’t recall another such anecdote in recent years.

“Word on the street,” always told in a jokey fashion that makes it seem both farcical and pathetic, has been that Albuquerque Police and Bernalillo County don’t enforce speeding laws anymore. The first-person account I heard the other day indicates otherwise, but where can one find statistics on issuance of speeding tickets that might really dent “word on the street”?

Well, that hasn’t proven to be as easy as you might think, at least up to now. BetterBurque’s very first IPRA request has been to obtain such records, after having been bounced around between CABQ, BernCo and Metropolitan Court a bit. So far, all I’ve gotten is a link to the NM Courts website “case lookup,” page, and that’s been a dead-end. Hence the continued IPRA request.

Data showing at least a significant decline in issuance of traffic tickets, including speeding, would conform to findings in other jurisdictions around the country. News accounts in recent years from Austin and Washington, D.C. are examples of that. This trend comes while traffic deaths overall have been falling, despite a spike in pedestrian deaths.

That makes sense: *overall vehicle safety has dramatically improved, yet faster driving means less time to react to pedestrians. But without real data we’re left making statements like “that makes sense” and “word on the street.” More info is needed here in New Mexico, perhaps not necessarily quite as detailed as the **lovely data set available in New York City, or the statistical wealth found in Montgomery County, Maryland, but certainly more than can seemingly be found here.

Making our roads safer means having a better handle on what’s happening on these roads. At present, it appears we’re just leaving it all, including our public policy, up to anecdotes.

*This simple logic doesn’t include “cell phone theory” in terms of heightened distracted drivers and pedestrians looking down at their smart phones. More data collection needs to be done on this, too, with less similarly pathetic joking “aw, people are so stupid, ha, ha, ha” about it, in your humble blogger’s opinion.

**The NYPD effort is part of NYC’s “Vision Zero” webpage including graphic representation of every traffic death in the five boroughs.