There’s a certain percentage of folks who, let’s face it, think any money spent on roads for any purpose other than making the asphalt as smooth as possible, and the automotive trip from Point A to Point B as fast as possible, is a giant fucking waste of money.

BetterBurque doesn’t like to curse, but the expletive is needed here.

The question is how big that “certain percentage” is. Reading comments to stories about bike lanes and pedestrians, one might get the impression it’s damn close to 100%. Is “damn” still a cuss word? Anyway, just to pick one from a seemingly infinite number of such online responses, here’s what a certain “Chuck Carter” thinks of Tulsa, Oklahoma spending $70,000 to have noted urban planner Jeff Speck conduct a walkability study of the city:

“What a waste of taxpayer money. we are already hurting financially and now we waste 70,000 dollars.”

I picked this comment, as it’s relatively benign and not nearly as long as many such comments often go. This “certain percentage” can ramble as bad as BetterBurque on its worst day.  We think you get the basic idea and paradigm of this certain percentage of folks.

And today’s blogpost really isn’t about these folks and what they think at all.

Instead, we’re gonna look at something today that EVERYBODY can agree is a total fucking waste of money.

We refer to the $29,000 spent by the City of Albuquerque to first place, and then remove, a bike lane at Encantado Road N.E. just east of Tramway Boulevard. To give you some context, here’s what Encantado looked like before the placement of the bike lane: 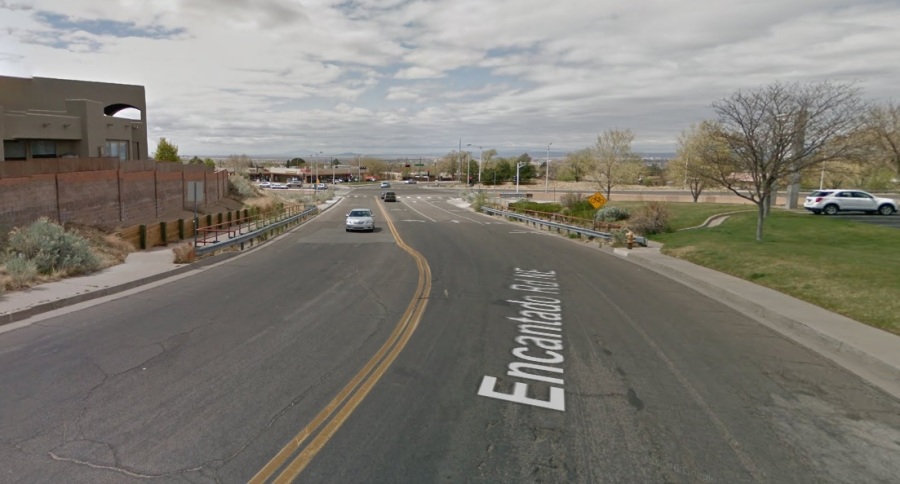 And now, zooming in a bit, here….wait for it…wait for it… is what the section near the guardrail pictured above looked like after placement of the bike lane:

No that is not Photoshopped, folks. That’s the bike lane ending directly, precisely and inexorably into the guardrail at Encantado just east of Tramway.

We know, it really does looked Photoshopped. Little details, such as the paint blob where it looks like they decided “NO, we shouldn’t have this curve continue, we should instead go straight into the fucking guardrail,” are priceless. Fucking priceless.

Long story short, the City heard from quite a few folks, some probably employing repetitions of the word…well, you know the word, and it was decided that this bike lane “treatment” was somewhat less than optimal. So the City decided to remove the bike lane, leaving a new, rather inexplicable, parking lane instead.

It cost $19,000 for the bike lane and another $10,000 to remove it. Yeah, that’s $29,000. And while we at BetterBurque have to admit we’ve laughed many, many times looking at the photo of the bike lane going into the guardrail, we admit $29,000 for a joke is kinda pricey. And in our guilt over laughing about it, we’ve come up with another way to spend about $29,000 on bicycle infrastructure that might be frivolous and may be better spent on other things, but sure as Hell ain’t as stupid as spending $29,000 to put down an idiotic bike lane and then take it back up.

We refer to purchase and installation of one of these: 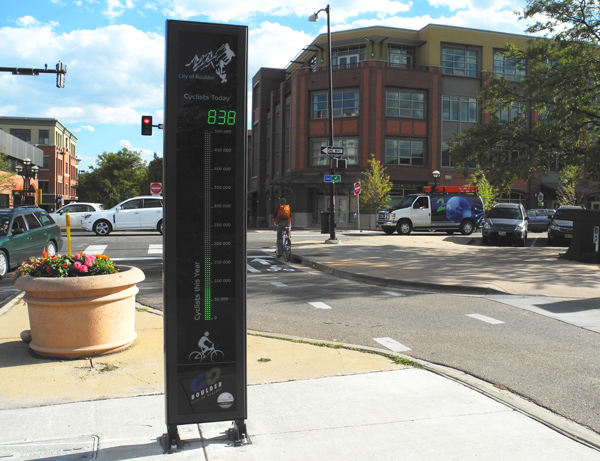 It’s an “Eco-Totem” bike counter (this one’s in Boulder) put out by the firm “Eco-Counter” in Montreal. BetterBurque saw one in Montreal while spending a month riding bikeshare there. In fact, it was this one: 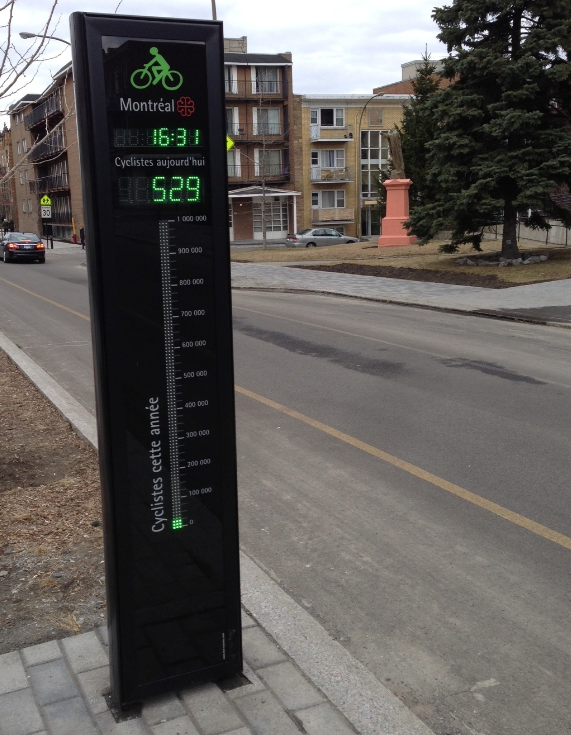 By the way, if you get a chance to ride in Montreal, do it. Do it for a month.

Plenty of cities have these “eco-totems,” (Cambridge, MA, Chicago, Portland, OR, Seattle, etc.) and they cost about $25,000 to buy/install and there’s a bit of ongoing costs that would take us right up to the glorious $29,000 spent on the Encantado debacle. For $29,000 we’d also get Tweeted reports like this one from the very popular Rosslyn bike counter just outside Washington, D.C.:

Heck, the one in Rosslyn is so popular other folks Tweet photos of their friends taken with it:

Now as hilarious as it would have been to Tweet photos of friends taken next to the “bike lane” at Encantado, we can’t find any such photos (send ’em if you got ’em). Meanwhile, there’s plenty of folks making it a point to ride to the Rosslyn bike counter.  It’s a destination.  And yeah, it also counts how many bikes have ridden by it, which is kinda cool, especially in a city where getting accurate bike counts is harder than finding good Ethiopian food.

And yeah, it would also cost as much as the fucking debacle at Encantado, and would be seen by a certain percentage of Burqueans as a waste of fucking money. But would it be nearly as big as waste? Might it make just a tiny bit more sense than engineering a bike lane directly into a guardrail?

Anybody interested in such a counter can contact BetterBurque and help us put together ideas on funding sources, presentation materials and the like. Something truly good might come out of the Encantado mess, even if that something good is merely the debacle’s utility as a pathetic joke. Which it is. A pathetic fucking joke.

One thought on “Burque’s Encantado “Bike Lane” and Another Way to Blow $29,000 on Albuquerque Bicycle Infrastructure”