From 2004 to 2015, my job at Lomas and Girard meant a bike commute through downtown and up Martin Luther King, Jr. Blvd. MLK was my good friend going up the hill each morning around 7:30 (well, actually about 3 out of 5 weekday mornings a week), and quite a bit less friendly going down the hill around 4:00. In fact, I ended up choosing to ride through UNM and hitting Silver or Lead back downtown in the afternoon, as:

Now, no longer having vocational need to bike commute up/down MLK, Jr. Blvd., I haven’t been cycling my old friend three time a week throughout its current repaving/reconfiguration. Revisiting it yesterday, I took a few snaps and measured lanes for the Broadway east to High St. portion that has been done so far. Here’s a look:

The measuring tape tells us that’s a full 10 feet of bike lane + buffer. I seem to recall earlier drawings with 8 feet of lane and 2 feet of buffer; this 6:4 ratio makes more sense, particularly in terms of squeezing the bike lane down to a width less enticing to motorists, who might be tempted to make it a travel lane. No cross-hatching on the buffers, yet. By the way, I timed a pickup truck on Edith waiting for the light to change. It was a full 78 seconds of waiting. About five times over that 78 seconds the guy tapped his accelerator, as if contemplating running the long-winding red. He stuck with it, though. Can’t imagine everyone waits that long. 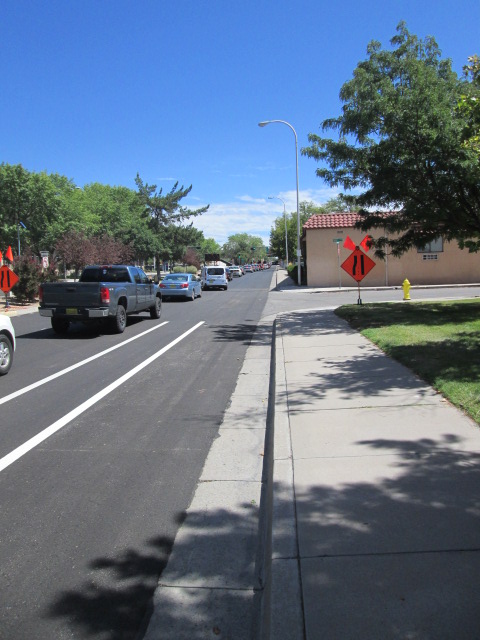 As mentioned earlier, this is the end of the current bike lane/buffer striping. Hard to tell from my poor photography, but that’s a steady stream of cars waiting, many cycles, for the light at I-25 frontage. If you squint really hard, you can detect that motorists are conforming to the bike/buffer lines well after they disappear. The orange construction signage was out in force, perhaps helping, as were signs setting the speed limit at 25 mph. No need for any speed limit sign in this long (for ABQ) lines of idling cars.

No longer having a need to keep going up this hill to get to work, and it looking a bit dicey further up, I just turned around at this point, marveling at the high level of compliance with “invisible” striping. 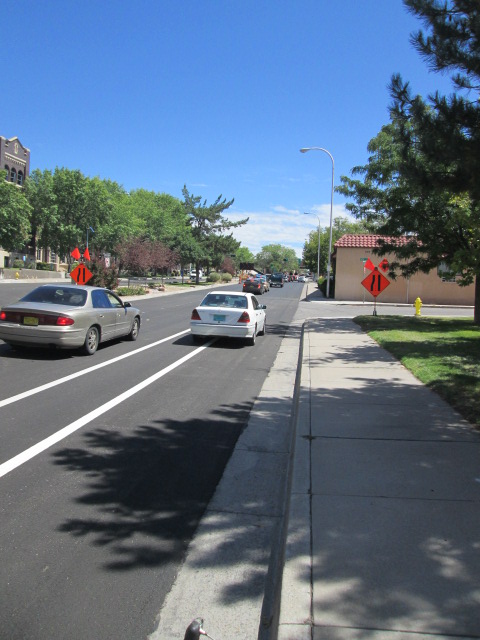 #3: Another look up MLK Eastbound at High St.

Okay, maybe the compliance wasn’t exactly 100%. That said, the motorist in the nearest white car invading the bike lane turned right on to High St., only “cheating” around the one car to the immediate left. Squinting hard, you’ll see another white car eschewing the invisible bike lane concept and scooting around several cars to turn right on the frontage road. All-in-all though, motorists seemed pretty chill waiting through the light cycles. Perhaps this is where I should point out I visited the area around Noon on a Friday. I’m wondering how “chill” things currently are along this stretch at other times of weekday. 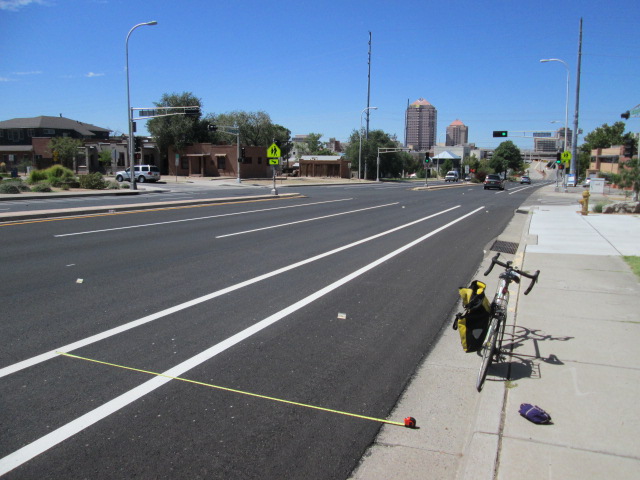 Looking downtown, we have the same measurements going downhill, right at 10 feet of lane/buffer total. Going further west, I detected none of the scheduled “Copenhagen Left” treatment to get cyclists safely left/south onto Broadway from the bike lane, only the now-typical squiggy of the bike lane in-between the straight-ahead and right-turn travel lanes at the Broadway light. I might have missed something, as I caught the green light and just looked for “Copenhagen” while also conducting the whiplash-inducing swiveling needed to make sure I didn’t get hit. Still, I don’t think the project has gotten to Copenhagen, so to speak, yet.

Overall at this point, things look to be moving apace toward making MLK an even better cycling option than in the many years I used it to get to/from work. Still plenty of project components left, however, particularly, it appears, through the vitally important I-25 interchange. Treatments made at that juncture will determine, more than any other part of this project, whether more “enthused but concerned” cyclists feel safe enough to use what I, in my more enthused than concerned state of mind, always found to be a wonderful downtown-UNM connector. I’m very interested in what the post-treatment bike counts will be, and really wish we had solid “pre-treatment” counts to compare, but the need for such counts are heavily dampened if MLK and I-25 ends up not looking safe. The ridership just likely won’t go up.

More to come as more comes to MLK. The weekend is scheduled to be a cooler one; maybe, after the high winds subside, you can check out my old commuting friend yourself. Regardless, have a great weekend!