Contributing today, in what we hope is only the first of her countless essays here at BB, retired city planner Coco J. Harris examines an alfalfa field that has become…

Las Estancias – local units of the Spanish feudal “encomienda” system that depended on the indentured servitude of natives. Also, the name of a confusing maze of poorly connected retail “malls” in the South Valley. 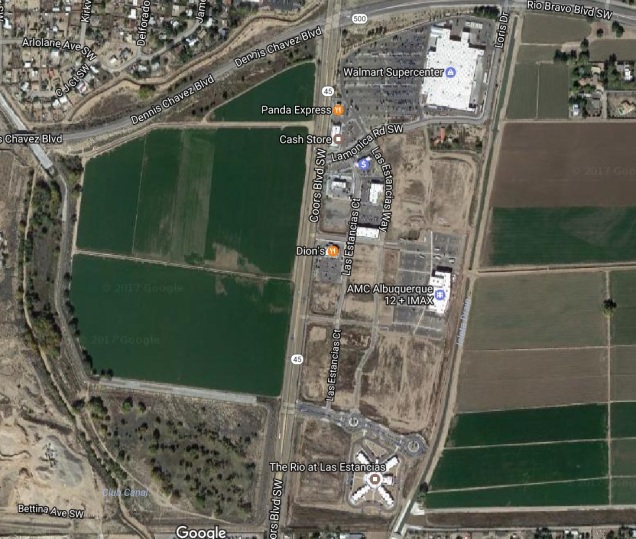 The Journal recently showered praise on Las Estancias development (bird’s-eye view above) as benefiting the “long-underserved” South Valley area. The area’s county commissioner, Steven Quezada, implies that retail space is a “service” long-denied residents. He talks about it like it’s a triumph of environmental justice instead of a strip mall.

Apparently the development needed a boost.  It’s been nearly ten years since the proposal surfaced. It’s like the Spaceport of South Valley retail. But we’re assured things are looking up. The glacial pace of build-out is blamed on recession. The paper thin reasoning behind turning 80 acres of family farm into parking lots and stores is repeated, unquestioned. The valley needs more retail space.

If we believe our eyes, there are lots of vacancies, closings and empty properties peppering the valley. Space doesn’t look like a problem because it isn’t a problem.  The broker for Las Estancias says they’ll build-out to 550,000 square feet in 2-3 years. The County estimated the entire South Valley trade area can support 260,000 additional square feet of new retail by 2030.

So they got it covered.

Las Estancias, like the Walmart next to it, was farmland before development. The real estate broker describes Walmart as “the first big-box pioneer to open up in the South Valley.” Just like the Mormon Battalion, they platted the way for the Gadsden Purchase – or Las Estancias. “The dominoes start to fall,” as the broker describes it. No vacant land is safe.

Instead of disproving the need for more retail, the presence of the new Walmart justified the zone change. The different jurisdictions were a factor in approval too. Walmart is in the City of Albuquerque and Las Estancias remains in the unincorporated county. The county has pushed to urbanize and has a tendency to compete for new development.  This benefits development but its hard to see what race-to-the-bottom overbuilding does for anyone else.

Unless you’re a real estate broker, of course – or one of the “competitors vying for business space and a piece of the retail action.” But surely not all small businesses enjoy the prospect of jockeying around the real estate market for the lowest rent in the next half-baked shopping center. It’s sure a piss poor way to try and anticipate what public services are needed and where. You can’t manage what you don’t measure.

The development process is fractured, incremental and difficult to follow.

Zoning is viewed as a tool for unleashing development, not controlling it. Saying yes to a zone change implies a world of development possibilities. As an economic development strategy it is deeply flawed but extremely popular.

Zoning doesn’t make development happen. But government attention and investment is drawn to promises represented by zone changes. Without a planning framework to prioritize public investment in existing neighborhoods, those areas aren’t on equal footing.

Looming over Las Estancias and the real estate game is the prospect of Santolina. The county recently blanketed the so-named 14,000 acres of the former Atrisco land grant with development approvals and tax districts.  The apparent desperate attempt to spur unbridled real estate development will undoubtedly shake things up. There’re certainly no assurances that tenants from everywhere else, including Las Estancias, won’t take off for the first phase of Santolina.

But no worries. Cumulative impacts of development county or city wide aren’t addressed or tracked in any systematic way.

Las Estancias is nothing to crow about. It represents a misplaced optimism in land development as economic fix that typifies development approvals. It should be a cautious reminder about how thinly we’ve already spread ourselves and our infrastructure.

One thought on ““Las Estancias” Worthy of Pride or Consternation?”