I write, comfy and dry, this morning from the rustic Château de Crécy in the heart of Bordeaux wine country. Birds chirp in the cool stillness of the morn. It’s so relaxing one finds themselves irrationally trying to uncover things worth worrying about.

Yesterday there was no need to try. Plenty of bike touring worries were prominently on display, namely wrong turns, torrential rain, lightning, and that good ‘ol touring standby, the flat tire.

I’m sure Bordeaux is a lovely town, deserving of its UNESCO World Heritage Status and all that. It even has bike share, as you’ll see below.  Nevertheless, all I will probably ever recall about the place is seeing, as well as one can see with veritably blinding rain pelting their eyes, my front panniers half-submerged in street flood waters, again and again.

So after two weeks of rain-free touring, aside from a sprinkle or two, the probabilities regressed to the mean by dumping a true tempest on me and Bordeaux. The heaviest rain lasted about 40 minutes, with more following off and on as I ventured forth from Bordeaux to the comfy and dry Château de Crécy.

The capper was getting a flat only about 2 km from the château, about 95 km into an eventful day. Oh well, best to get all these things out of the way.

And as you’ll read below, Day 15 was an anomaly amid the far more plentiful wonderful days I’ve had, these last few on mostly table-top flat, straight roads allowing me to cover significant ground amid lovely rural settings.

Restored by a 12-hour sleep from a 12-hour bus ride during a lovely stay at Ferme de Honzac (Gilles, the owner, has a photo of yours truly on the Facebook page), remarkably pleasant kilometers were had along the Eurovelo 1 cycle paths, or what the French call
“La Vélodyssée,” which is kind of a dumb name for a terrific path.

Gilles, the owner of the gite in Tarnos, traded photos standing beside the bike (which still doesn’t have a name).

Tarnos stakes out a claim in the competitive “prettiest water town in France” contest.

This Eurovelo 1 is kinda nice.

A trip focused on ocean now transitions to one all about rivers. I like both, and like how the same element of water evokes such different, yet similarly heartwarming, thoughts and feelings.

Oh, but there was a still beach view or two. By the way, do not attempt to take your touring bicycle on a boardwalk over a dune featuring a grade of about 10%. Walking uphill was just work; downhill was patently dangerous.

The small village of Linxe happened to be holding a flamenco and music festival. Here’s an Argentinian duo playing a flamenco-influenced tune.

65 miles on a bicycle sounds further than it appears, mentally and physically, by the third week of touring. This is particularly true when the road is pancake flat much of the way.

Leaving the Eurovelo/coast, I began the steady northeast path that will hope to have me in Nevers by July 4th. I’m meeting my wife there, and it would bad form to miss that “date.” So, as the Strava data link shows, I veered east from the bay at Biscarrosse. Despite being off the Eurovelo, road traffic was light and the riding, even at the 65 mile point, was easy.

Something I never saw in Portugal. Milk sold cold.

And another thing I didn’t see in Portugal. Bullfight ring in Parentis-en-Born. Given a bullfighter was killed performing in France only a week or so ago, I wonder how much longer the “sport” will last here. 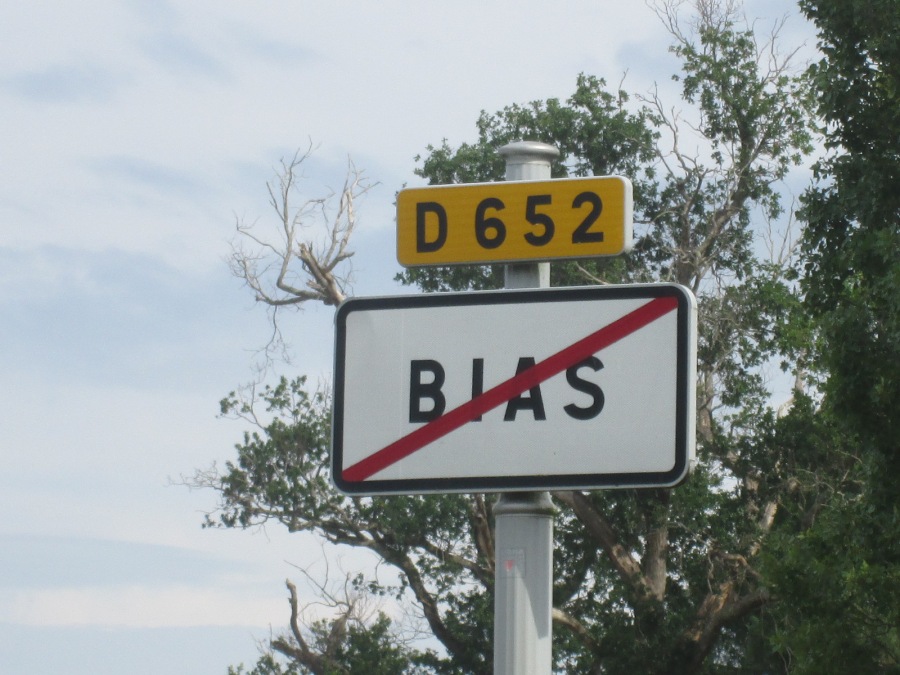 A heartfelt plea for objective journalism and fact-based public policy 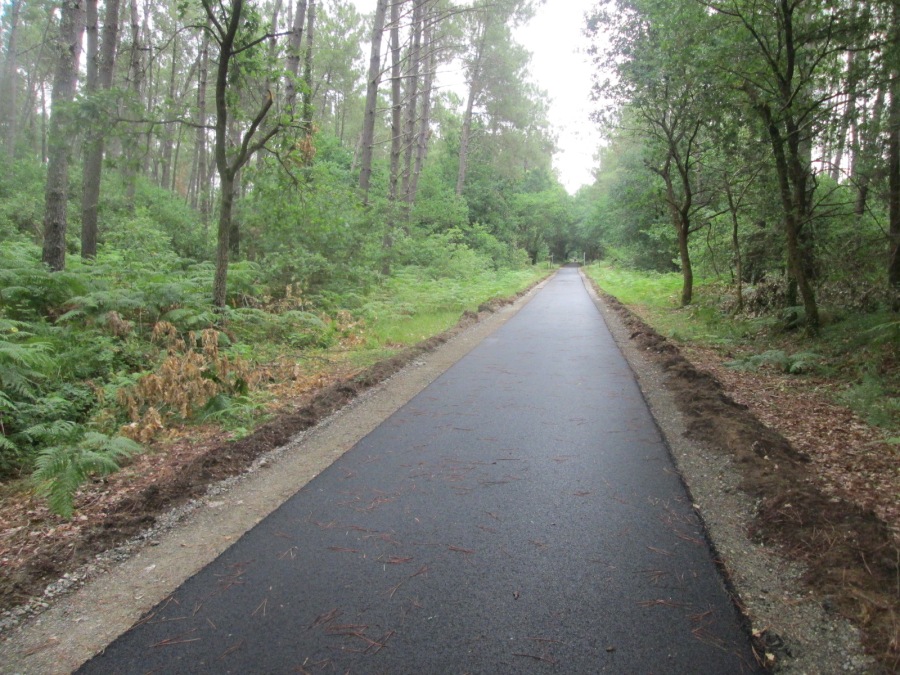 I think this stretch of path was finished about 12 hours before I traveled upon it. 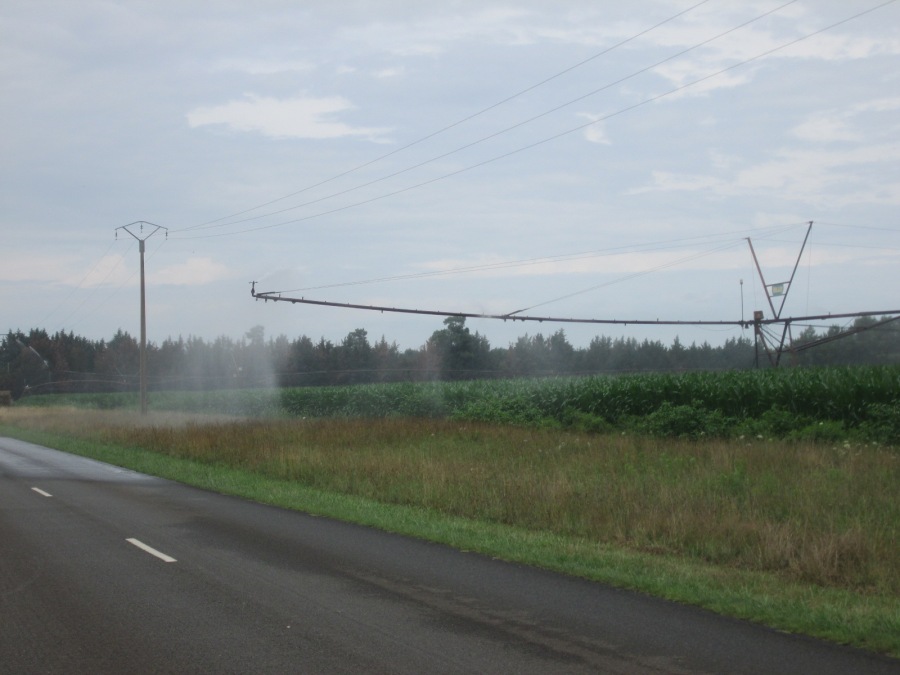 In its flatness, I found myself suddenly in the Iowa of France, pleasantly showered upon by the irrigation. Less pleasant “showering” would occur the next day.

Bad news sells newspapers and blogposts, so naturally I “lead” with the drenched travails of Bordeaux and environs. Bike touring plagues aside, it really was such a “bad” day that it was funny, informative, and memorable. I won’t soon forget standing under the scant butcher shop awning as the shop owner told me and another rain escapee that he was closing and it was time to move back into the deluge.

Then there’s the entrance to the wrong bridge over the River Garonne, instead of the only one that allows bike/ped crossing. Pouring rain and trucks entering major highways are not good, especially in bike tour combination.

Still, eventually I witnessed the bridge to that most Holy Grail, the sign in that most religious of cycling colors (green) denoting the direction to the Pont Mitterand, the lordly bridge named after my new favorite French president ever.

All this madness then finally led to the overarching reason/Grail for this particular route, the Roger Lapébie bike path, named after the winner of the 1937 Tour de France. As if to prove my sanity, the path was smooth, splendid, and popular. I saw quite a few folks, like me, soaked to the bone with smiles on our cycling faces.

And, another ~100 km and five plagues later, the day ended at comfy and dry Château de Crécy. Truly one of the greatest days I’ve had in roughly 30 weeks of touring over the years.

One of the few snaps taken amid the deluge, I’m here under the aforementioned butcher shop awning looking at a bike share station. Note pooling of water between the cars. This would deepen and become roadway-wide later in the downpour.

“Ye who seek the Grail must answer me these questions three. What is your favorite color?” Green. Definitely green.

Being on one side of this guardrail makes ALL the difference. Now imagine walking a bicycle on the truck side of the guardrail. That was my experience near the approach to the Pont de la Maye further south, but with more rain. Pont Mitterand, on the other hand, was truly the bridge to the Grail. 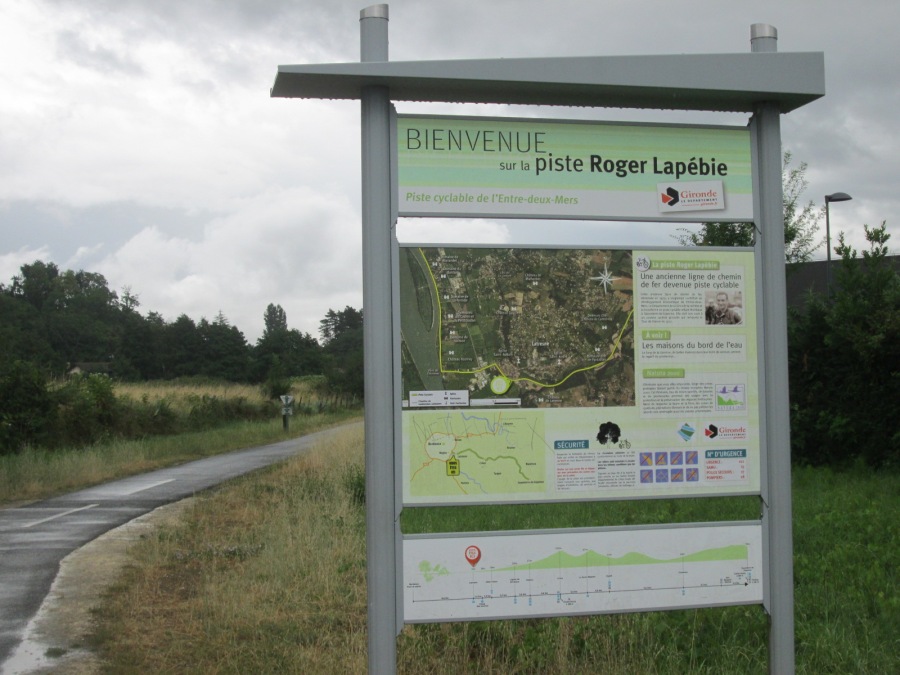 That Grail being the Roger L. piste cyclable, about 40 km of ultra-smooth path through hills and dales. I rode about 20 km of it before heading to Romagne, fixing a flat time, etc. 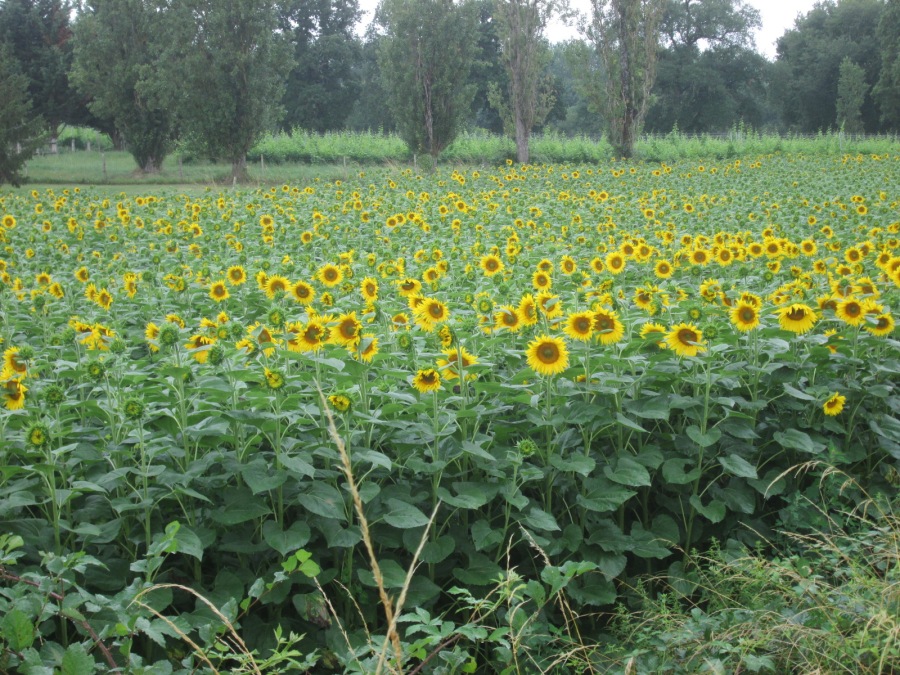 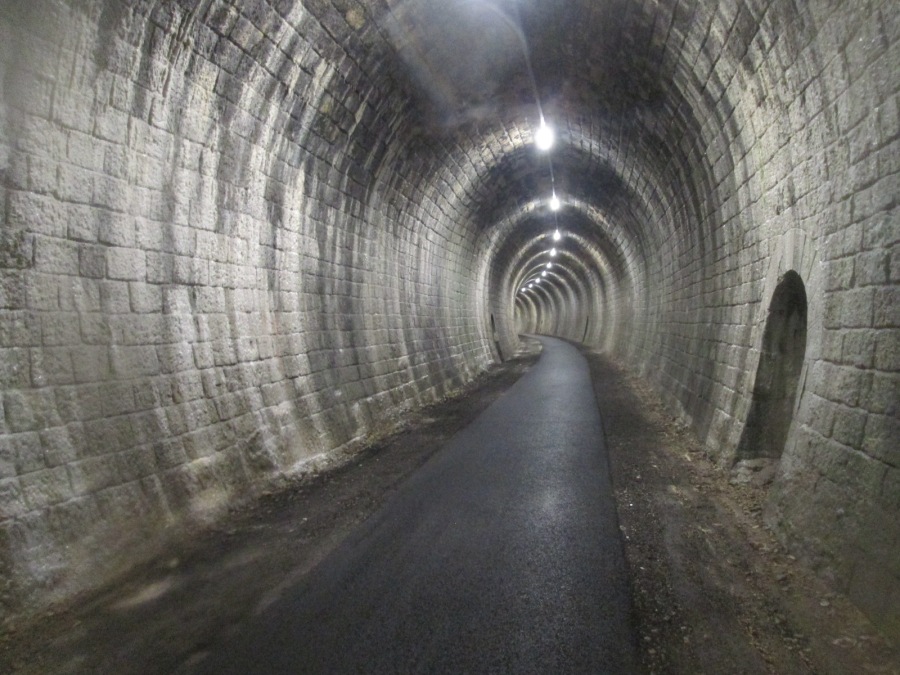 I came upon a dark tunnel just hoping to get out of the rain for a minute, and to test the power of the dynamo hub light. As I entered, voila! motion-sensor lighting. This Roger L. bike path is world-class classy. Notably, such lighting would have been extremely handy new Paw Paw, West Virginia on the C&O Towpath in an earlier bike tour.

A quick snap of my rest day digs before brief sun is replaced by another shower. My hopes are that all the rain for the Summer happens today, but the forecast the next three days isn’t looking hopeful.