Almost all positive reviews of bicycle infrastructure follow the tired and overly true model of “I love this new bike (X), now here is what’s wrong with it.”

I will try to avoid use of this model is reacting to the work done so far on the long-awaited (first public meeting in 2012) Girard Boulevard Complete Streets Master Plan, a project that goes back even further than Albuquerque’s adoption of “Complete Streets” language itself.

Remembering this history and its implication on what constitutes “good” bike infrastructure is important, as what is considered “da bomb” one year is passe and even considered by some dangerous only a few years later. It’s tough keeping up with the rapid changes in thought on how streets should be laid out, a good problem to have, when you think about it, compared with the glacial changes of traffic design and engineering in the “simpler” days where 85th Percentile Speed reigned without any regard for, well, much of anything.

The above is not a caveat in my general love for the new Girard, only context. Take for instance, this view of the new Girard alongside Puerto del Sol Golf Course at/near Kathryn: 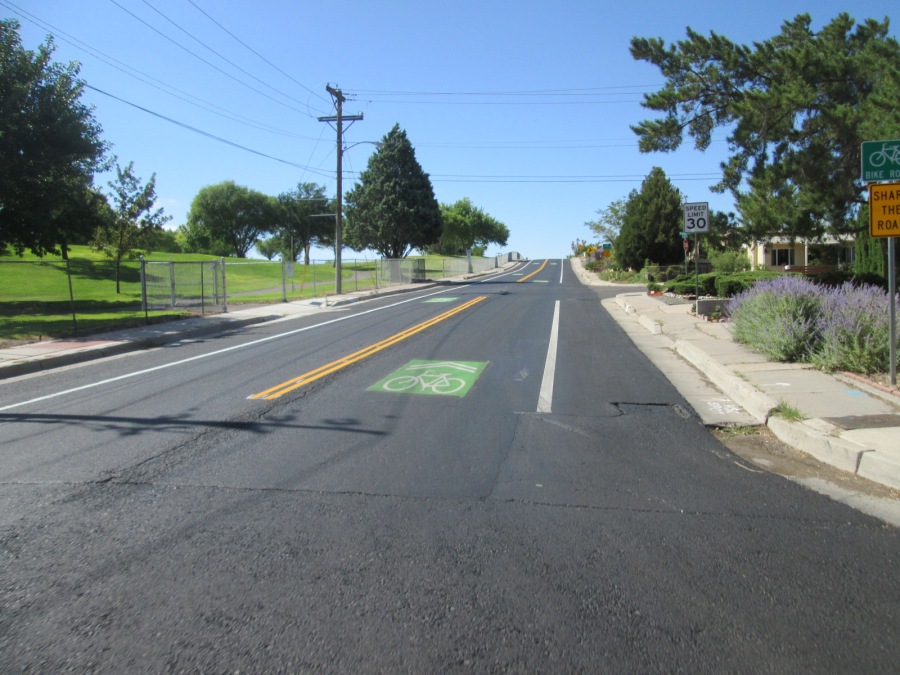 That, my friends, is a narrowed driving lane, a green-backed sharrow and a bike lane heading up a hill, except for when somebody is parked, legally in many places along the new Girard including this section, in the bike lane.

Is it perfect? No. Is it a hell of a lot better biking up this hill than previously? Hell yes. There’s plenty to nitpick here, the sharrow sign perhaps prime pick, but

I guess the three points above indicate where my reviewing “paradigm” is at present, especially #3. What will get more cyclists on the road?

The new Girard will do this.

Let’s look a bit further north, heading north-bound between Silver, and its new iteration of bike boulevard and Central. 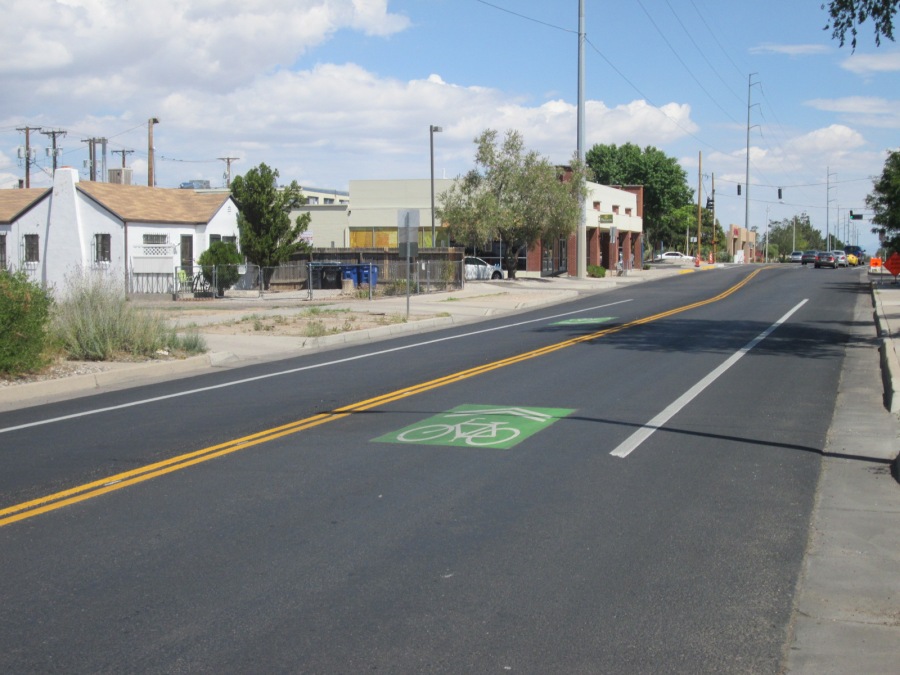 Same idea as along the golf course in this narrow section of the original Girard, with combo bike/parking lane. Note this photo was taken on a Sunday morning; it will be interesting to see how many Bosque Brewing patrons park here. Regarding the green-backed sharrow, now that we’ve used this style on Girard does that not mean we must use it everywhere, e.g., the newly repaved sections of Comanche. Once you go green-backed you can’t go back, I say. 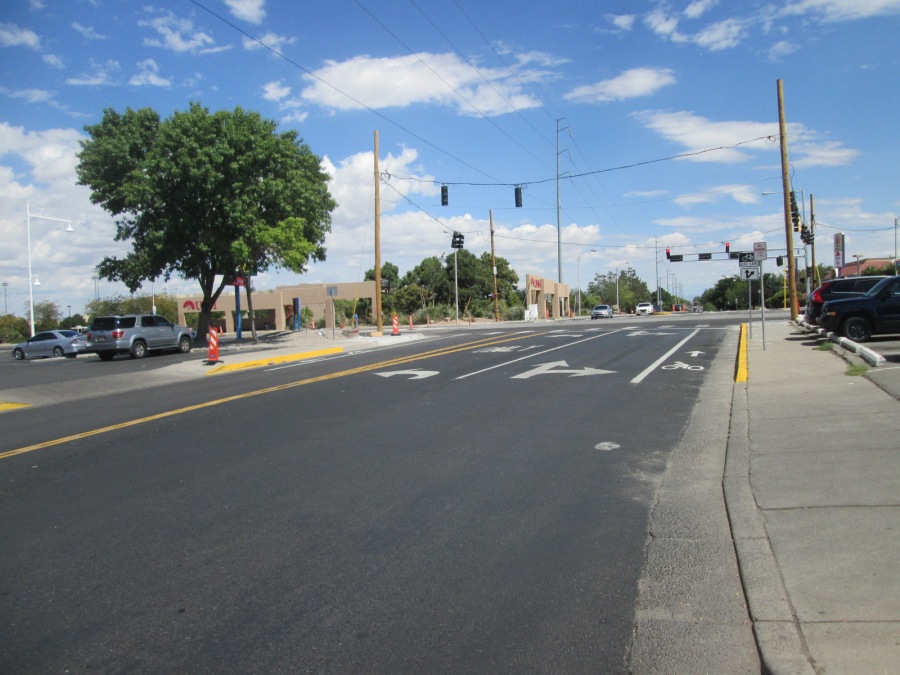 Nudging our way to Central, we see an narrower orphan bike lane reappear (if one thinks of the combo bike/parking lane as a bike lane). This works to separate users at the problematic Girard/Central/Monte Vista intersection, but a few flexposts might help. Note the orphan lane also ends southbound, rather uselessly in that case. 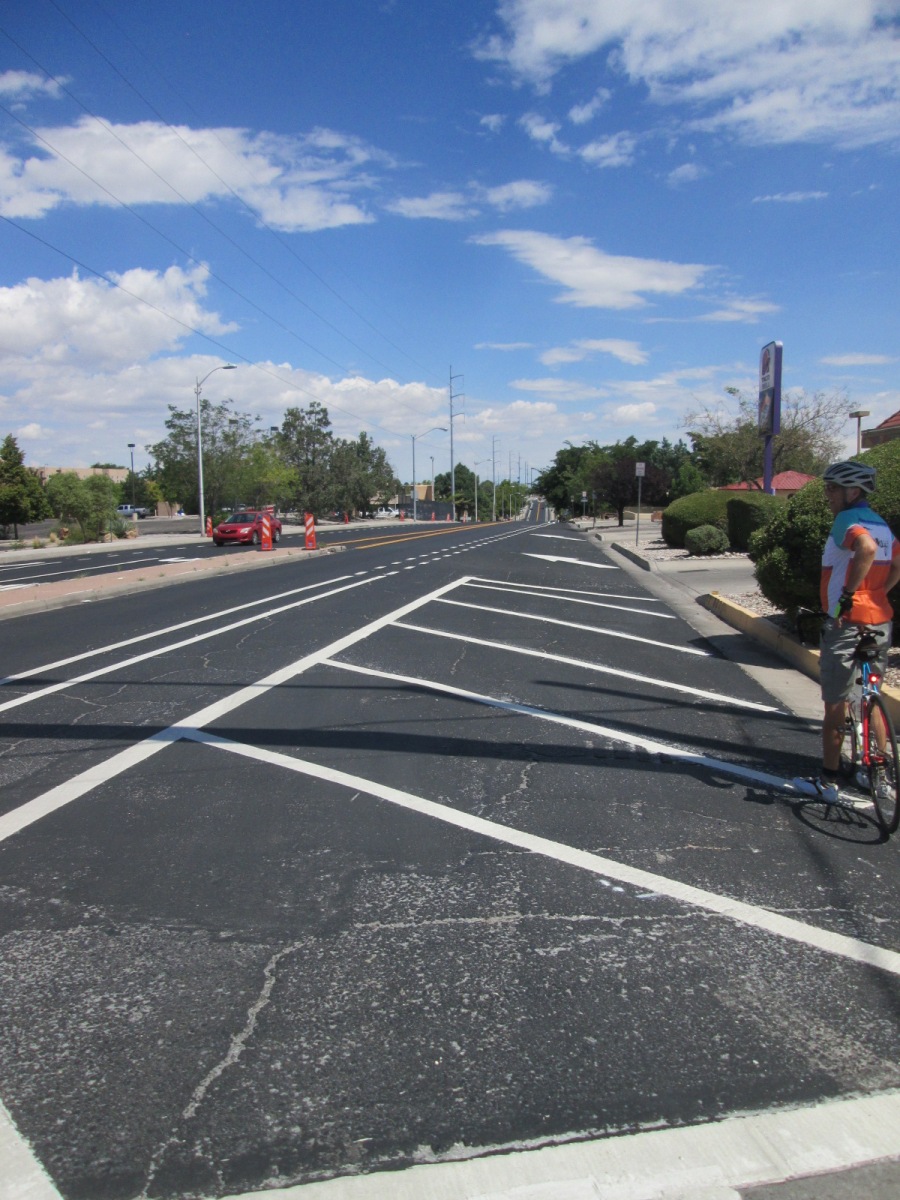 Crossing Central north we get to the most exciting and important improvements. Here blurry cycling buddy John surveys the myriad striping alongside the Taco Bell and funky strip mall along Monte Vista. Lots of hatched striping moves cars to a much narrower Girard, and a buffered bike lane forms after an extended conflict point from the Taco Bell, etc. Does this design eliminate the conflict point? No. Is this far better than the previous Girard? Hell yes. 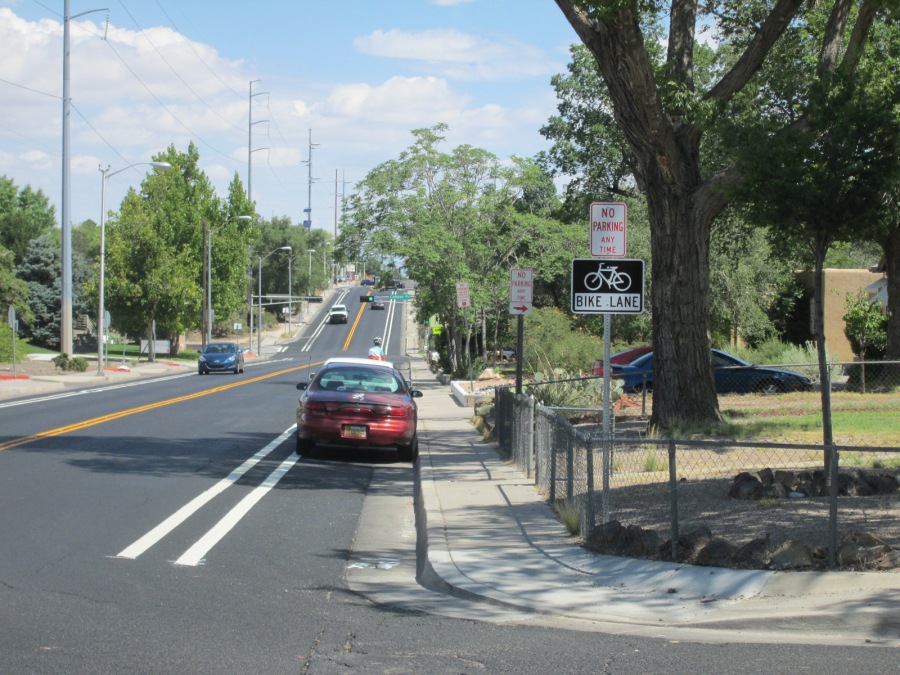 Heading downhill to Campus northbound we see the parking inconsistency at its most acute. No parking for a bit at the intersection, then permit parking starts up. One wrinkle to keep in mind here is that we’re going downhill. Personally, I find such parking in the bike lane far less objectionable going downhill than up. Hence no parking going southbound here is far more important. Your mileage, and umbrage, may definitely vary fellow cyclists. 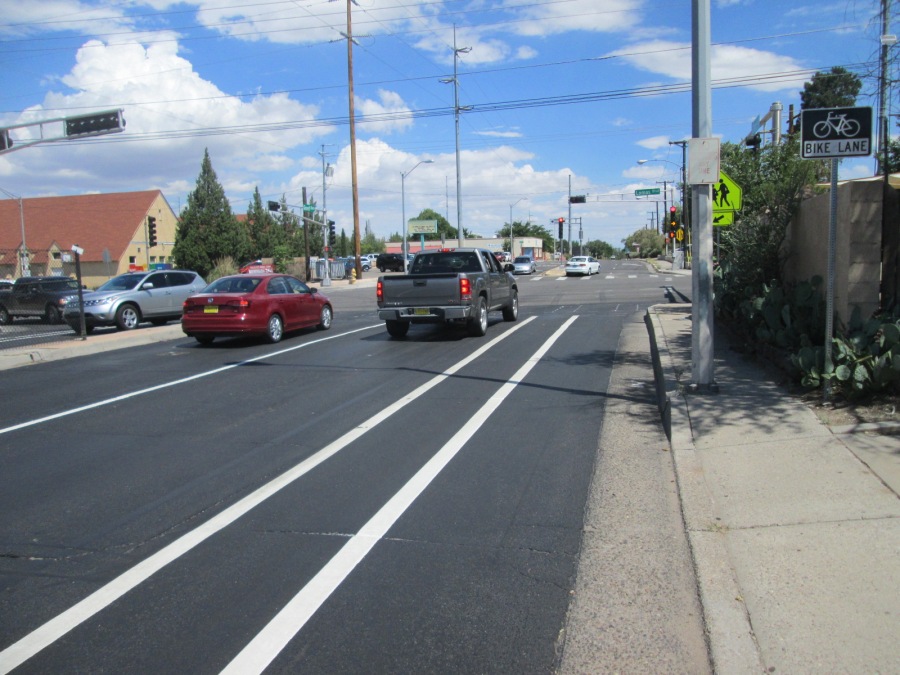 And then a bit further north we get to what is, in my mind, the single biggest reason for this project: Girard and Lomas.

I worked for a dozen years at Jefferson Middle School on the NE side of this intersection. When not cycling to work myself, I drove (*never rode) up this hill mornings watching student after student slowly wobble their way up, wobbling around the trash bins on “trash day” and generally endangering their lives.

The continuous buffered bike lane here is FANTASTIC. One addition that will make it officially FFF (Fan-*******-Tastic) would be a few flexposts between this last driveway and Lomas. In fact, Better Burque calls for flexposts all around this intersection. Looking southbound, we see why they’re needed there as well: 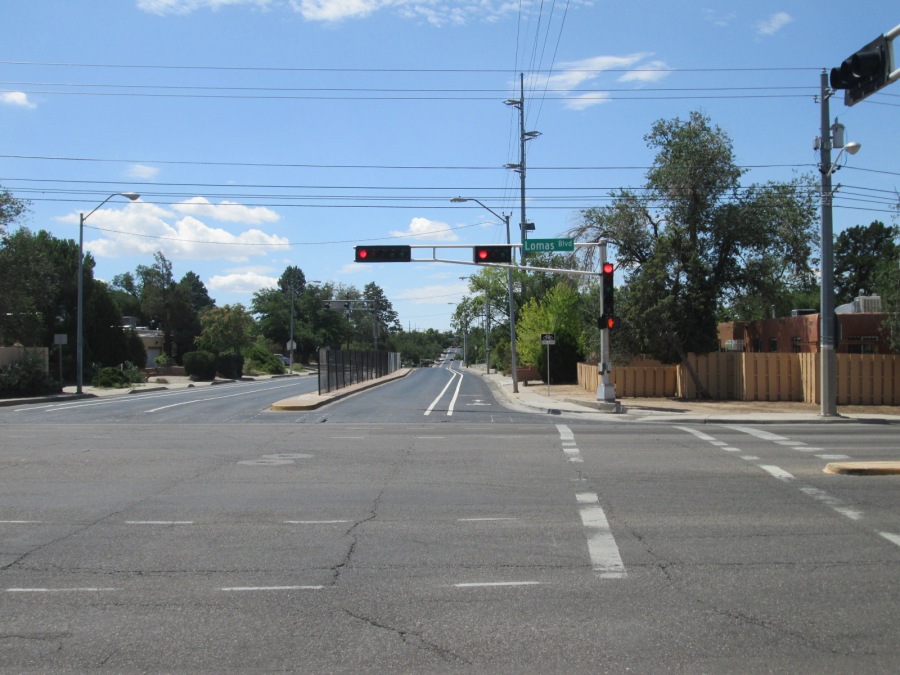 Not an ideal photo from the other side of the intersection, but flexposts in the buffer would help address a real problem at Girard/Lomas: Drivers whipping northbound on to Girard at unsafe speeds. Posts here would help. Of course they would not eliminate the problem, but they would help.

Let’s repeat that last sentence to close this review: Of course they would not eliminate the problem, but they would help. If the standard for assessing the Girard “Complete Street” is perfection from the standpoint of cyclists, it doesn’t come close. But that standard is unfair and impossible.

Yes, I know some people reading this review do not agree with me on this point.

The standard should not be perfection, but increased safety and, concomitantly, ridership. Did plenty of folks ride Girard before this project? Yes, quite a few. And this project is not for them. They were already “sharing the road” and may very well not even take advantage of the bike lanes and such.

But projects like this aren’t designed for them. They also are designed to be actually implemented, and compromises are essential to making plans a reality.

With these thoughts in mind, I wholeheartedly praise the new Girard Boulevard. Now, dear ABQ, let’s talk about those flexposts.

More to come on that in future postings.

*Note that I ride about 4,000 miles a year, bike commuting about 100 days a school year, yet would not ride up this hill. Yeah, it was that bad)