In the bike count land of the largely blind, Strava counts are King. While entities such as MRCOG do collect a growing set of data regarding how many cyclists are out there, it’s a costly, time-consuming process that still has a way to go in fully documenting usage.

If you’re a user of the site/app Strava, you probably know it not only keeps track of you and your selected “friends'” rides and runs collected through a GPS device, it also plots out the rides and runs of ALL Strava users. The Strava Global Heatmap site is fun, but, unless I’m mistaken, Strava decided to monetize this metadata post-2015, and sells it to entities like MRCOG.

The sold data also has actual counts as opposed to the simple intensity of color approach found online for 2014 and 2015. Here, courtesy MRCOG, is a look at bike commuter counts on Silver, Lead and Coal from January 1st to July 31st of 2017: 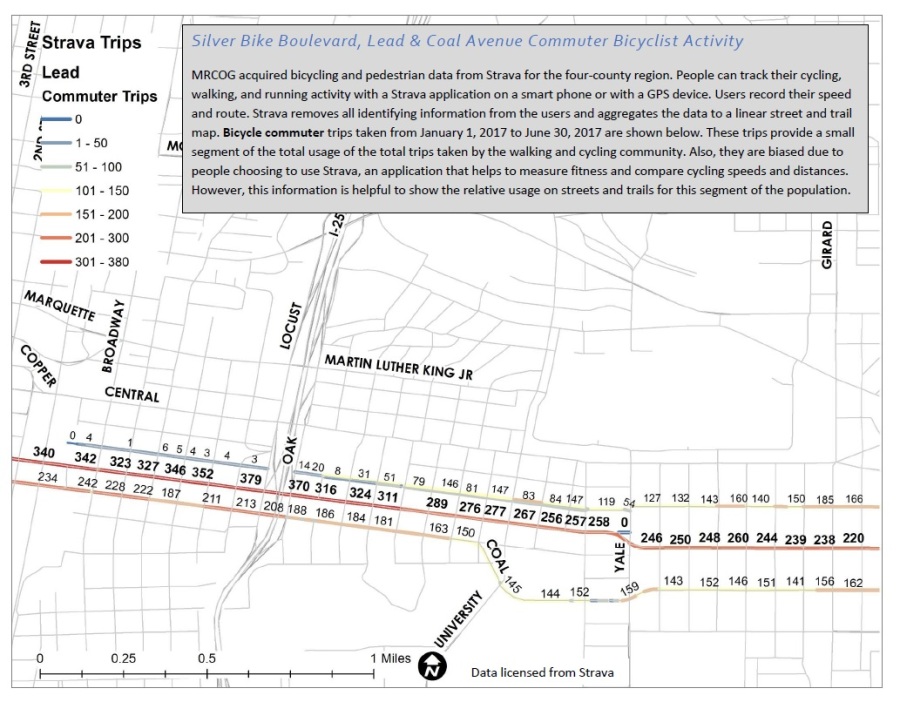 Is that not the coolest thing since Steve McQueen?

Yes, Strava is “one-eyed” in that it only compiles the small, frustratingly unknown, percentage of overall cyclists, but there’s still fun stuff in the numbers above. Note, for instance, how many more Strava riders go down the hill on Lead than up the hill on Coal. Note that damn close to zero Strava users ride that quaint, but I-25 killed, segment of Silver to Broadway.

Note especially that the jump in users of Lead west of University, where Silver Bike Boulevard riders might switch over at Sycarmore, Cedar or Mulberry, isn’t that large. Roughly 75% of Strava users start and finish on Lead, not using Silver at all. The percentage of those moving from Coal to Silver appears even a bit lower, about 80% sticking with Coal, it appears.

As one who does use Silver BB instead of Lead/Coal east of Mulberry, and a Strava user as well, I’m a bit shocked and overjoyed to see I’m in the minority. It’s so fun to have one’s perceptions and biases corrected by data. In fact, it’s so fun I’m almost embarrassed by how fun it is for me.

But we must instead embrace our nerdiness, dear Better Burque readers! Moreover, we bike nerds know and are frustratingly tormented by the limitations of the Strava numbers. Thus, we simply must do the following:

Who wants to devote an morning or afternoon rush hour or two in coming Fridays plopped down at the intersection of Lead/I-25 and/or Coal/I-25 and take bike counts for ALL who pass? C’mon, it’ll be fun! Perhaps better yet, we could position ourselves at Cedar or Mulberry at Lead and count both Strava and “invisible” cyclists moving to from Silver from Lead and Coal. I do know the shade might be better at one of those appropriately tree-named streets.

I pick Friday only because it’s a weekday that I have “off” work. Any weekday morning or afternoon will do. If interested, drop a comment or email Better Burque’s way. Or just grab a lawn chair and plop yourself down (or park your car in that FBI agent surveillance of Tony Soprano’s house manner) at any of the intersections mentioned above with a clipboard, writing utensil, and simply count cyclists who ride by.

I’m planning to start this Friday, the 22nd, with the afternoon rush hour, horse chores and other complications permitting. As the Summer finally subsides we should have several weeks for delightful, and delightfully nerdy, data collection.