I told my fellow cyclists this morning that I’d like to direct a still photo montage of A.R.T.’s dying construction set to Elton John’s “Candle in the Wind.”

In retrospect, that’s perhaps a bit much, although the roadway-related death of Princess Diana, and the 1950s/60s heyday of both Marilyn Monroe and “Route 66” all seem quite intertwined. Well, if you’re okay with somewhat tangential analogies.

Anyway, here’s a non-musical and cut-and-dried photo recap of a ride this Sunday morning up and down the slowly dying A.R.T. construction along Burque’s Central Avenue.

Only one guy screamed “fuck you” at us the entire trip, which reflects both that it was Sunday morning and that we weren’t obnoxious enough in meandering along the “rumble strip bike lane” that will soon have electric buses amid what will probably still be quite a few bicycle riders. More about that eventuality in future posts.

Meanwhile, we promise to be more obnoxious next time and now invite you to enjoy the snaps below…

One bugaboo for us South Valley residents has been not being able to turn left/south on Sunset. That’s now, complicatedly, possible.

Riding up the hill toward Yucca/Coors with the belching old, pre-electric bus alongside. Note the rumble strip. In other words, this double-wide center lane(s) is the greatest bike lane E-V-E-R…

Yucca Station. No idea how the station signage art was determined. I like this one very much, nevertheless.

West Central will never be the same, post A.R.T.. I wonder if West Central considers that a good or bad thing… 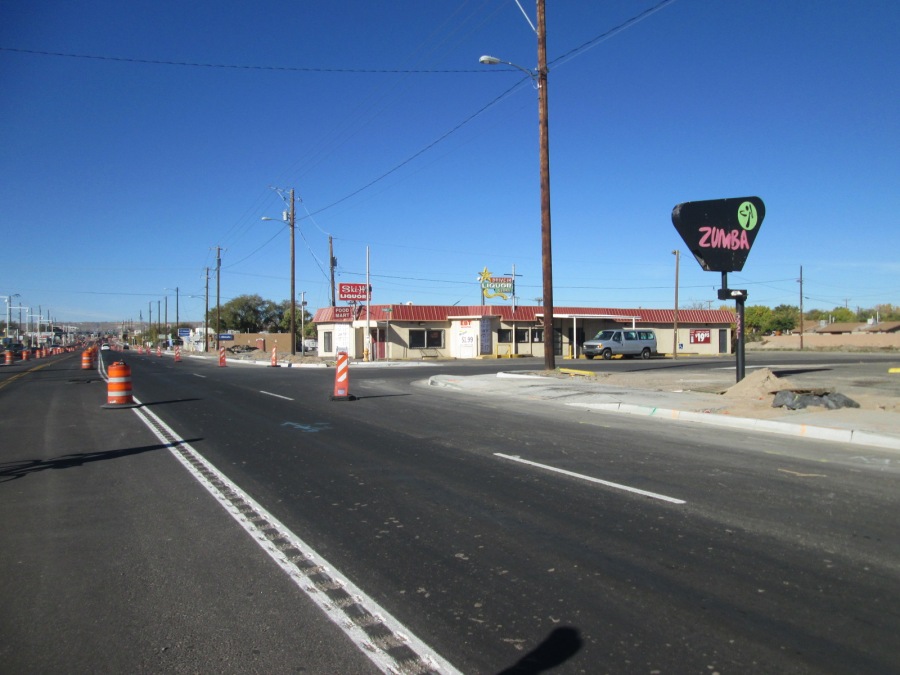 Zumba and Ski-Hi Liquors (including the still-in-place “Drive Through Liquor” sign. To repeat my question, will West Central eventually see A.R.T. as a good or bad thing? 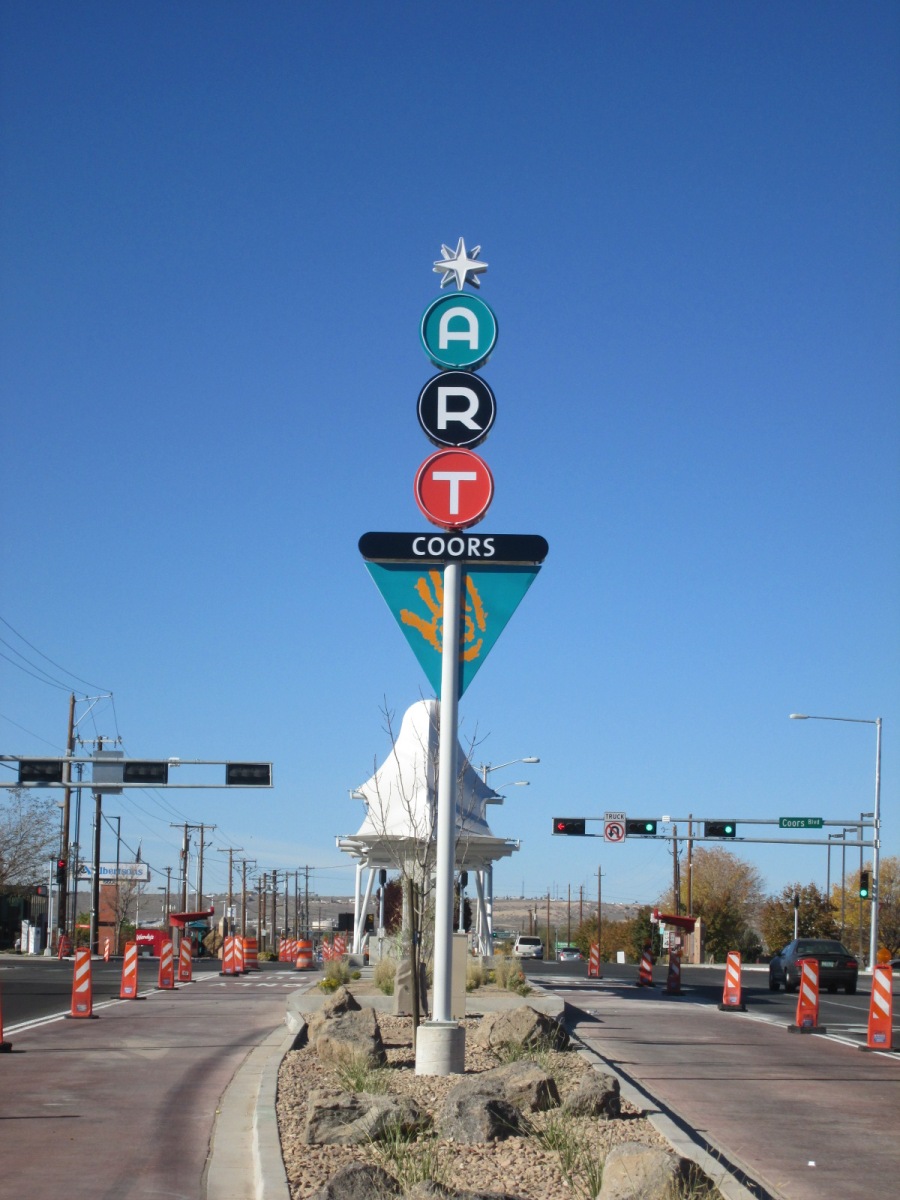 Also again, I have no idea how/why this particular symbol was chosen to represent the Coors Station. I do have an idea how afraid I would be standing as I took this photo at this precise spot if A.R.T. wasn’t being built. Having studied pedestrian deaths at this very spot, it’s positively eerie to idly stand here taking snaps. 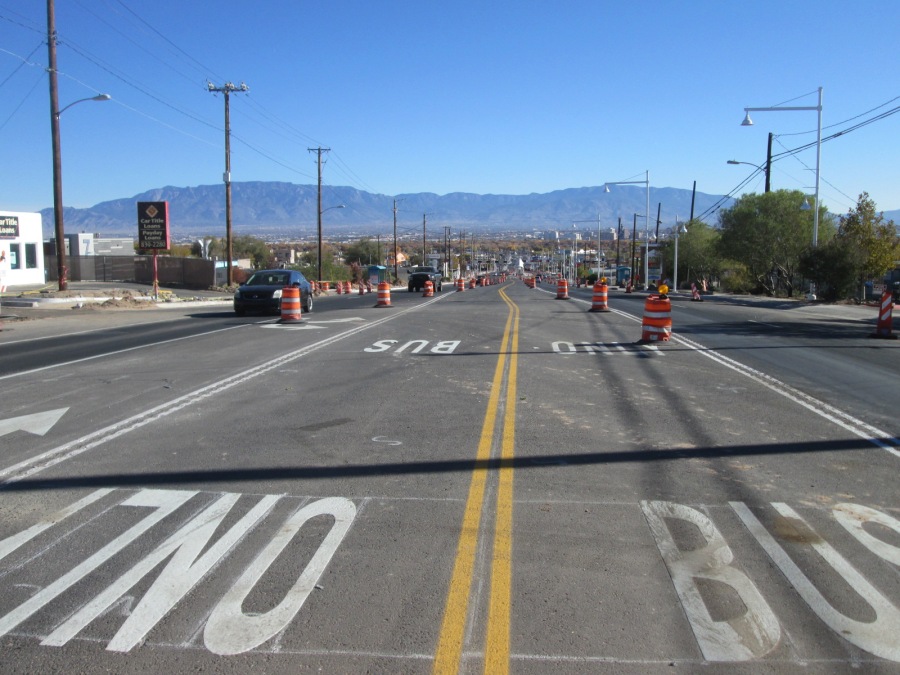 Coming back down the hill. I didn’t take nearly as many photos from this point eastward along the route. Subconsciously, I think that’s because the biggest changes with A.R.T. are those along West Central. Fundamentally transformative, methinks, but time will tell. 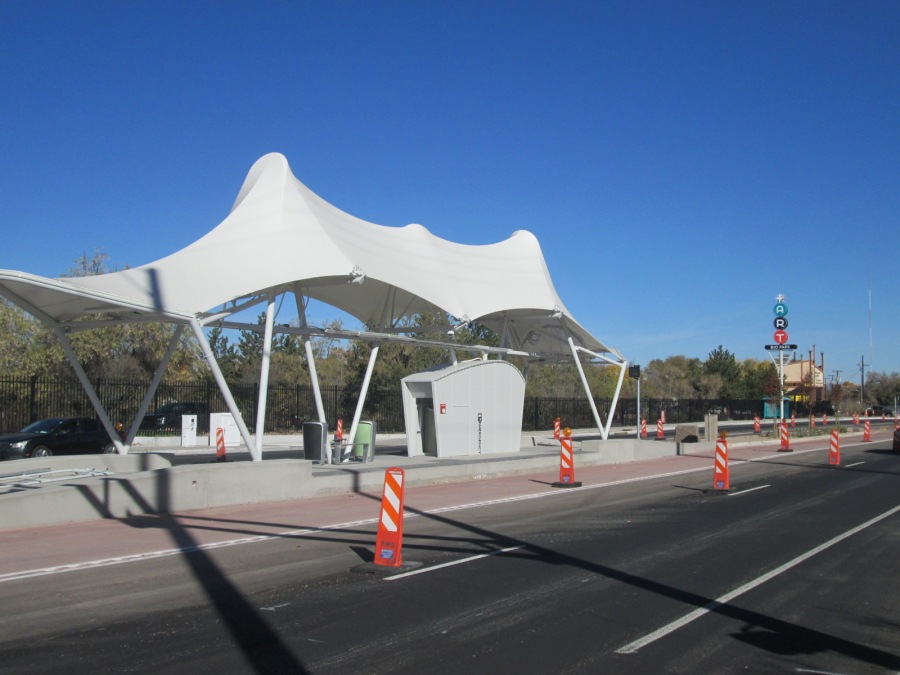 Bio Park Station is perhaps the best conceived of all A.R.T. stops, with thought given to all the chances for Park access. One can imagine this stop with tons of families in the not-too-distant future.

It’s obscure to most, but this is a meaningful notch in the median at Buena Vista and Central at UNM. Note the path leading down from the campus. This is an important north/south cycling thruway, and big thanks to those at ABQ Ride and elsewhere who made sure this notch made it through all the iterations of A.R.T. roadway design.

Looking back west, toward Nob Hill, at Solano Station. Note the wooden boards on the right side of the shot. Yeah, there’s still work to do, and it’s gonna be a while until A.R.T. is truly complete. Nevertheless, it won’t be long until taking a bike ride like ours today up what will be the bus lane(s) is markedly less tranquil.

And yes, in closing, we’re using the word “tranquil” to describe a bicycle ride up Central Avenue. I’m gonna miss you, A.R.T. construction. We’ve had some really, really  great times, including today.

But all good things must end, I guess. Bring on the electric buses.