Do you very much like to ride a bicycle, yet also very much dislike anything called a “meet and greet”? Maybe you like to ride your bicycle solo around Albuquerque, in part, because of the isolation and separation it creates between you and everybody you’d rather not “meet” and “greet.”

I bring up the interrelatedness of social  interaction and cycling only to inform/remind you that Bike ABQ is throwing their 2018 Bicycling Community Meet & Greet tomorrow (Tuesday) from 6pm – 7:30pm at the Anderson-Abruzzo Albuquerque International Balloon Museum. 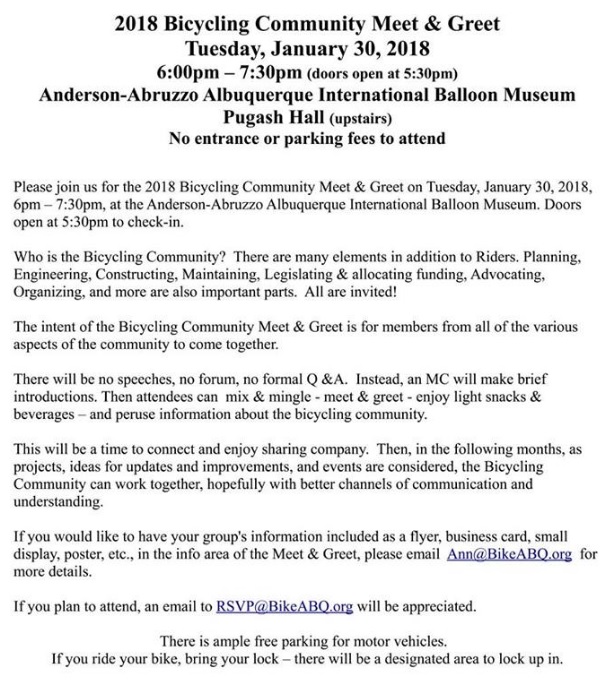 I know for a few of us who love to cycle, seeing the above in print is somewhat like opening that manila envelop and reading a subpoena addressed to you.  Shortness of breath, elevated heart rate…that sort of thing.

You want to support the cycling community, really, but actual interaction with the rest of that community? And at the friggin’ Balloon Fiesta Museum? Why not bring our laundry and chain lube, thus combining several irksome errands into one singularly irksome event?

But it’s okay. Really. We’re gonna be alright, fellow  somewhat less social cyclists. We call all stand far off in the corner of the cavernous Balloom Museum and end up chatting, or not chatting, with each other as we nibble on finger food and share, perhaps somewhat awkwardly, in the silent satisfaction that there are so many cycling lovers in this town.

Before us those socially adept cyclists will be, at least partially filling the cavernous room, talking bikes, bike infrastructure and telling stores about that time they almost got hit by that…

It will be heartening to watch; encouraging to hear; perfectly okay to not directly participate in.

It won’t be that bad. Really. So join me, in a manner of speaking, tomorrow evening at this Bike ABQ event. Besides, it’s an excuse for a bike ride, and that is ALWAYS a good thing.

One thought on “Come, Standing Over Way Off in the Corner, to the Bike ABQ “Meet and Greet””