After having earlier noted that there were zero New Mexico “pedalcyclist” deaths in 2017, it came to my attention a few days back that this was incorrect. Revised, more recent data from the Traffic Research Unit (TRU) at UNM now indicates that there was one death in October of last year.

The circumstances surrounding this revised death total are unknown, and previous personal experience with TRU’s rather extreme secrecy regarding these numbers has me feeling pretty sure contacting them will result in zero additional information. Far from verified, it’s possible this late October crash at 12th and Bellemah might have led to the now-reported death. I don’t know.

TRU always notes its monthly reports as “preliminary,” compiling final, annual reports a sizable length of time later (the most current online is from 2015).  Not insinuating TRU’s work is sinister in any way, the time gap in its annual reports and the number of disclaimers like that below illustrate the inherently legal and socio-political nature of counting up traffic deaths:

NMDOT crash data is protected by Federal mandate Title 23 U.S.C. Section 409 which forbids the discovery and admission into evidence of reports, data, or other information compiled or collected for activities required pursuant to Federal highway safety programs, or for the purpose of developing any highway safety construction improvement project, which may be implemented utilizing federal-aid highway funds, in tort litigation arising from occurrences at the locations addressed in such documents or data.

An example of socio-political fallout via traffic deaths was the “news” last year that Albuquerque is the “most dangerous city for cyclists” after a clickbait site looked at 2015 data and plugged the five cycling deaths that year into a per capita calculation… and voila!

That “story” generated a lot of hullabaloo in the rather skinny silo that is bike advocacy, while also serving as one more thing to file into the endless chasm of web information on “best” and “worst” places to live. One more far less than hilarious dig about a town, with this time Albuquerque serving as the butt of the “joke.”

Where is truth and public policy in these numbers? Not to be callous, but does it ultimately matter whether one person or five is killed riding bikes around here? The newish transportation concept “Vision Zero” has as its aim “no more traffic deaths.” Cities like Denver have embraced Vizion Zero to the extent of having websites devoted to the effort.

While achieving “no more traffic deaths” may seem, and frankly is, pie-in-the-sky dreamy, one very important aspect of the concept is its heightened attention to the numbers and particulars regarding such fatalities. Here’s a look at the Denver website: 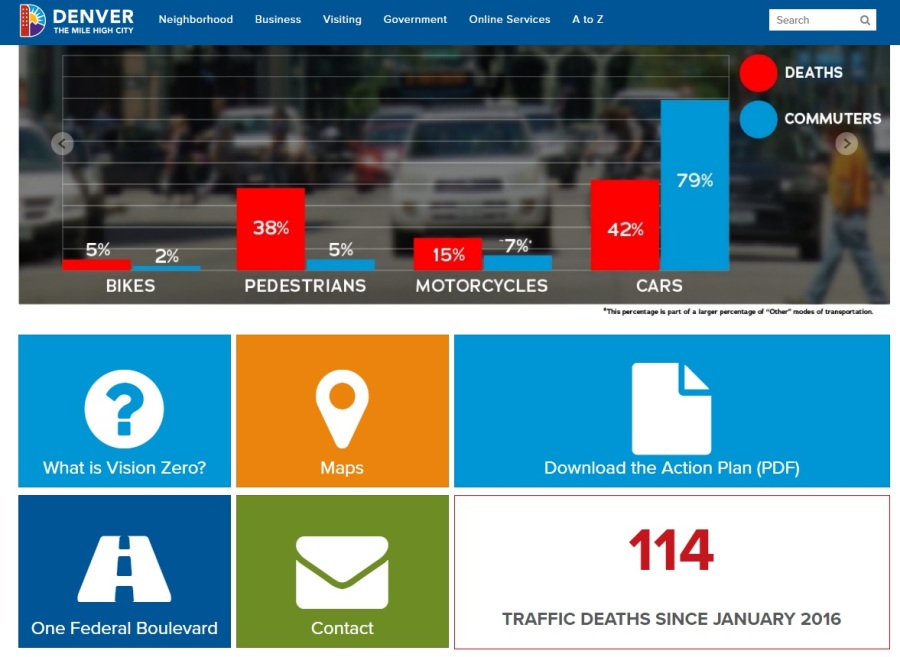 The site not only puts the traffic death number in big, red numerals, it has an animated count up feature that zooms readers up to that tragic figure. Bright graphics outline the death/commuters percentages. The difference between this site and TRU homepage is remarkable:

You might be thinking: “Who cares how a website looks? It’s shallow and avoids the tough questions of how to really address the issues!” Yeah, I can see that point. Nevertheless, while we “in” public policy can always maintain that disdainful disregard for trivialities such as public perception relative to cold, hard facts, how facts are disseminated, and how that lowly public is engaged, is undeniably important in the socio-political efforts that become public policy.

Back over a century ago, Upton Sinclair wrote a novel about slaughterhouses and the mistreatment of immigrants working in them. While the changes Sinclair sought via prose didn’t exactly follow his wishes, major regulatory changes happened due to the book.

Today, I’d love to think a novel about traffic death would be capable of achieving .001% of the changes wrought by The Jungle. But that’s laughable. Outside of a movie franchise about a superhero devoting her/his life to overcoming speeding and bad roadway infrastructure, bringing more attention and information about traffic deaths to the public via means with which people actually interact is the way to go.

And that way to go has to be more than just clickbait websites and secretive, largely hidden releases of information. As with all problems, first we have to admit we have one. In terms of traffic fatalities, most of us very much seem to still be working on that first step.