Earlier today we mentioned tonight’s City Council meeting would include discussion/vote on changes in how urban planner Jeff Speck’s “Downtown Walkability Analysis” for Burque would be implemented by the City and Council.

That resolution, sponsored by Councilor Isaac Benton just passed unanimously. Prior to the final vote, a new amendment was introduced on the Council floor and voted upon, an amendment not spotted by me in the agenda earlier today. Maybe it was there earlier; maybe it wasn’t. No matter. Far more important, and definitely worth a close read, is that amendment’s insight into the thought process going on between City Council, CABQ Department of Municipal Development (DMD), and the Mayor’s Office concerning implementation of the ideas Speck espoused in his Analysis.

The amendment positions 30 Speck recommendations into two broad categories: “Section 1: Projects for prioritization in the next CIP (Capital Improvement Program), with other available funds, or as maintenance provides opportunity” and “Section 2: Projects that are supported in concept, but that require further design, interjurisdictional coordination, and/or funding.”

18 of the 30 ideas are “projects for prioritization,” including general restriping/driving lane narrowing to 1st-8th Streets inclusive, with specific treatments for each street depending on a number of factors. To give a flavor, here’s a screenshot: 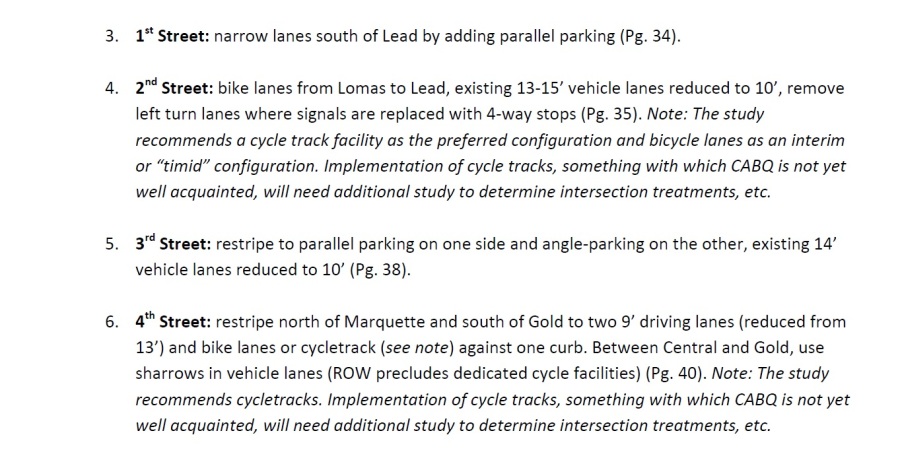 The eye of the more cynical cyclists among us will instantly go to the italicized statement (appearing twice) concerning cycle tracks, and the inclusion of this language points to the definite need for more conversation, advocacy, and “additional study” on the topic. Remembering this is all a process is something worth remembering.

Here’s another screenshot of projects seen as CIP priority items:

See, it’s all a process.

And, yes, that process includes the fact that there currently aren’t parking-protected bike lanes on Lead/Coal, but tonight’s passage of Benton’s resolution would seem to firm up Speck’s recommendations as City policy. Perhaps even more importantly, as the amendment excerpted above indicates, it would also appear significant discussion and progress has occurred between Council, DMD, and Administration on implementing these specific recommendations.

If appearances are correct, we’re possibly entering a period of public policy alignment regarding roadway infrastructure that is both hugely promising, and totally outside the norm. Councilor Benton mentioned “being on the same page” tonight in his remarks before passage. If that “same page” can be maintained for, say, two Mayoral Administrations, amazing progress might be possible. Yes, cycle tracks included.