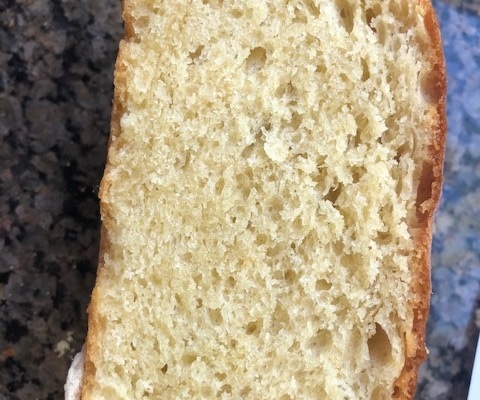 In the case of my most recent brioche disaster (I’m going to keep baking that damn thing until it I get it right or I weigh 300 lbs), I simply forgot to turn the page. I am not kidding. I didn’t turn the page of the book I was using.

As a child, my mother carted me off to flute and guitar lessons. I learned the basics at both and kept at the guitar long enough to know that to play most Joni Mitchell songs you had to retune the strings to a different key. I learned some decent finger-picking techniques and didn’t embarrass myself among my fellow summer camp counselors when we all sat around playing the more complicated James Taylor or Simon and Garfunkle tunes (I’m dating myself, I know). I learned to play Landslide, a particular accomplishment, and I can play a mean Stairway to Heaven to this day.

What stymied my musical career was either a lack of natural talent or a lack of stick-to-it-tive-ness. I was so jealous of those other teenage guitarists who could do more than just follow along. They could add something—a riff, a harmony, a little soul. Whatever it was, I didn’t have it, and I also, it should be noted, didn’t try that often. Eventually I felt bored with C-D-G-A-F and a few flats and sharps and bar chords. If I’d stuck with it, would I have overcome those limits and been able to launch into an impressive series of freestyle finger-flying guitar work? Who knows?

In baking, maybe I can freestyle. Or I’m starting to, anyway. And that gets me back to that latest cursed brioche.

Although I’m still carefully reading steps and recipe notes before I embark on a baking project, sometimes I’m a little lazy. Sometimes a little careless (not surprisingly, this was a common complaint of my music teachers). Sometimes I don’t pay attention to the details. Sometimes I get distracted by training my puppy or an email or some bill I just remembered I needed to pay. I’m not as focused as I could be. I take my dough’s temperature, think about water temperature and dough consistency, and try to make notes in recipes, but sometimes I forget.

In this latest disaster, I started out making regular old brioche, but then changed my mind (because I rarely repeat recipes) and decided to make “brioche au lardon” which sounds like a bit of gourmandise heaven: Brioche: Flour, water, salt, levain, butter, eggs. Au Lardon: with bacon.

Yes, friends. Bacon. Because nothing accents the flavor profile of butter like bacon. Or the fat content.

That was the plan, anyway. But this particular book refers to previous pages for instructions (can I just say, I hate that about this book?). Then I remembered that the recipe with the bacon was actually on the next page. I added honey and olive oil. I carried on. It was only when I got this GIANT MASSIVE wet, batter-y mix in the Kitchen Aid (there was no way I could mix this monster by hand), I realized that I had doubled the fat (page 1, butter. Page 2, olive oil) and the sugar (sugar, page 1. Honey, page 2).

Needless to say (or kneadless, for you punsters), there was no way that dough came together. I mixed and mixed. I stuck both hands in there, tried to fold and stretch and knead. Turned the mixer all the way up. That dough was never going to become anything more than cake batter.

In frustration, I covered the bowl and stuck it in the fridge overnight. “I’ll deal with this in the morning.”

I laid in bed thinking about that dough (as, now that I am mostly pandemically unemployed, this is a thing I do—lie in bed in the morning and think). Should I just trash it? There were so many ingredients in there—so many eggs and so much flour and olive oil. Not to mention so much butter. “I can’t just trash it,” I finally decided.

And with that decision came an epiphany: “If it’s like a cake batter, why not bake it like a cake?”

Overnight, that monster rose like crazy (tribble is active!) and even overflowed the 5-quart bowl a bit. I hauled it out of the fridge and buttered and floured a bundt pan and every loaf pan I own (it was a monster, I’m telling you). And then I baked them all.

(Editor’s Note: We forgot to take a photo of the overflowing 5-quart mixing bowl. A truly massive amount of product.)

They rose, they turned a nice golden brown. They were, as you might imagine, cake-breads: Slightly sweet, slightly olive-oil-tasting, tight crumb, great with strawberry jam (made for a failed donut filling, another story) and butter.

The joy of these Brioche-cake-breads was that I freestyled! I riffed! I used my knowledge and a bit of baking derring-do to turn a disaster into a happy accident. This is, perhaps, the essence of creativity: when you start making the big leap from just following the recipe to inventing it.

It’s the leap I always wanted to make in playing the guitar, yet it sounds/tastes just as sweet via baking decades later.