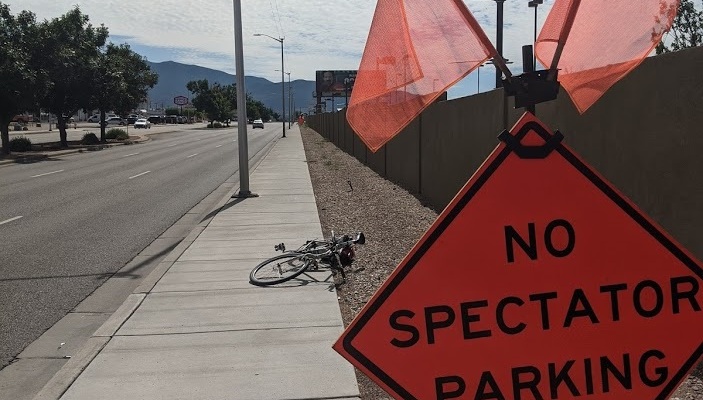 We knew they were freshly placed because along the way we had the chance to chat with the crew placing them, cheerfully informing them that placing signs directly on the sidewalk, especially with adjacent spaces available (as seen above), should never happen. Ever. The nice folks on the crew helped move one sign to such an adjacent space. We helped out with a bunch of others that must have been placed before our cheerful conversation with the crew.

Post-ride research revealed why the signs had been placed: Expo NM was one of several area fireworks sites last night and evidently concerns were that drivers would go “Balloon Fiesta on I-25” and park all around the fairgrounds. BBTUT is unsure if drivers would/did obey these signs (e.g., the ongoing El Vado saga) but is absolutely sure that the original placement of the signs did an unintentionally great job of preventing those in wheelchairs from rolling down the long sidewalks to the many shops and businesses nearby.

This surely was unintentional, and to help avoid such unintended consequences in any and all future placement of what the Federal Highway Administration (FHWA) terms “Temporary Traffic Control Zones,” below is a handy-dandy FHWA checklist, produced by the American Traffic Safety Services Association (ATSSA), that BB readers can whip out when cheerfully chatting with crews about non-compliant sign placement and that would make lovely slide visuals during any and all training PowerPoints for sign placement crews, contractors, and any government employees involved in designing “Temporary Traffic Control Zones.”

Abundant evidence, including the sidewalks around Expo NM yesterday, would indicate that the tableau outlined above (i.e., with the little pencils) doesn’t actually often take place. In fact, all apparent evidence of projects involving placement of temporary signs seems to hint that such meetings never take place. Ever.

BBTUT cheerfully offers the handy-dandy checklist above and also volunteers to laminate little versions of it that can be placed on the wrists like those play-calling cheat sheets used by football quarterbacks. That way, in addition to use during meetings with little pencils and in training PowerPoints, on-the-ground decisions on sign placement can include a quick look at the wrist. From there, sign-placement crews can “make the right call” and help score a “touchdown” of pedestrian access consideration leading to a “victory” of overall project compliance.

Yes, it was extremely hard to write the previous paragraph…

During yesterday’s ride your humble blogger was accused by another BBTUT member of being an “optimist.” I must admit my guilt to this outlandish charge. Despite the veritable Mount Everest of non-compliant sign placement evidence, I really do think we can do this right. I really do think everybody involved can use the handy-dandy checklist and stop putting these signs smack-dab in the middle of the goddamn sidewalk.

Until then, BBTUT will just keep moving the signs. Optimistically and cheerfully.