This is a big deal. Traffic and other aspects of MLK make it a favorite East/West route to/from downtown and UNM for many cyclists, particularly commuters. The project will also go where Burque has never boldly gone before: Green Paint!

Here’s what the changes mean for the historically problematic combo-intersection of MLK (Marquette)/Broadway/Tijeras: 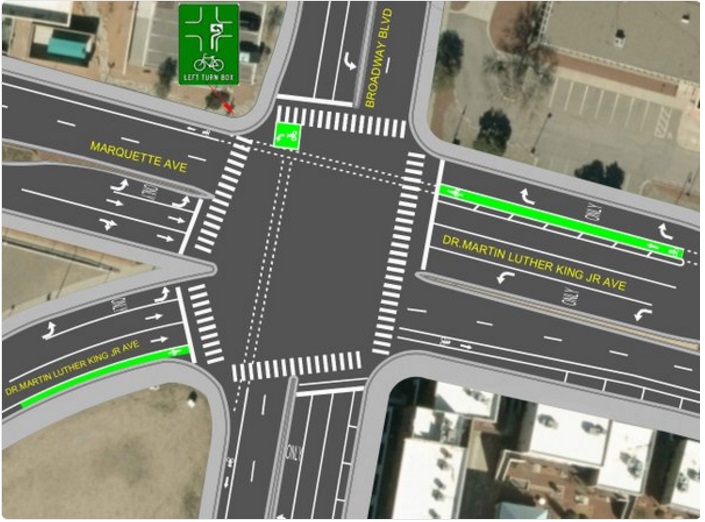 In addition to paint color, the intersection will also feature ABQ’s first two-stage bike box, a form of what is often called a “Copenhagen Left.” See the little green box southbound on Broadway? Cyclists wishing to travail the always interesting westbound MLK left onto southbound Broadway will have the option to first stay right on MLK and stop in the little green box, then proceed southbound.

The two new wrinkles also require an important education component, for motorists and cyclists. What does green paint mean? What’s with the little green box? CABQ has put out a handy-dandy tri-fold with details on these and other changes coming. These also include bike loop detectors to help at signalized intersections along the route.

The education effort will, obviously, need to be more than online tri-folds, and the cycling community will need to play a part in that effort. Silly ideas, such as having cyclists in “Lucha Libre” wrestling masks passing out tri-folds to folks at the intersection, have been suggested (perhaps by this humble blogposter), but perhaps the best way cyclists could inform others around them would be to demonstrate use of these improvements in their trips in the area.

While the tendency for experienced westbound MLK cyclists/commuters may well continue to be moving into the traffic lane to make the left-hand turn southbound to Broadway, visual demonstrations of the Copenhagen Left in action would do a lot to help. Maybe CABQ could offer cyclists a $1 “reward” for those submitting selfies standing in the little green box. Remember, no Photoshopping. That would be crass.

Regardless of the education methods employed, exciting changes such as those on MLK and the first ABQ hawk signal at Alvarado and Lomas point both to the enhanced cycling experience here and the need to “hip” Burqueans to the improvements. Any fruitful ideas that smooth the transition can only help make further such innovations more likely.