BB cannot recall who and how many days back it started hearing from Nob Hill residents making their customary trip north on Carlisle toward the Co-op, or Central Avenue, or…Canada, I suppose, when suddenly struck somewhat dumb by the following as they topped the hill at Lead/Coal and started the steep grade down: 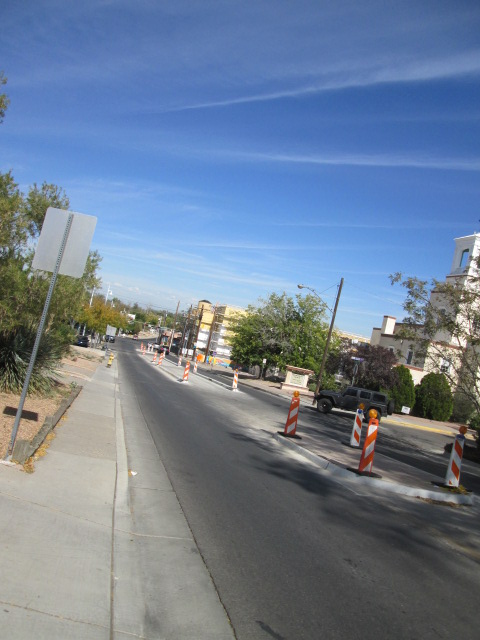 The photo doesn’t do the situation justice for: 1. I’m a terrible photographer; 2. I wasn’t willing to stand in the middle of the street to get that Cartier-Bresson instance of genius snap, milliseconds before being struck and killed by some confused motorist muttering “What the Hell is this construction?” as they plowed into yours truly.

To take a verbal crack at the situation atop the bad photo, this is construction related to Silver Bike Boulevard improvements. The idea, as illustrated below is to make what was previously the middle/turning lane into a two-way cycle track. The little median “island” in the foreground is a bit of protection for cyclists as they enter/leave the cycle track to/from Silver on the right in front of the church. Here’s the plan:

Once you get accustomed to the blizzard of numbers in white circles in the illustration above, the upshot is the cycle track in green, some curbs alongside in blue, and a little gap in the cycle track to allow motorists to enter/exit the Nob Hill Shopping Center parking lot just below the white circle with the number 19.

Personally, I was kinda in favor of the “get the Hell off of Carlisle” plan, one that called for a very short multi-use path (glorified sidewalk) on the east side of Carlisle, the idea being cyclists cross Carlisle in a straight shot, take that path, and avoid the Carlisle mess mix of steep uphill/downhill, exits from the aforementioned parking lot, a bus stop just across Carlisle at Silver that tends to lead to significant backups in an already confusing mishmash…you get the picture.

But that plan was shot down and the median cycle track “won.” No hard feelings and, eventually, this solution will make something fairly close to the best of what everyone admits is a bad, bad traffic situation.

Speaking of bad, what’s temporarily rather horrific is that only the cycle tracks curbs and medians have, so far, been installed. Let’s look at the situation again from “below” on Silver looking “up” at the cycle track:

I like this shot, despite it being of far below Cartier-Bresson quality, for it shows someone exiting the Shopping Center parking lot (in a Prius, naturally), crossing the cycle track. Have I mentioned the glorified sidewalk plan that didn’t make the cut?

Anyway, the temporary problem atop what will be the longer-term shortcomings of the cycle track idea is that their is zero signage/traffic cone guidance instructing drivers (and cyclists) what the Hell they are supposed to do with what used to be the middle turning lane.

This is my favorite, for despite its far less than Cartier-Bresson quality, you can just make out a line of cars waiting behind a stopped bus (because that’s where the bus stop is), a line of cars that curves back to someone in a white car (a Prius, naturally) exiting the Shopping Center parking lot and deciding to sit motionless in what will eventually be the cycle track.

Okay, enough. Time to take one’s metaphorical foot off the gas of snark about this work-in-progress and present a solution or two, both temporary and longer term. First, the temporary:

The 27 eight-by-ten glossy photos, nowhere near Cartier-Bresson level, and roughly 900 words of text above commit a bike advocacy “sin” that needs to be acknowledged and put into context. Namely, this essay criticizes a small, yet important, part of a project that is, overall, a dramatic improvement from the previous iteration of the Silver Bike Boulevard.

It’s important to not forget that as we now press for tweaks and evolution from final plans to actual implementation. During my latest ride out to Carlisle and Silver, I noticed that some of the initially installed cycle track curb has already been taken away. A new gap has been created. This illustrates that this vital intersection is very much still a work-in-progress. Changes can and are happening.

And more changes, including a significant bump in user education, need to happen. Now.

One thought on “Burque Fall ’16 Transport Photo Series #2: An Inadequate Answer to the Question “What the Hell is Happening at Carlisle/Silver?””