Not Ciudad Juarez blocked at the border into El Paso, but ABQ’s Dan Avenue S.E. abruptly ending, now, at I-25

Border walls are all the nativist rage these days, urged on by enraged people convinced that, if we can just Balkanize and segregate enough, “we” can block “them” all out, leaving only “us.” Because “we’re” fine and the problems all come from “them.” Nevermind, for instance, that “we” have all the disposable income and demand to buy the drugs that “they” transport, or that “they” are inextricably  woven into “our” economy.

This border wall building frenzy isn’t a new concept, however. Nor is it limited to the idea of simply building walls between nation-states. De facto edifices, designed and constructed with the same nativist rage, and desire for segregation, currently belching through today’s national politics, are already in place all over the country, often more euphemistically called “The Interstate Highway System.”

Perhaps the most famous case of using highways to entrench segregation was the work of Mayor Richard J. Daley in Chicago. As thoroughly told in their biography of the “American Pharoah,” Adam Cohen and Elizabeth Taylor relate how Daley oversaw precise placement of interstate highway construction, such as the Dan Ryan Expressway, to block people of color from living next to his fellow Whites via millions of tons of concrete and limitless zooming cars.

Oh sure, that happened in Chicago and other “racist” places, but surely not in the multicultural nirvana that is Albuquerque. Right? Views such as that depicted atop this blogpost illustrate that placement of I-25 through Albuquerque southeast of downtown just happened to take place through established neighborhoods of working class people of color, including the biggest enclave of the small number of African American living here.

I’ve looked pretty hard and still haven’t run across a book describing the racial history of Albuquerque in this regard, or any regard, now that I think about it. If you know of one, PLEASE direct me to it. For all I know, Albuquerque stories such as the:

haven’t been compiled into a book.

To elucidate a bit on one of the above stories, perhaps you’ve had an experience similar to my own in buying a house on Cardenas just north of Central back in 1998. At closing, amid all the paperwork, I’m handed a deed or title or something (I’m not good with real estate terms) that has about twenty numbered sections, including two or three that are redacted, i.e., simply marked out with a big black Marks-a-Lot.

Being nosy, I ask the closing agent and there ensues an extremely awkward explanation that, originally in the 1950s, the “new” part of town east of UNM between Central and Lomas, and such, all had housing covenants with clauses like (and I’m paraphrasing here) “House will not be sold to Blacks, Mexicans or Jews.”

Honestly, I could have the designated forbidden groups slightly wrong, but, also honestly, the redacted covenants were every bit as bad as the paraphrasing above.

Yeah, this “was” in Albuquerque.

Problem is, it’s a hell of a lot easier to redact a racist housing covenant with a Marks-a-Lot than it is to move an interstate highway. So the wall at the abrupt end of once thriving San Jose neighborhood streets like Kathryn Avenue still look like this:

Note the names: Dan “Avenue.” Kathryn  “Avenue.” Avenues are through streets, right? Moving a few blocks north in historic perspective, let’s stare at two photos of the area, one from about 100 years ago (1918) and what it looks like today (Google). In particular, notice what happened to Garfield, Lewis, Bell and Manuel Avenues: 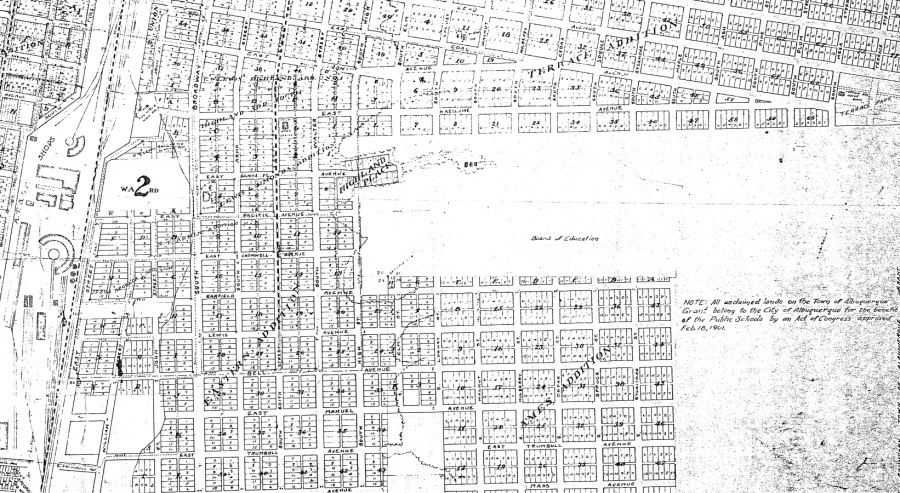 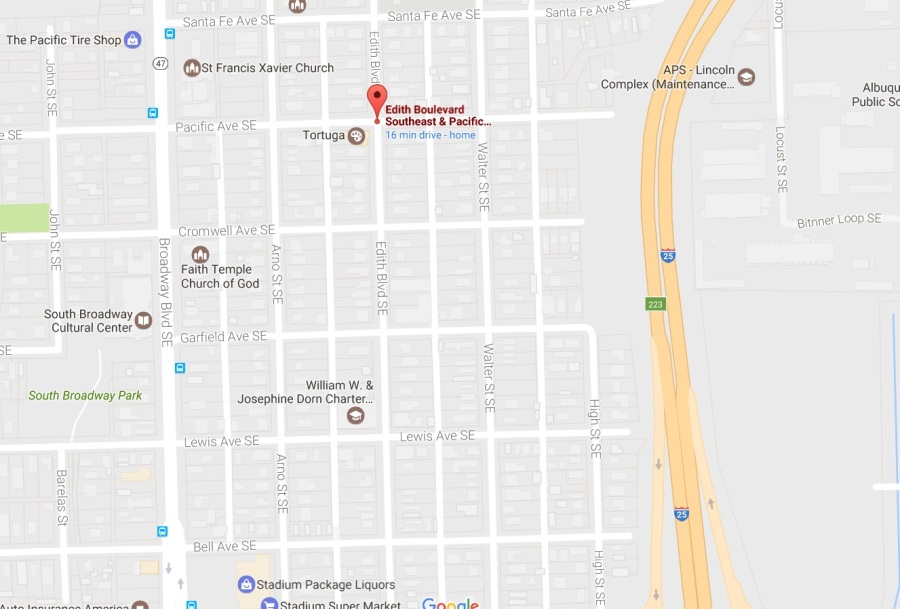 What is the 1918 eastern “Ames Addition” of these streets has simply vanished. The area just north was developed by Albuquerque Public Schools to become things like Milne Stadium. The area east of what is now the South Broadway Cultural Center was just… amputated, only now filling in with entities like a Motel 6, Lobo Village and a brand-new medical facility.

Albuquerque interstate placement was worked out in the 1950s, and completed in the 1960s, the same era in which Mayor Daley wove much of his segregationist machinations in Chicago. If you find that really good book on exactly how placement decisions were made here, I’d love to read it.

So that’s the I-25 wall reality here in 2017. Poor neighborhoods like San Jose largely choked from connection with other parts of town, isolated via a highway to the east and train tracks to the west. That’s the current reality.

But must it always be that? Can the wall that is I-25 be modified, if not torn down, in a way that rekindles neighborhood connection in some way beyond joining the thousands of cars zooming through on Avenida Cesar Chavez and Gibson to Broadway further south?

In my next post, we’ll take a look at the I-25 South Corridor Study (note: updated now to 2016 link) and how future work to “fix the curve” and other shortcomings currently found in interchanges such as I-25/Avenida Cesar Chavez might include pedestrian and other non-motorized improvements to, finally, reconnect these long-separated neighborhoods and release this part of town from the de facto mobility prison within which it has existed for decades.