A long-time Albuquerque complaint made by myself and other non-motorized roadway users is that each and every quadrant in town has at least one bike/ped bridge over the Interstate, except the stretch of I-25 south of the Big-I.

But there was a time…

For years, I’ve had a personal fascination with Burque’s Lincoln Junior High, built in 1923 and closed in the early 1970s in a controversial swirl of race, busing, dilapidated conditions, pointed arguments over who let the conditions become so dilapidated, and de facto segregation. With an overwhelmingly black and brown student body from neighboring East Barelas, Martineztown/Santa Barbara, and east to Buena Vista SE north/south down to Kirtland Addition, Lincoln was a place of internal pride and external discrimination for decades.

Along with fascinating stories I’ve read, offline, over the years involving public protest by students and families at “White” Jefferson Junior High (now Jefferson Middle School) when former Lincoln students began matriculating there (protests which included lining up around Jefferson to threaten/block these students), I’ve also been interested in the story and outcome of Lincoln from a transportation angle. 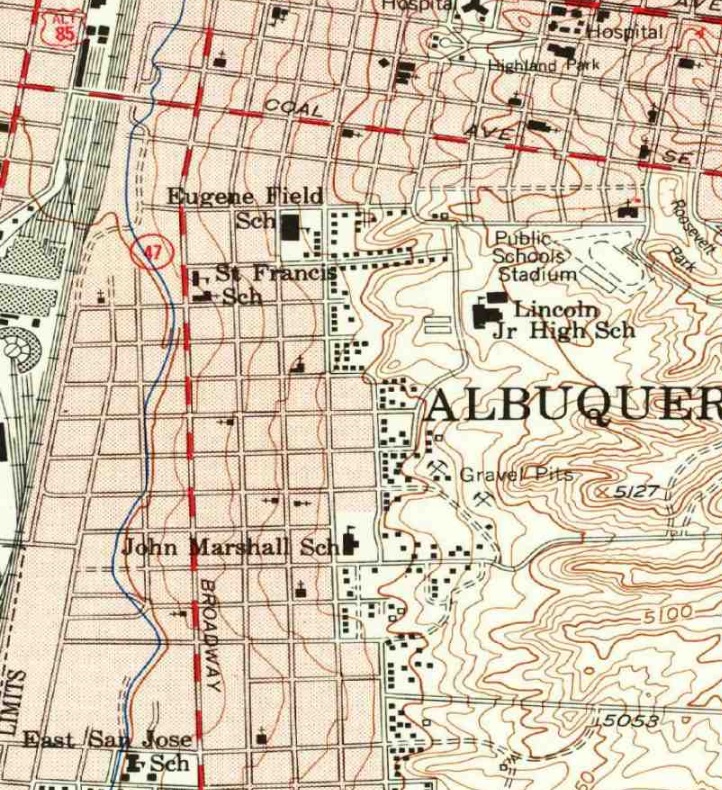 And here’s pretty much the same excerpt from the 1960 map:

Yeah that “Under Constr.” thing is I-25. Most kids who attended East Barelas (aka South Broadway/East San Jose) schools (Eugene Field, John Marshall, and East San Jose) walked/rode bikes to Lincoln Jr. High up to 1960 because:

What was in the way was a pretty steep, sandy walk/ride route up part of the way from the Valley to “the Heights.” Here’s a description of that experience from a Albuquerque Tribune story of April, 1970: 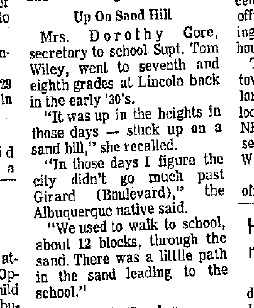 We’ve written a few BB pieces over the years about the “Border Wall” outcome of I-25 bifurcating neighborhoods and killing non-motorized connection for miles south from Lomas Blvd. Keeping Lincoln Junior High in mind, here is a 1959 aerial look just prior to construction:

Which finally gets me to the mystery. In the course of newspaper research, I came across this singular reference in one of the many Journal/Tribune stories written during the 1970 closure brouhaha:

Maybe you noticed a little something in that 1961 during I-25 construction aerial above. Let’s look at it again.

And let’s blow that up a bit:

I think it’s a “catwalk,” perhaps temporary at this time, running from the sand at the end of Pacific Ave. (one block south of Santa Fe Ave.) up and across the leveled to-be-I-25 over to Lincoln. Let’s look at the wider photo one more time:

I don’t know when this or any following semi-permanent “catwalk” was removed. And no, I’m not 100% sure that’s the catwalk. Long, long story, but maps and aerial photos have a strange gap between about 1960 and 1990, at least via my online sources (linked above). USGS maps during this gap use the 1960 map, putting anything new (roads, subdivisions, etc.) in reddish-purple through a series of updates extending to 1985. Available aerial maps through the handy-dandy CABQ Historical Aerial Viewer cut off in 1961 until 1996.

Hence the only map verification that such a catwalk existed is an extremely faint line segment with end flares (I’m sure that’s not the name for such things) crossing I-25 in  later updates of the 1960 USGS (here 1974):

That’s it. That’s the “proof” there was once a bike/ped bridge, of sorts, in the Interstate quadrant of I-25 south of the Big-I.

Integral to my “Catwalk Mystery” has been a lack of complete data. Which, to be honest, makes such mysteries more fun. It would also be GREAT fun to hear from anyone still around who walked that catwalk to/from Lincoln Junior High and/or remembers it hanging, precariously in my imagining, above and across the roaring Interstate. My guess is there are plenty of folks who remember.

If you’re one of them, drop me a line in some manner circa-2020. Much appreciated.