Having finally escaped Lisbon’s velvety clutches, the tour began in earnest about 30 km outside the city in Sintra. The Saturday holiday crowd was in full force in this popular daytrip town, with its castles and palaces.

I was only interested in getting out of town, and with the help of a non-English speaker was shown the highway N247 door north to Peniche. I’d decided this first day would be making a getaway as straight and far away from Lisbon as possible, and N247 is your man for such an enterprise.

The only unfortunate aspect of that is N247 serves as the same south-north getaway to every car & truck in southwest Portugal. Hence the day was one filled with objects filling my nerdy helmet mirror. Almost all drivers were courteous, and it only got hairy once or twice.

There were also hills, but, as they are so ubiquitous in Portugal, I will stop referring to them in this journal. Instead, if absolutely necessary, I’ll note them as GDMFs (an acronym of expletives I think the average low-brow Better Burque reader can easily unravel). To practice the usage, I was forced to walk the bike up three GDMFs today, but most were successfully assailed.

The main culprit was the headwind, and I might have to make another expletive acronym for this, as I’ve learned the wind usually blows from the North, which is (to be spoken like Peter Cook as the miner in “Beyond the Fringe”) precisely the direction in which I plan to ride.

The last 15 km into Peniche were wonderfully devoid of both GDMFs and wind (largely), and I zoomed down to the coastal town famed for its surfing. Speaking of coast and surf, photos below show were I first caught sight of the Atlantic, and a point or two where the narrow highway and cars allowed taking a snap near water. Honestly, I didn’t take as many wandering views as I could, as today was all about “getting there.

Such goal-oriented silliness will stop immediately, i.e., more photos and less complaining about vehicles to follow.

About 100 km later, including a harried trip through parts of Lisbon to the Rossio Train Station, and I’m here in Peniche listening to gulls as the daily evening clouds roll in ala San Francisco. The tour has started. 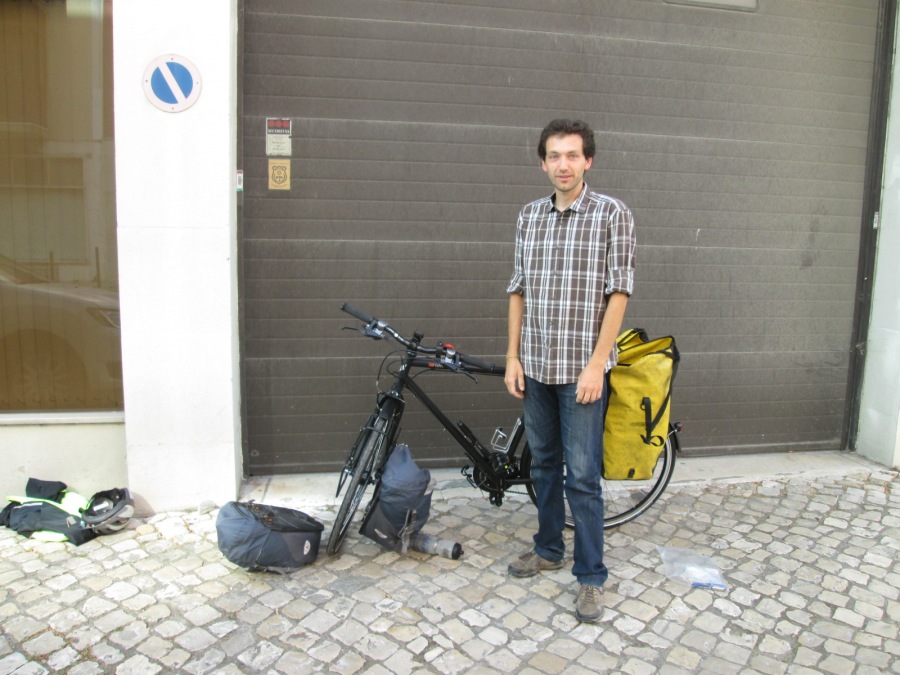 A frenzied morning in Lisbon kicks off with last-minute adjustments by intrepid bike shop owner Bruno. I wrote a bit about Bruno in my last post. One of these days Portugal will have a thriving bike touring culture, and it will have Bruno to thank for having put up with all the birthing pains in getting such a culture started.

Paintings and floor tiles along the walls of Rossio Station, Lisbon

The new bike, still unnamed, and I start the tour at the Sintra train station. Being Portugal, this important point in personal history is, of course, captured in front of a Chinese restaurant. 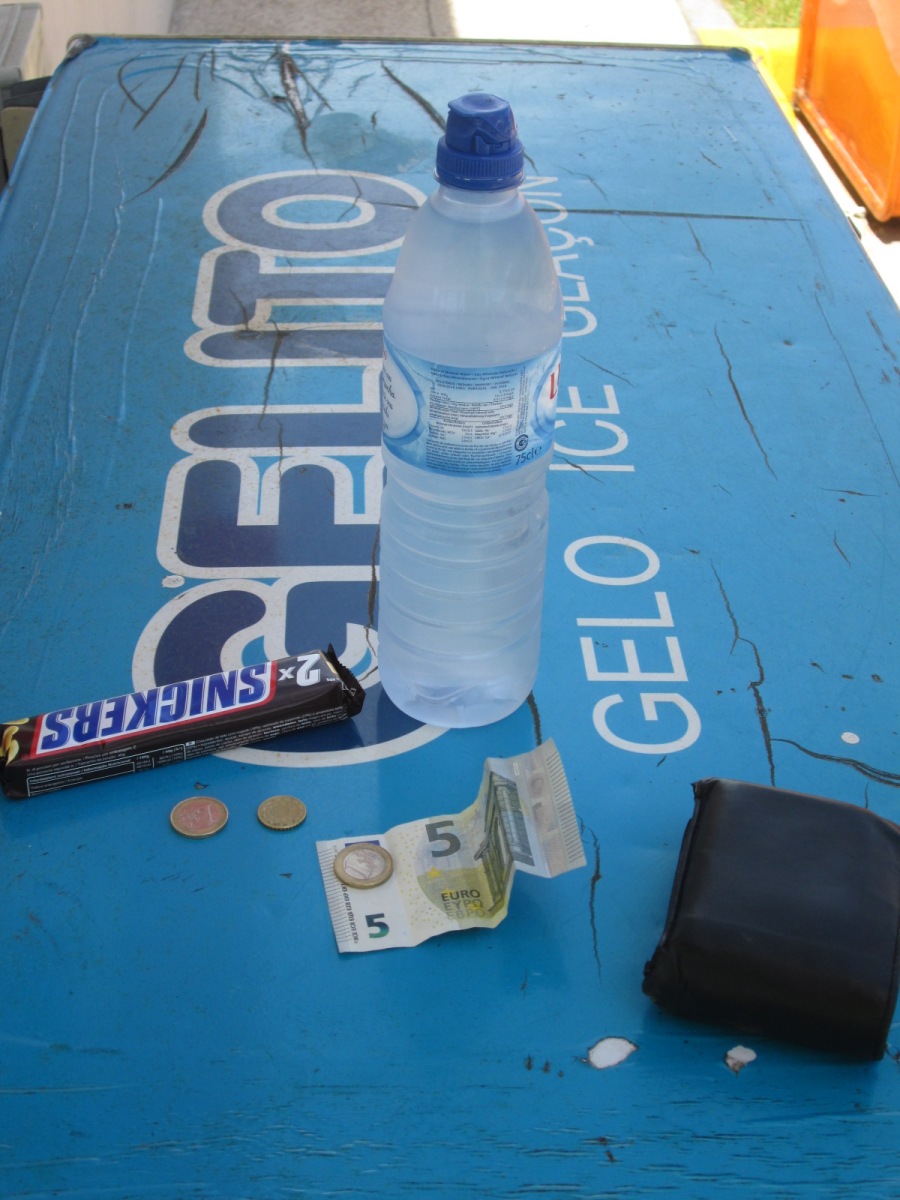 And the ceremonial first junk food purchase of the new tour, purchased in one of countless suburban-esque villages outside of Sintra. 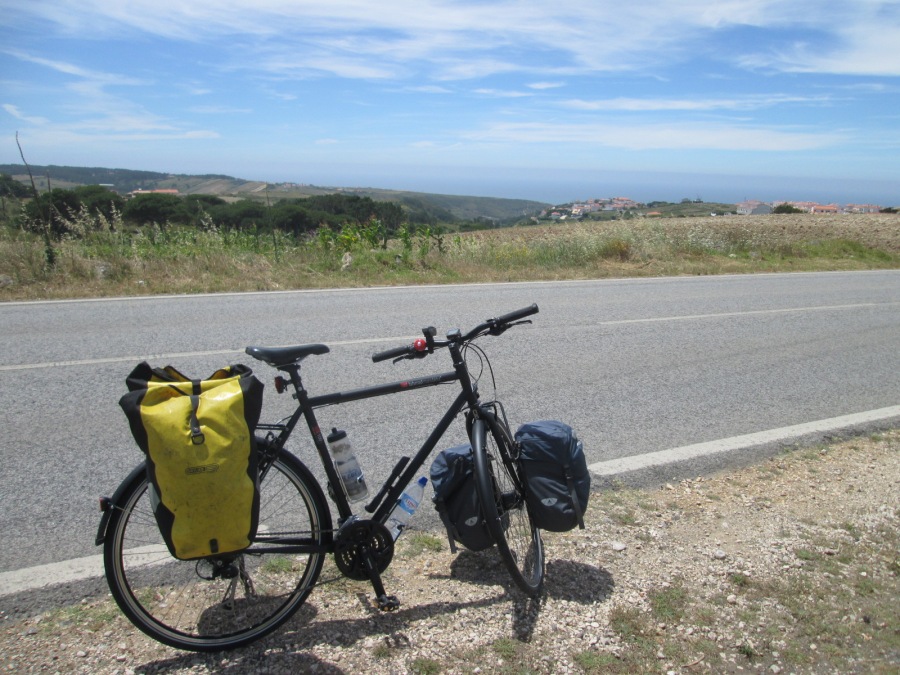 You can’t really see it, but there’s an ocean out there. My first sighting.

A slightly more visually attractive and informative look at said ocean near Santa Cruz (the Portuguese one).

As I’d chosen to tackle a big chunk today, I didn’t see a road sign indicating “Peniche” until this one about 65 km into my day.  I can already tell such signage will play a very important role in my Portugal sojourn, as the overall bike signage is largely nonexistent.

The steepest section of the steepest GDMF I walked up today, inadequately captured, of course, because as Hitchcock once said: “2-D sucks.” Okay, he probably never said that.

Fortunately, several communities along the ocean have a separated bike “cycletrack.” They usually have lots of sand on them, but hey, they are right next to the beach/ocean. 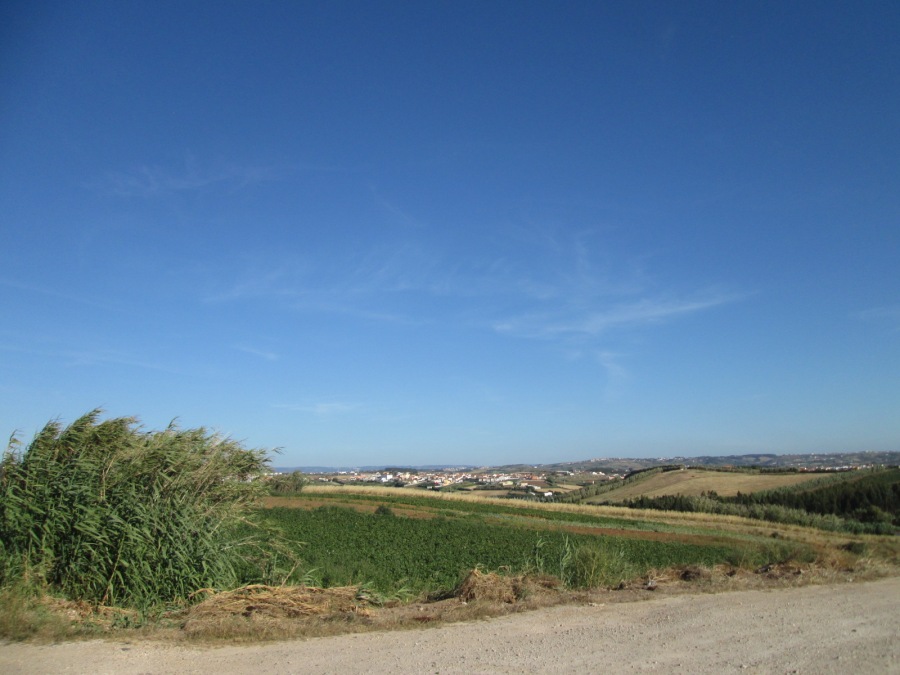 Mainly a lot of views like the two photos above today, looking inland. You could do worse, really.

One thought on “Bike Tour, Day One: Sintra to Peniche”