After having spent an extra 48 hours or so in Lisbon, and there are far worse places to spend an extra 48 hours, the bike tour is scheduled to finally, formally, officially and ceremoniously begin tomorrow morning at a small bike shop along the river in the Braço de Prata section of Eastern Lisbon.

Tonight I’m spending that always pleasantly nervous pre-tour ‘eve packing and repacking panniers, finding out what I forgot to bring and generally taking it as easy as one can when pleasantly nervous. I’ve also had the chance to change my mind on how to start things off tomorrow about ten times.

My first, tenth and current plan is to ride from said small bike shop to the Metro “Blue Line” from one end to the other, Santa Apolónia to Reboleira, then catch an “urbanos” train to Sintra, followed by my first actual bicycle riding from there to Peniche on the coast. In between I’ve considered crazy and crazier ideas, such as riding all the way from the East Side of Lisbon to Peniche (right at 101 miles).

So far some small form of sanity is prevailing and it’s Blue Line and so forth.

The small bike shop mentioned above is Cenas a Pedal, about the only Local Bike Shop in all of Lisbon, and almost certainly the only such shop in all of Portugal run by a guy who rides his crated dog to work atop the extended back of a Surly “Big Dummy.”

Bruno Teixeira Santos, said dog-carrying proprietor, has been essential to my choosing to start a bike tour in Lisbon. Having tried the “travel with folding bike method,” the “fly with big boxed bike” method, and the “buy a bike when you get to Europe” method, I’ve most enjoyed the latter, in a tour of Eastern Germany in 2009.

So I decided to buy a touring bicycle in Portugal, which is kinda like deciding to buy a brownstone in Albuquerque. I ran into Bruno’s shop online, sent one inquiry and, about 60 emails back and forth later, I’m picking up a new German VSF sorta-kinda touring bike tomorrow morning.

I say “sorta-kinda” because I’m going with a less gaudy version of bike to save a few bucks, and, perhaps unsuccessfully, to prove one doesn’t need a $2500, or even $1500, bike to tour.

Bruno has been absolutely great and supportive throughout, including some harried tracking down of my bike as it took an apparent intergalactic journey from the VSF plant in Bremen to Bruno’s shop in Lisbon.  Such is the situation in Portugal, and I’m sure Bruno’s Surly Big Dummy arrived just as slowly, as did the other really sweet rides packed into his dinky LBS.

Portugal has a way to go in terms of certain infrastructure, bicycle industry included.

Nevertheless, Bruno gave me the good news this late afternoon and I got to see my new “baby.” Like a bad father, I don’t have photos, yet, but this, to this point, unnamed bicycle will look much more photogenic when I put four panniers and about 83 lbs. of crap all over him/her.

So that’s about set, and it’s about time to try to sleep on the night before a big bicycle tour. Good luck with that. So many things can go wrong! I am so unprepared! My Portuguese  (a language that sounds like Spanish with a Russian accent when spoken) consists of three or four words!

Those and many other exclamatory thoughts to overly ponder this evening and early morn. That’s okay, I’ll get through the first day of riding on sheer adrenaline, or at least the first 30 km.

Unfortunately, I’ll still have about 60 km to go when that “bonk” comes. Oh well, let’s distract ourselves from that impending truth with a few more photos from Lisbon… 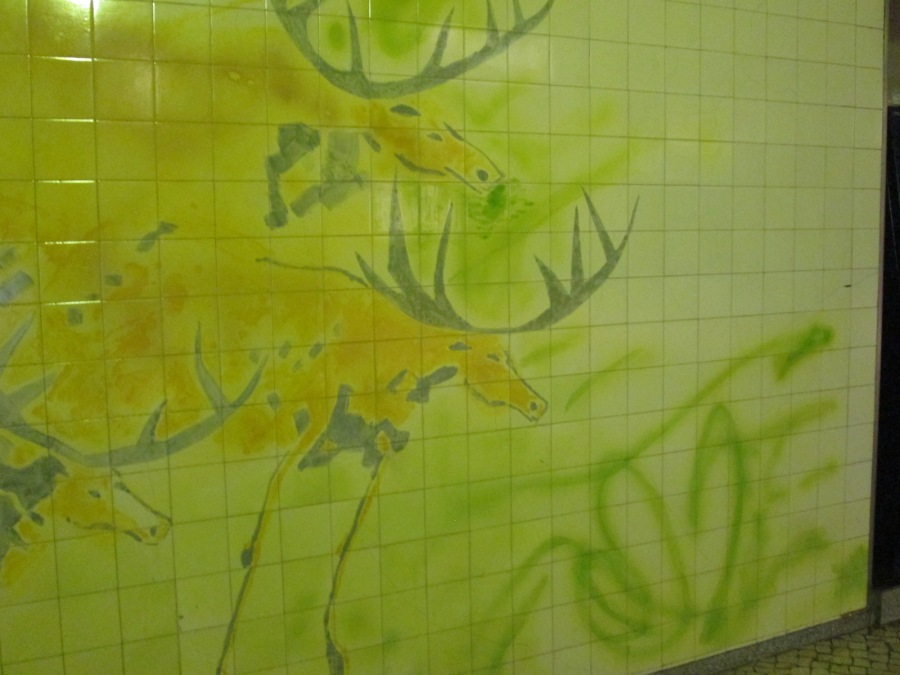 More subway art, this time from the Jardim Zoological station.

It’s touristy as Hell, but the river alongside Praça do Comércio is a sight. 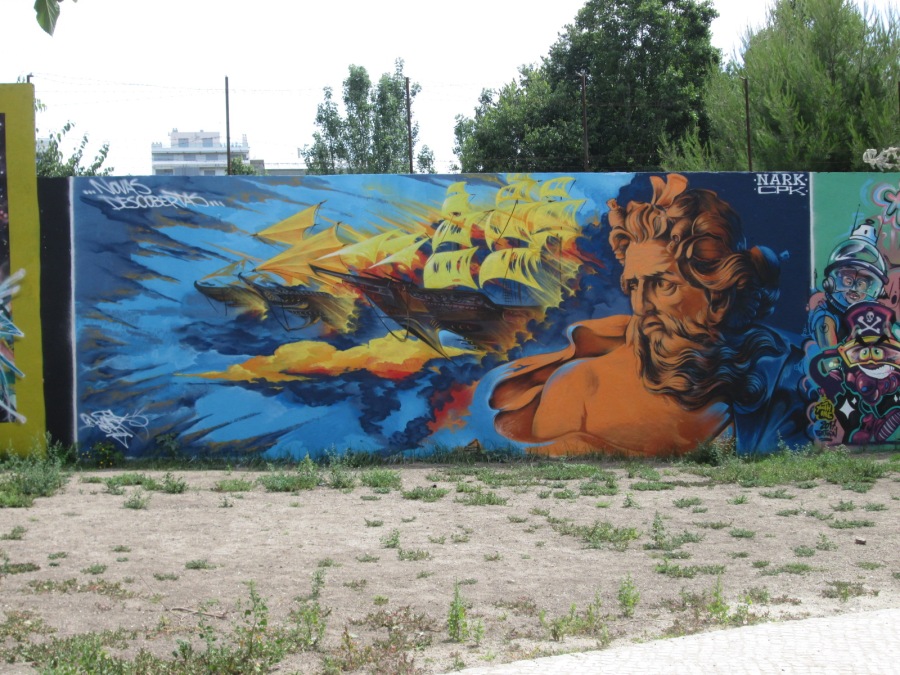 A good panel from a long list of excellent mural pieces along the road to Campolide.

And this one is the most captivating. I stopped for quite a while taking this in.