1,327 miles and three or four countries later, I’m in a “Toyoko Inn” immediately adjacent to the Frankfurt am Main train station with the air conditioner cranked to “Ice Station Zebra.”

It was a hot day of touring, Albuquerque hot, but what a lovely end to a lovely tour.

As I mentioned yesterday, important life lessons have been learned, surely to be forgotten, again and again, when the day-to-day post-tour life kicks in. Still, this tour has probably been the greatest of the seven or eight I’ve done in the past decade or so.

And today was no exception, with the absolute easiest ride into a major city I’ve ever experienced in a tour (or anywhere). Getting into Frankfurt on the R3 route was idyllic, serene and everything all such big city travails are not. I kept waiting for TOWN to hit, but km after km of fields gently yielded only to pleasant bike paths along the Main River with skyscrapers on the other side.

A quick cross on one of the many bike/ped bridges and I was at my personal Ice Station Zebra within minutes. After checking in it rained heavily, and the busy city I never had to cycle in is steamy and bad smelling as I walk a bit of it. Like a big city in Summer. Glad I didn’t have to ride in that.

And from here, it’s a train to Hannover tomorrow, another train to Copenhagen thereafter and back to ABQ. I could go on and on, but will spare readers more pontification.  Instead, at least for now, here’s a photo or two from these last few days…

I’ve stayed in roughly 35 different places this tour, perhaps none better all around that my balcony overlooking a vineyard and the Palatinate valley in Diedesfeld outside Neustadt on the Weinstrasse. A ridiculously good room, too, breakfast included for 49 Euros.

I’ve finally decided that the name of “my” bike (scheduled to be sold tomorrow) is “Frankie Mitts,” a name chosen to honor French President Francois Mitterand, who had a bridge I grew to love (after having a hell of a time finding it in a thunderstorm) named after him in Bordeaux. Here’s Frankie next to a highway bridge outside Worms (yes, that’s the name of the town).

This completely unintentional shot seems to have stumbled across some sort of aesthetic symmetry.

A poppy seed roll as big as one’s head starts the day along the Rhein. 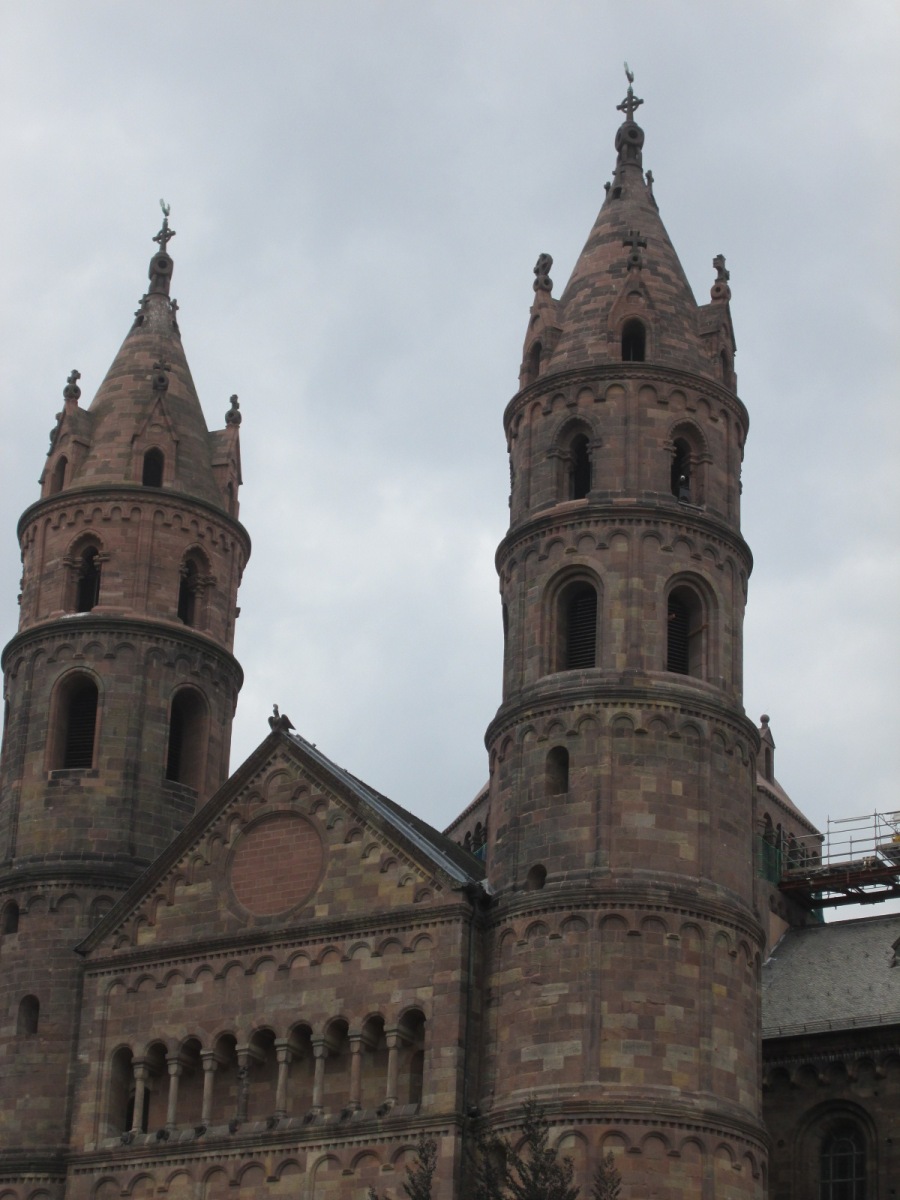 Part of the huge church in Worms, perhaps the only town named after a They Might Be Giants song. I say this despite the town being named about 1,000 years before “Dr. Worm” came out and in spite of the whole “Dr.” angle. I can more truthfully report that it was absolutely impossible for me not to hum/sing “Dr. Worm” the entire time I was anywhere near this town. 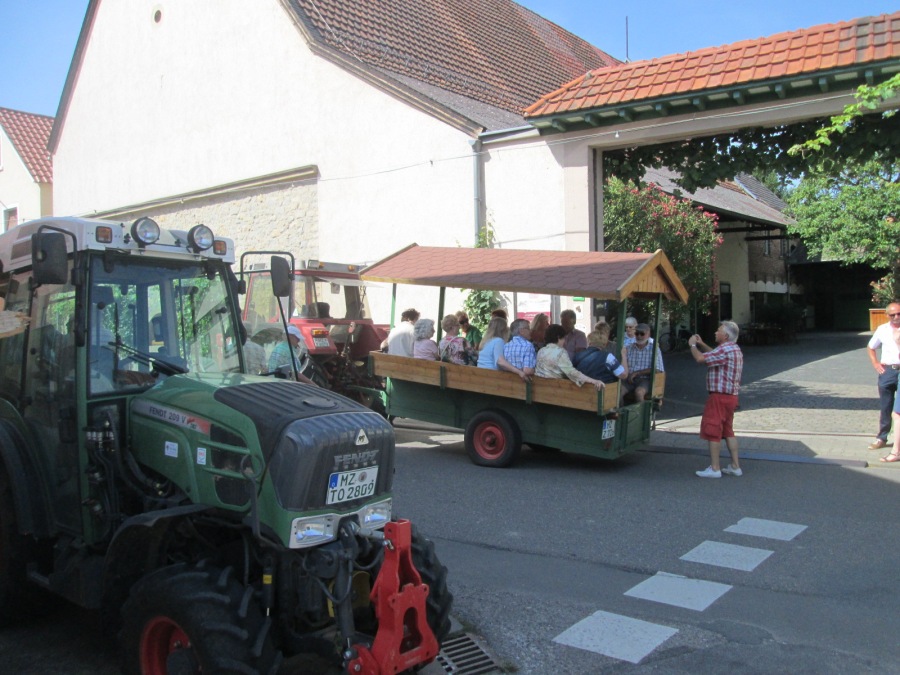 Tourists loading up to visit a vineyard near Guntersblum. The winery feeds the folks breakfast, then tractors them out to the vines.

Marker for the Jewish Cemetery in Guntersblum. Peering over the rock wall, I did see…

Typical wall mural found all over these German villages. No idea what this one signifies.

A kind Dutch couple from Rotterdam took my picture on the ferry across the Rhein at Nierstein. They were traveling 1,100 km in 11 days down to Italy, including crossing the Alps. Gulp. Good luck to them!

It turns out the Rhein is the 2nd to last of the many, many rivers I’ve crossed/ridden along this tour. The Rhein gets flack for its industrial grittiness, but it has its very nice stretches, such as this.

And after hemming and hawing, I decide to follow the Rhein to Mainz. Lovely town, but I just rode back across the Rhein to get to my final river… 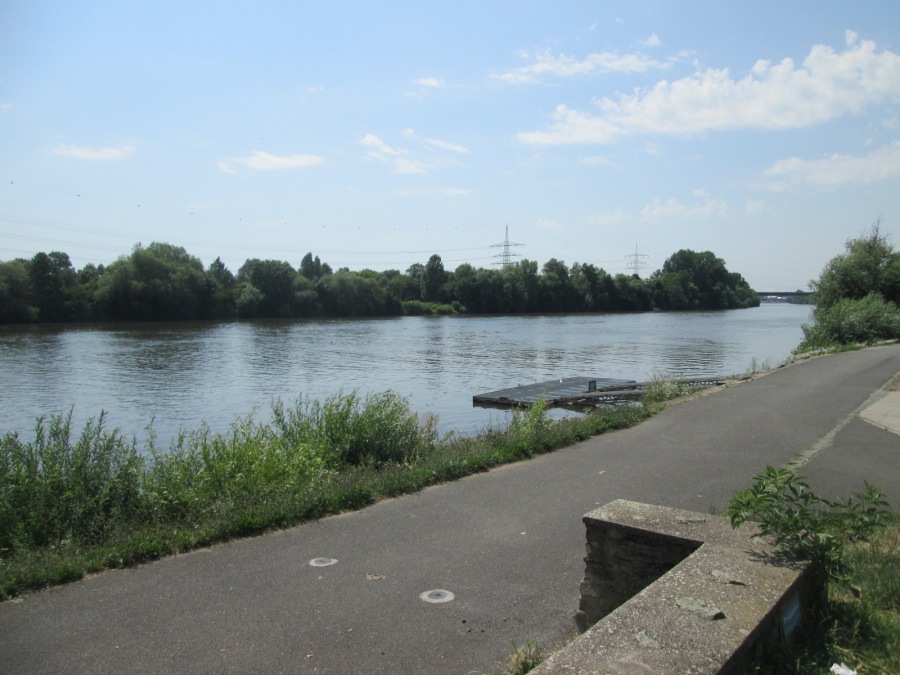 The Main, which I followed all the way into Frankfurt.

And, fortunately, the cycling goes on forever. This time toward some kids on horses along the river.

One thing I always kick myself about post-tour is that I don’t stop enough for ice cream. Soon, again, I won’t be riding 75 km a day, and constantly eating ice cream will be bad form, in every meaning of the word. Still, I did take time to have this one in blazing heat outside Frankfurt. Remember: Enjoy every ice cream pucker you can, friends.

Well, that’s it. Time to go home. Thanks for following along.