Better Burque has gotten into a habit, around the 15th of every month, of checking the latest Monthly Fatality Report update from the Traffic Research Unit (TRU) at UNM. For reasons probably no more sinister than they are busy, there’s been no TRU October update posted to this point, November 28th.

Again, TRU is probably just busy. One frets that TRU might be busy counting up all the pedestrian fatalities in a month which saw reports of deaths here, here and here around Albuquerque. The Albuquerque Journal’s Editorial Board has also noticed the spike in pedestrian fatalities, one indirect benefit of the “Panhandler’s Ordinance” recently passed in the City.

Hence there might be others beside Better Burque waiting to see the October TRU report. Just pointing that out.

More importantly, report or no report, it will be very interesting, and hopefully far more encouraging, to see if the rate of pedestrian crashes/deaths continues to be lower through the Central Avenue corridor due to sidewalk, lighting and other improvements through the Albuquerque Rapid Transit Project. Unofficial eyeballing through the period of A.R.T. construction seemed to show a dramatic reduction in pedestrian crashes/deaths, and we’ll see if replacing the orange barrels with a finished product maintains that dramatic reduction.

The importance of Central in any work toward making it safer to walk around our city is made clear in this TRU-constructed map below of pedestrian crashes 2014-2016: 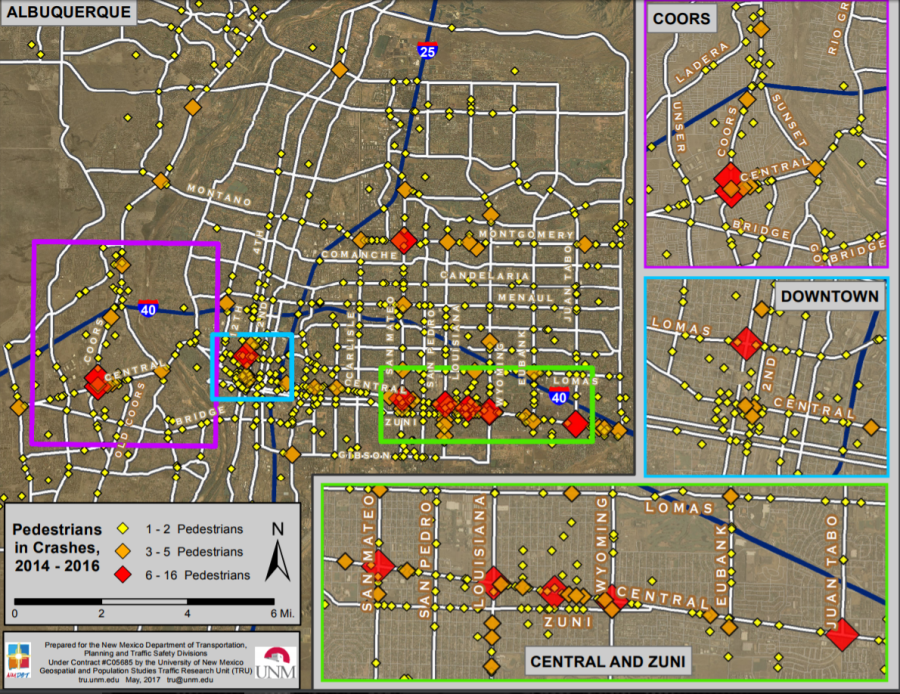 Unsurprisingly, many of those red diamonds are not only on Central, but at intersections with newly constructed A.R.T. stations. Among the many implications of the graphic above is the question: Will A.R.T. ridership ever equal Rapid Ride if potential riders don’t feel safe crossing one-half of these “diamond” intersections along Central?

Toward this safer end, improvements, such as HAWK signals at several points, offer much promise. Still, both actual statistics and public perception indicating safety will be vital on many levels, none more important than in actually reducing the deaths at “diamond” intersections such as Central @ San Mateo, where another pedestrian was killed last month.

One thought on “Pedestrians, Central Ave. and A.R.T.”