Every job has its easy and not-so-easy components.

Take teaching, for instance, a thing I know at least enough about to keep myself in trouble. Teaching the sword fight scene in “Macbeth” to 8th Graders is easy. You can teach quantum physics, epistemology and algebraic geometry to 8th Graders, as long as they get to go after each other with swords.

Teaching grammar, on the other hand, is hard, although I admit I haven’t tried swords to explain gerunds or indirect objects…yet. That’s a good idea, actually.

Meanwhile, there are also easy and not-so-easy jobs in the field of traffic engineering. Here’s an example of the not-so-easy, made even more difficult by the new fact that this is supposed to be a bike boulevard: 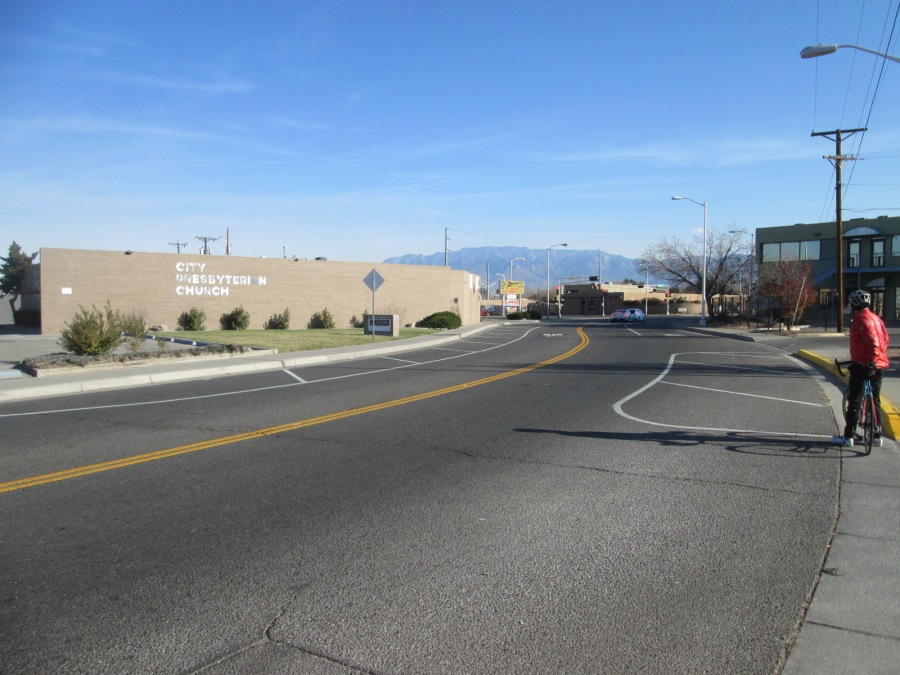 Yup, this is Copper just west of San Mateo. A veritable speedway of overly wide pavement just perfect for high-speed motorists who take San Mateo because they like driving highway speeds, even though San Mateo technically isn’t a highway.  That mentality combined with all this pavement, and a nice “racing” curve to boot, and you’ve got the ingredients for anything but a bike boulevard, which this stretch now happens to be as part of the new Fair Heights Bike Boulevard.

So how do you make it a bike boulevard?

Good question. Note the plentiful new striping above. That’s the attempt, so far, to “calm” Copper west of San Mateo. The thinking is the mighty power of the white stripe will have some impact by forcing Al Unser and Friends to slow down a bit in order to better fit in the newly squeezed lane.

Yes, that’s a “sharrow” stencil in the newly squeezed lane westbound near the intersection. In case you don’t know, and you’re certainly not alone, “sharrow” signs mean cyclists can take the lane in front of you and your Ferrari, even if they aren’t going quite the 63 mph you’d be driving if not for them being in the way.

That said, looking at the photo above, I feel pretty confident that about 98% of cyclists, including me, will just ride over those horizontal white stripes westbound intended to emulate something like a curb, and leave Al Unser and his Ferrari to the newly squeezed driving lane. Whether Al will wander over into that de facto “bike lane” is another thing to consider, and another of myriad aspects that show how hard traffic engineering can be.

And like teaching gerunds and many other hard things, Burque traffic engineers are treating this as a work in progress. A first step toward what we use to call a “final solution” until some incredibly horrific events cornered the market on that term. So let’s call it working toward a “permanent fix.”

Being a blog of ideas about making Burque Better, here’s a thought or two, admittedly from someone far better at teaching sword fight scenes than road engineering, on how we can get closer to a permanent fix:

If not numbers 1-3 above, we could spend bigger bucks and just replace the striping that is supposed to act like a curb with actual curb, but that would squeeze cyclists into having to “sharrow,” and you don’t have to be a “scaredy cat” cyclist, the less risk-acceptant riders bike boulevards are built to entice, to get queasy thinking about getting squeezed thus.

Okay, I’ll get back to teaching sword fights now, but not before closing with a very bad “Macbeth” sword fight scene reference:

“Lay on vertical separation, MacDuff, and damned be the traffic engineer who first cries ‘Hold! Enough!'”

P.S.: “Macbeth” nerds out there, and I know you’re out there, are thinking “Doesn’t Macbeth say this right before he gets killed, has his head put on a pike, and this head-on-pike is paraded around joyously?” And isn’t that kinda antithetical to your theme of safety in this post?” Hey, come on, “Macbeth” nerds, let’s have some dramatic license here.