I had the chance to ride up the Paseo de las Montanas multi-use path late last week to personally check out one of the motion-detection flashing systems along this trail we’ve been writing about. Above we see the Wyoming crossing “in action” as a woman and her dog wait in the media refuge. There was no indication that the motion-detect flashing lights were engaged, even though I was moving about at the westside sidewalk taking the photo above, and the woman/dog were in process of crossing.

I say “no indication” due to the fact drivers were whizzing by at 100% of the typical whizzing rate on Wyoming Boulevard. I also say that because users can’t actually see if the lights are engaged due to their distance and angle from the user.

This short visit confirmed input from others that these motion-detection crossings are dangerously awful. Note also the lack of crosswalk striping in the photo above. Having been designed solely with cyclists in mind, this “multi-use path” crossing has no crosswalk striping and thus is not a “marked crosswalk” in the minds of Albuquerque Police Department.

In other words, a walker’s only recognized safety feature here are some flashing lights that don’t work.

This crossing and many others like it in Burque don’t work, particularly for those walking. Meanwhile, here’s a map screengrab identifying location of all HAWK signals in Tucson: 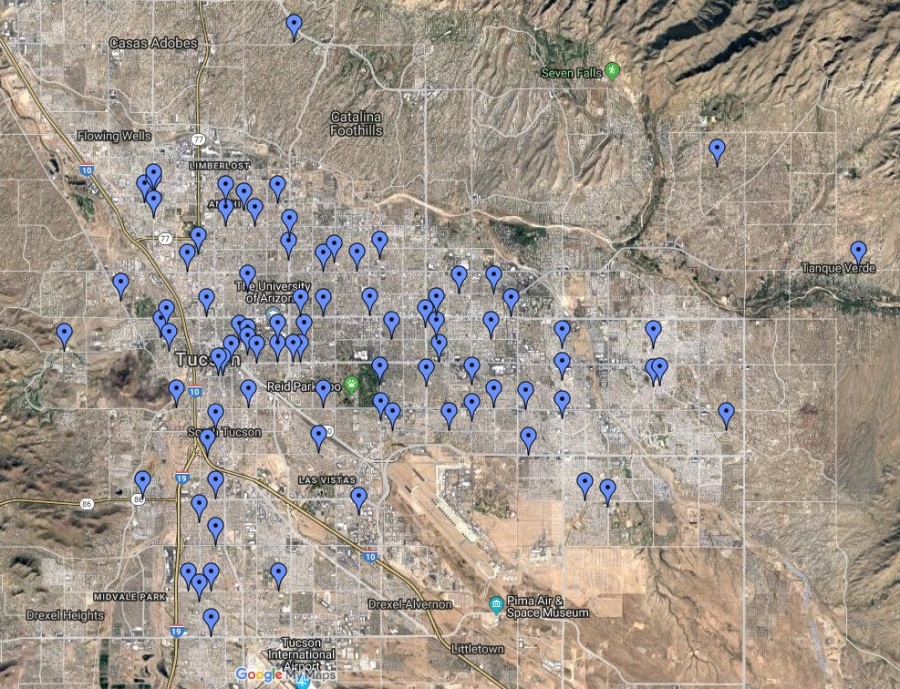 We can most certainly debate the pros/cons of HAWK signals, and their effectiveness to this point in ABQ, but Tucson undeniably has Burque beat in terms of committing to a treatment technology. A look at multi-use path crossings in ABQ shows a dangerous mish-mash of motion-detection that doesn’t work properly, crosswalk striping, no crosswalk striping, median refuges, no median refuges, and lots of signs notifying drivers of cyclists but not walkers.

This city and area need to commit to one consistent, long-standing approach in making it safer for walkers and cyclists to cross our streets. The current state of multi-use path crossings show us how very far we have to go.