§ 8-2-3-6  PEDESTRIAN IN CROSSWALK.
(A)   In the absence of operating traffic controls at an intersection, the operator of a bicycle or vehicle shall slow down or stop to yield the right-of-way to a pedestrian in a marked or unmarked crosswalk.  However, no pedestrian shall suddenly leave a curb or other place of safety and walk or run into the path of a vehicle which is so close that it is impossible for the driver to stop or yield.

Better Burque is currently working on several fronts toward a better understanding of  crosswalks in our city, including an “audit” of places where crosswalk striping exists on major roads without signalization (i.e., a red light). This “audit” consists of using Google Streetview’s satellite option to simply scan the major streets. It would make this seem slightly less nerdy if BB was doing so on a MacArthur or Federal Highway Administration grant, but everybody has to have a hobby.

Such “research” shows that almost all such crossings are in place near schools, but a few “marked crosswalks” lie in situations like Piedra Lisa Trail above. As noted in previous examinations of such roadway treatments following discovery that a walker was killed on such a crossing in 2017, the City is a hodge-podge of inconsistent signage, striping, and flashing lights in such instances.

What is also inconsistent is driver behavior, understandably, in response to walkers attempting to cross. As noted in the provision of the Albuquerque Traffic Code above, “the operator of a bicycle or vehicle shall slow down or stop to yield the right-of-way to a pedestrian in a marked or unmarked crosswalk. (author underlining).” Despite the striping at Piedra Lisa and Menaul seen above, one would guess approximately 0% of drivers “slow down or stop to yield” there.

Perhaps even more dangerously are the situations in which a driver actually does “slow down or stop to yield,” as anyone who tries to walk or cycle such crossings can attest. That’s because the percentage of drivers who do so is very small and the number of nearby drivers enraged by the rare “slow down or stop to yield” driver very, very large. Okay, sometimes it’s not rage, merely confusion, but the bottom line is we’re left with some combination of rage and confusion in all such cases, none of which make these crossings any more comfortable and all of which make them even more dangerous than they already are.

As a result, Better Burque is in the weird position of recommending that NOBODY “slow down or stop to yield,” despite such action being explicitly proscribed in the Traffic Code. This counter-intuitive response is very indicative of the following:

For now, just as was true on that lovely Spring 2017 day the Google Streetview car drove Peidra Lisa Trail at Menaul, we’re left with a person pushing a stroller deciding when to risk it while drivers going 40 mph (at least) have their view blocked by lovely budding trees in the median. 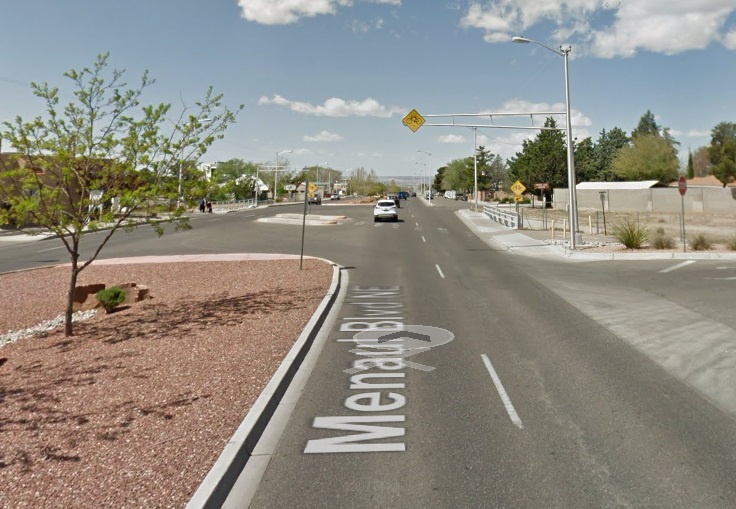 And we wonder why “nobody” walks in this town.

P.S.: Some readers might have noticed that the signs at the Piedra Lisa/Menaul crossing only reference cyclists. There’s no sign indicating that walkers might be using Piedra Lisa, too. Methinks this mindset helps explain the roadway engineering at these spots as well. These crossings are designed for survival (albeit poorly/inconsistently) if one is going as fast as someone on a bicycle. If you’re walking…good luck.