Scot from Better Burque (me) last night appeared in a KRQE news story based on our weekend post about a bike ride up Coors Boulevard through Paseo del Norte and this sign we came across: 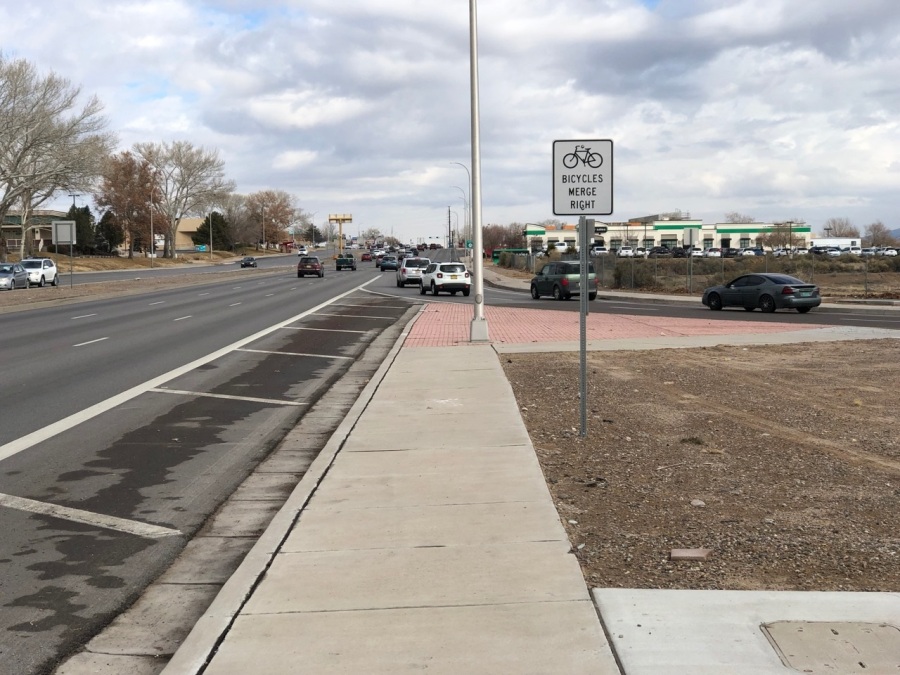 While relating the tale and a few poorly crafted remarks to the reporter, it occurred to me that it all came out a bit like we had been Antarctic explorers attempting a Winter traverse, when all we’d really done was ride bicycles up Coors. While we did stop, take photos, and relate the event, there are people who walk and cycle through/near this interchange every day.  For example:

Despite the very apparent attempt by those who authorized and built this interchange to prevent *anyone from cycling or walking anywhere near it, Coors and Paseo del Norte’s location and amenities make it a hugely important spot/crossing, including for folks NOT in motorized vehicles.

Burque is replete with highly dangerous, yet important spots/crossings and the only real “story” here is the idiocy of the sign and the civic hubris of designating Coors as a “bike facility” in the first place. That designation speaks not only as the result of a bike network crafted by those who do not ride bicycles, but also to just how vital the corridor is to transportation system connectivity in this part of town.

Without this stretch of Coors on the bike map, north/south connections immediately west of the River don’t exist:

But having a stupidly dangerous cycling route on the bike map is far worse than having no route at all. While it won’t stop folks from cycling/walking in this important area, this sin of our transportation engineering fathers (and they were all guys, of course) must not be designated as a “bike route” on the Bike Map.

*You’ve got to LOVE the little pedestrian crossing at the Paseo on-ramp the cyclist is waiting at. It is a “marked crosswalk” with signs. Wouldn’t you feel so safe and cuddly crossing? How would you like to be this cyclist?

One thought on “Epilogue About That Sign on Coors Boulevard”