For quite some time now, Albuquerque’s Department of Planning and the Mayor’s Office has been piecing together rules of engagement for the now pretty long-awaited invasion (aka fabulous addition) of e-scooters. Those rules and that invasion are evidently now imminent.

So the answer to “where are they?” seems nigh, but the question of where riders can legally/logically go is much more up in the air. As in one kinda wishes e-scooters could fly.

Are they to be ridden on the sidewalk? The road? Only roads with bike infrastructure, such as bike lanes? Answers A & C? The experience of other cities having earlier embraced scooters has generally been to legislate riders away from the sidewalk, as discussed here in Salt Lake City.

In a nutshell, the problem is speed. Scooters are too fast for the sidewalk and too slow/frail for the road. Ignoring for a moment other aspects, such as some people “drive” scooters like idiots (as is true for all means of travel), walkers are too often buzzed by scooter riders on the sidewalk, and scooter riders are too often injured trying to ride closer to road speeds inappropriate/incapable of scooter technology:

So what? We’ll just have e-scooter riders use bike lanes! Well…

Thinking of where e-scooter usage will almost certainly be highest, downtown, let’s look again at the proposed changes that will come along with implementation of a 20 mph “Downtown Safe Zone” (DSZ). 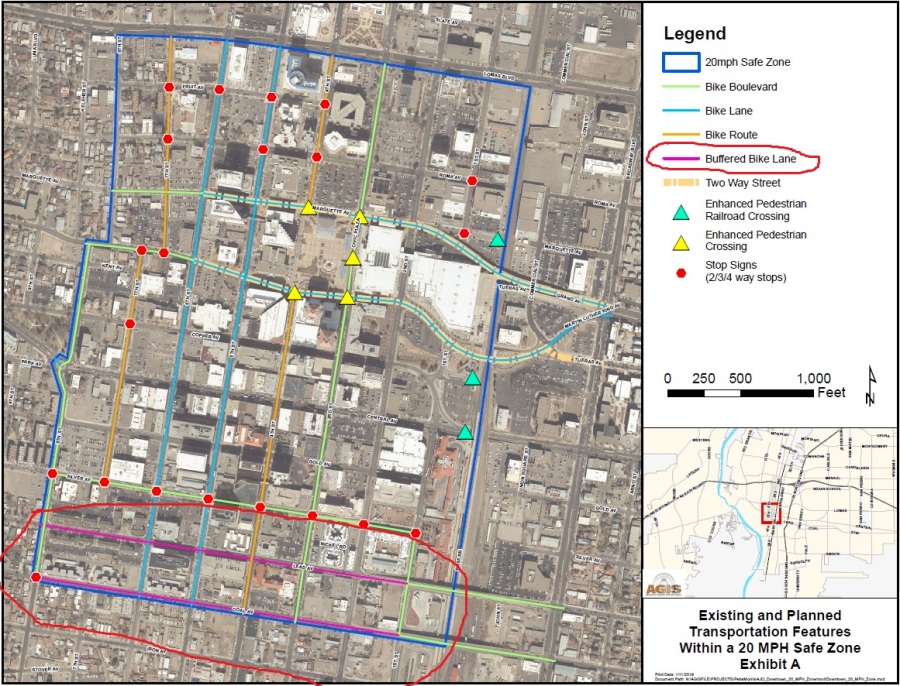 As mentioned in Jessica Dyer’s Albuquerque Journal story on passage of the DSZ this past Monday:

(Pat) Montoya from Municipal Development said a bike lane reduction is among the more imminent changes. The city plans to restripe 5th between Lomas and Gold and 4th from Gold to Tijeras, moving the existing parking spaces next to the curb, where there are currently bike lanes. Crews will paint “sharrows” on the streets, indicating that cars and bikes are to share the roadway, Montoya said.

“There should be no bike lanes left (within the safe zone) once we do all of our restriping,” he said.

BB is seeking clarification from the City about the blanket “no bike lanes left (within the safe zone)” but it looks 100% certain that there will be no bike lanes in any of the 50-Mile Activity Loop area near Civic Plaza. The further question to clarify is whether Lead and Coal will get “buffered bike lanes” as indicated on the DSZ map passed as part of the resolution.

It seems likely that there will, eventually, be buffered bike lanes on Lead/Coal from 2nd to 8th, but, even so, that leaves the rest of downtown without bike lanes. So, again, where are e-scooter riders supposed to ride?

How about 2nd Street? As any bike rider can tell you, buses and inadequate maintenance have made 2nd a bumpy, jarring teeth-rattler, nowhere near smooth enough for safe e-scooter travel. The same is unfortunately true to some extent for several other downtown streets. Then there’s the matter of e-scooters (hopefully) not going anywhere near 20 mph.

As is ALWAYS the case, there’s two ways to look at all this: 1. As a fascinating experiment in public policy; 2. As a recipe for injury, death, litigation, and chaos. Focusing on the cheerier former way of looking at things, it will be interesting, and perhaps morbidly fun, to see how all this plays out.

2 thoughts on “Where and Whither Burque E-Scooters?”