The Albuquerque Journal editorial board yesterday chimed in with its view on the current status of the proposed Complete Streets Ordinance renewal/revision, chiding its authors for lack of safety and “user volumes” emphasis.

I can’t find fault with that analysis, and the lack of safety/volumes emphasis is an important aspect of the legislation’s overall lack of implementation detail. The Journal goes on to criticize the revision’s attention to overcoming inequities in transportation safety, a criticism also made by City Councilor Trudy Jones at the recent Land Use, Planning, and Zoning Committee meeting at which the legislation moved to the full Council “without recommendation.”

This latter criticism seems more geographically political (i.e., City Council District) than accurate in terms of the problem. As outlined in an April post here, the Mid-Region Council of Governments (MRCOG) looked at all 2017 walking deaths, and created the following graphic including census tract information in which low-income/communities of color have a higher “equity index.” 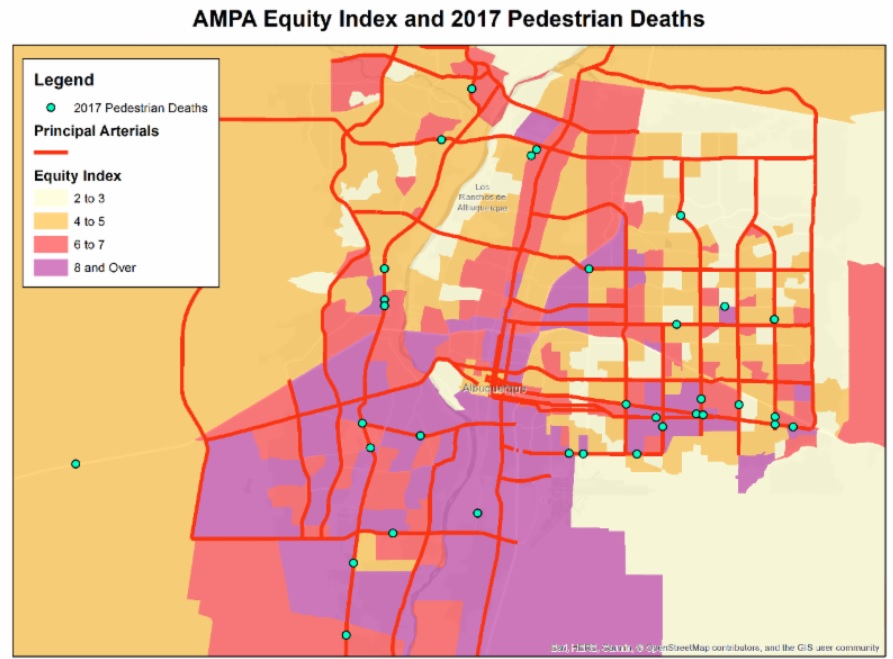 While the blue dots above denote pedestrian deaths, safety at pretty much all of the dots is dramatically lower for all users. In short, the purple stretches of:

account for many injuries/deaths for all users, as noted here in this “High Fatality and Injury Network” graphic constructed as part of the recently area-wide accepted “Regional Traffic Safety Action Plan”

While other red appears above, a huge swath of the problem is these four stroads, each multi-lane arterials. Fixing just these death traps, for starters, particularly in lower-income stretches is a precise, hugely appropriate safety step the proposed ordinance should outline or at least have the necessary teeth and concomitant Administration declaration to make it clear the renewed/revised ordinance will address these killers posthaste.

Hence the bigger problem with the proposed ordinance isn’t equity (although that is a political problem, the fact is the legislation is almost certain to pass, if not unanimously), it’s the lack of any firm language ensuring safety. In fact, as the Journal correctly notes, it doesn’t even mention the term.

What is mentioned in terms of implementation is this:

And our concerns with this implementation language isn’t the misspelling of “evealution.” And it’s not even the lack of a word like “safety.” What’s worrisome is the lack of any idea what the “process for implementation” will look like as the empowered body, the Administration (i.e., Mayor Keller and Co.) have offered ZERO input on what that process might be or a single thought on traffic safety other than a “pledge” for Vision Zero, whatever that means.

Meanwhile, what needs fixing most has already been outlined and should serve as a script from which the Administration can, now, illustrate how it will implement the revised Complete Streets Ordinance and how those interested can be involved in that successful implementation.

Otherwise, we have a proposal with no mention of safety. Nothing more.

*Both Coors and Gibson involve overlapping jurisdictional obstacles that cry out for a Complete Streets plan throughout the City, County, and State. Until that time, these and other multi-jurisdictional death traps will continue to be just that.

One thought on “Where to Start with “Complete Streets”? Answer: Here, Here, and Here”