The preliminary Albuquerque Police Department report on the crash that killed 69-year-old Stanley Atkinson this past Monday cites its primary cause as “pedestrian error.”

A closer look illustrates the lack of logic in such a finding and insight into how deeply biased law enforcement tilts for drivers and against anyone else using our roadways. The report also demonstrates, for the umpteenth time, that dangerous roadway engineering is almost never considered as worthy of blame in such incidents.

Mr. Atkinson, who lived on Truman NE north of Lomas Blvd., was waiting in the median eastbound left-turn lane to go northbound, presumably to his residence. The 28-year-old driver was exiting Sprouts’ Farmers Market grocery store parking lot to head westbound on Lomas.

Here’s a bird’s eye and driver POV look via Google: 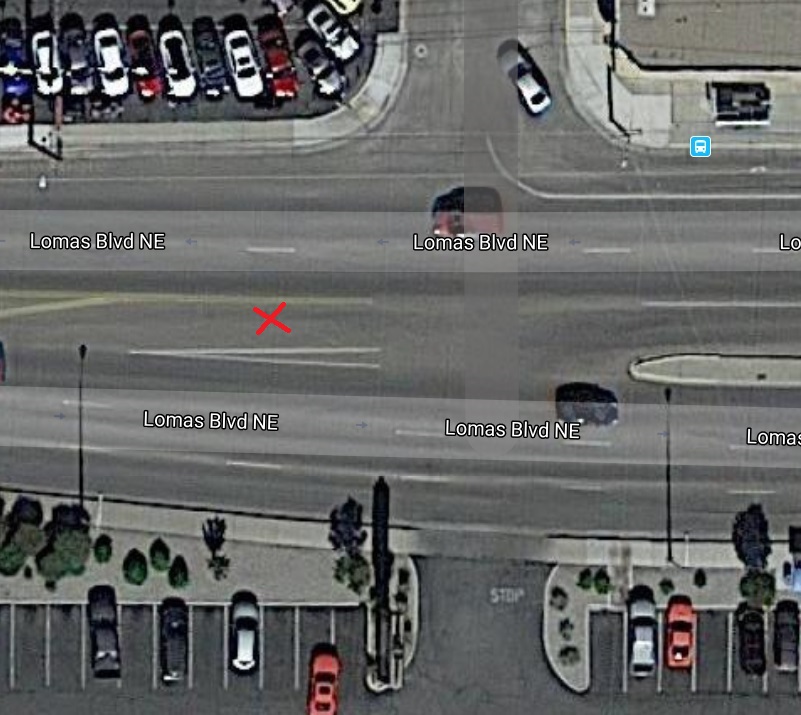 It is not entirely clear from the report if Mr. Atkinson was seated on his bicycle on standing next to it as he waited. Given how busy Lomas Blvd. can be, it’s quite possible he was tired of waiting in a seated position and got off the bike. He might have even been walking the bike across Lomas, something many cyclists do when crossing busy streets.

If you’re a cyclist, you know these things through experience. Not many law enforcement folks are cyclist. At least not apparently.

Whether seated on the bike waiting, or standing next to it while waiting, Mr. Atkinson has every right to be in that left-turn lane. As every cyclist knows, we are to “drive your bike as you would any vehicle.” The eastbound Lomas median turn lane to go northbound on Truman is designed, albeit poorly, for ANY vehicle.

Of course, it would have been deemed the driver’s fault, just as it would be in this case, if law enforcement understood roadway laws concerning cyclists.

Looking at those Google Streetviews above, particularly the driver POV screengrab, it’s very easy to commiserate with the driver in this case. There’s a ton of things going on when trying to turning left out of that Sprouts’ parking lot. In addition to busy Lomas, there’s the frequently used westbound left-turn lane to go into the Sprouts’ parking lot.

Yes, the driver should have seen Mr. Atkinson, who had every right to be with his pink bicycle in that left-turn lane. If one thinks this assignment of blame too harsh on the driver, then one is really blaming the poor engineering of this intersection. Why isn’t there an eastbound pin-curb? Given how dangerous it is, why are left-turns even legal exiting the Sprouts’ parking lot?

In our unfortunate reality, bad roadway engineering very often only gets fixed after somebody dies. Well, somebody is dead; however, in this case, at least to this point, we’re just gonna call this “pedestrian error,” not just ignoring the pink bicycle, but all the driver and engineering negligence that led to someone being killed, despite that victim having every right to be in that left-turn lane.

Thoughts go out to those who knew Mr. Atkinson and others most affected by his death, including the driver. Roadway fatalities are painful for so many, and are happening in our City/State in record numbers. We’re not going to truly address this public health crisis until we stop blaming victims, betraying them to blithely sweep driving, law enforcement, and engineering negligence under the roadway rug.

Stay safe out there, everybody.

4 thoughts on “Was it “Pedestrian Error” That Killed Someone This Week at Lomas & Truman?”