Because you have things to do, even/especially during a pandemic, you probably haven’t spent 99.3% of the last few days observing, pondering, obsessing, and reporting on the somewhat temporary closure of the Embudo Trail at its Carlisle underpass between I-40 and Menaul.

Knowing you’re busy, let’s quickly catch you up via photos, maps, arrows, and circles. Let’s start with some orientation into the location, worksite, and detour.

A tad hard to fully discern amid the bad graphics above, but you do get an idea of how tough it is here to design a safe detour during this closure, particularly given that Embudo Trail users are of all ages and mobility/comfort levels. Obviously the quicker work is completed and this underpass reopens, the better.

The inherent difficulty in designing a safe detour was complicated in actual execution by this: Having first come across the closure a couple of weeks ago, John, BB contributor and official staff photographer/graphic artist, noted the scary situation identified above. For some reason, Trail users were told to detour by going the wrong way on a little notch of Cutler that gets drivers from Carlisle to Green Jeans and other places such as Caliber’s indoor shooting range.

Now here’s where we’ll save beloved BB readers a hell of a lot of time and just briefly mention that the “Wrong Way Unto Death/Injury” situation outlined above led to a massive number of 311/SeeClickFix reports, replies, rants (by me), and reopening of reports.

Long report, and rant-filled, story short, here’s how the City has chosen to solve this dangerous situation as of yesterday, 5.27.20:

But what about the western approach to the detour? Here’s how that looks bird’s eye (John is so much better at these arrows than I am): 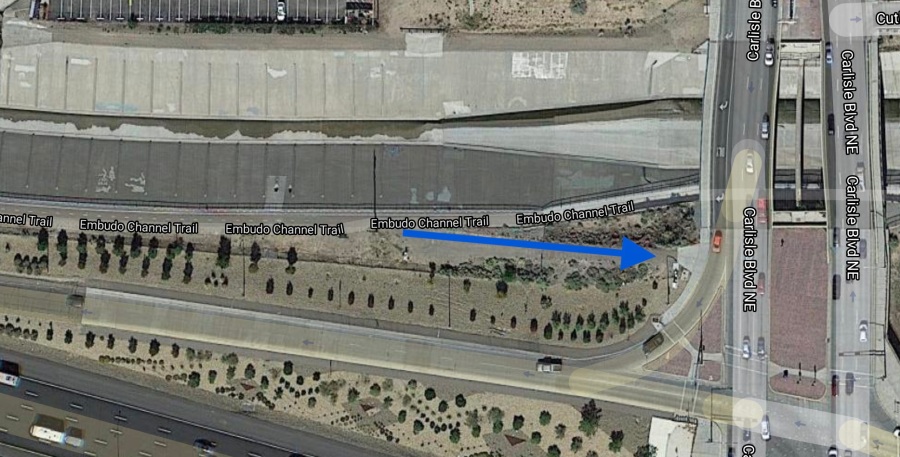 And here’s how it looks from the ground as of yesterday:

As there’s no arrow pointing users, one doesn’t know whether they are to take the dirt road immediately or commandeer that Penske Rental Truck instead to get up the hill to Carlisle. This lack of wayfinding is a lingering hallmark of this closure, a lack that goes all the way back to Embudo Trail’s western terminus at the North Diversion Channel Trail:

Nope. There’s no sign alerting users that the Trail has a pretty nasty, significantly less safe detour ahead. A fact made even “funnier” by the fact there’s no way to leave Embudo Trail between here and the detour a half-mile or so later.

In conclusion, let’s use a numbered list of final comments because this purportedly quick look has gone on long enough:

No word on when work on the underpass will be completed and when this closure/detour saga will end. Passing along such information is yet another thing to be learned from this experience and surely made a part of all future such projects.