I’ve found myself riding to public places during The Pandemic I normally wouldn’t visit. Not one for crowds, the very bad thing that is COVID-19 has brought me the good chance to ride the bike through places like UNM and Old Town Plaza in general serenity.

As you’ve probably discovered as well, those days of serenity are pretty much over now, and Albuquerque is opening up in all ways, including a marked resurrection of the tourist traffic at the Plaza. Despite waiting for several minutes to take the following photo, there was still somebody who wouldn’t “get out of the shot.”

Since taking this photo, I’ve thought quite a bit about the young man quite thoroughly reading the plaque, as well as about that plaque and those replica howitzer cannons still on the Plaza. And I’ve come to the conclusion that there should far less racist, inhuman, and militaristic bits of New Mexican history on our Plaza for this kids to read and admire.

I’m very far from the first person to think this, and calls for removing these and other Civil War items came to a head back in 2015, when, as a “compromise,” then Mayor Richard Berry ordered the Confederate flag then flying over the Plaza removed, along with two bizarrely inaccurate plaques donated and “emplaced by the New Mexico Sons of Confederate Veterans, April 9, 1982.”

Since that 2015 “compromise,” much has happened in our nation; hell, an amazing level of “much” has happened in the last 2-3 weeks. The murder of George Floyd has led to many things, including renewed calls (and action) to remove symbols of the Confederacy such as statues and U.S. Armed Forces’ bases named after Confederate officers.

It’s true that taking time to discuss and achieve removal of these Confederate public vestiges is time that might better be spent fully overthrowing a law enforcement culture in this country that has led to the death, false imprisonment, and other heinous mistreatment of people of color in this City, State, Nation. There’s much extremely important work to be done, and I’m looking forward to watching Mayor Keller’s press conference on his initiatives for police reform this morning.

But addressing the full scope of systemic racism encompasses tackling the full scope. And while I’ll admit I took the photo of the cannons above already thinking they should be removed, a bit more research and a bit more thinking about that young man conscientiously reading the plaque has me more convinced than ever that we can do several things at the same time when it comes to fully understanding and correcting the many, many, near endless components of institutionalized racism still plaguing us.

Albuquerque church Elder Michael Jefferson put it better than I can back in 2015:

The phrase from Elder Jefferson that most resonates in my thinking and research further on those cannons is “bias toward the Confederate Army.” While it’s strange on its face that we would have Confederate cannons instead of Union cannons “celebrating” New Mexico’s role in the Civil War, there’s a more subtle, more insidious bias at work here.

The story of the cannons is told in that plaque the young man so thoroughly read:

As you can read, Confederate commander Trevanion T. (Theodore) Teel had the original cannons buried, then later came back to show where they were buried. Major Teel’s biography at his home state’s Texas State Historical Association notes a great many accomplishments and acts, including the following:

In San Antonio Teel joined the Charles Bickley Castle of the Knights of the Golden Circle. On February 16, 1861, he mustered his KGC company into state service; the unit was under Col. Benjamin McCulloch when Gen. David E. Twiggs surrendered the federal property at San Antonio to Texas state troops.

Two historical notes about the paragraph above. Teel “mustered his KGC company into service” in mid-February 1861, fully two months before the Civil War officially begins at Fort Sumter, South Carolina. More important, what is this “Knights of the Golden Circle”? Clicking on the link in the quoted paragraph, we find the following:

The Knights of the Golden Circle (K.G.C.), a secretive organization created in 1854, proposed to establish a slaveholding empire encompassing the southern United States, the West Indies, Mexico, and parts of Central America. Centering on Havana, this empire would be some 2,400 miles in diameter—hence the name Golden Circle. Leaders of the K.G.C. argued that their empire would have a virtual monopoly on the world’s supply of tobacco and sugar and perhaps cotton and have the strength to preserve slavery in the South from constant attacks by northern Abolitionists.

Other sources add to our understanding of Major Teel. In his 2012 book Why Texans Fought in the Civil War, author Charles David Grear notes/quotes the following about the Major:

“Trevanion Theodore Teel of Sibley’s Brigade (the Confederate force involved in New Mexico Civil War fighting) expressed the motivation that slavery provided the men when he wrote, ‘California had to be conquered, so that there would be an outlet for slavery…{By conquering the Southwest} there would be plenty of room for the extension of slavery, which would greatly strengthen the Confederate States.'”

So this guy wants to not only maintain the “legal” ownership of other human beings as chattel, but to also extend that legal ownership west to California and south/east throughout Latin America? And just because this guy comes back and digs up some cannons he buried (to prevent the United States from using them to kill him and his fellow expansionist enslavers), we’re supposed to subsequently display these armaments proudly on our central Plaza?

Why are we giving Teel that satisfaction?

A look at the other side of the information plaque gives us a bit better idea of just how much semi-eternal satisfaction we’re giving Mayor Teel and his descendants. 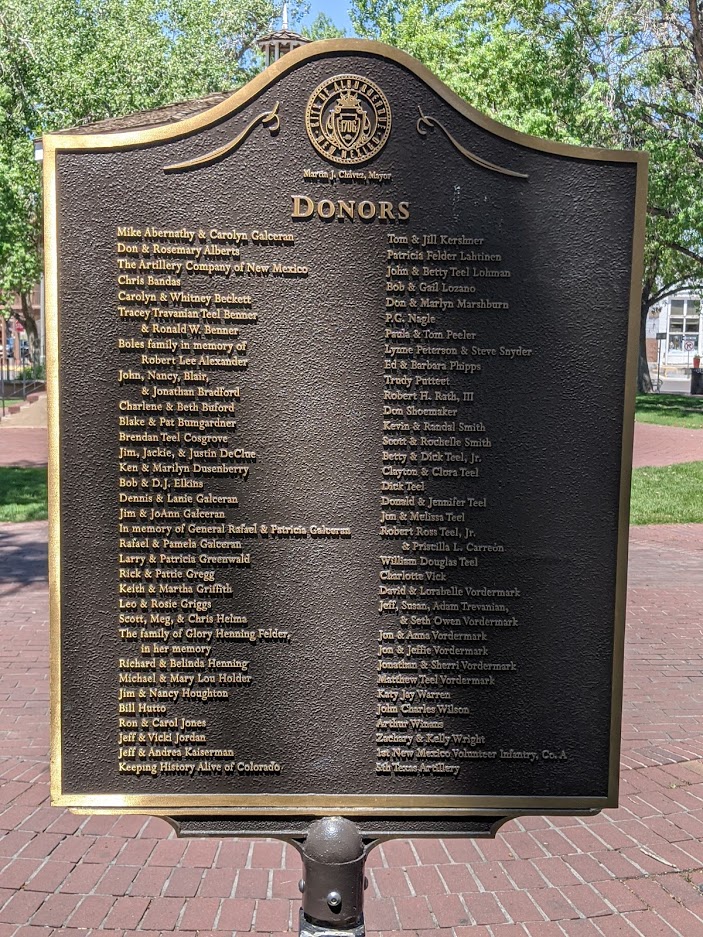 Apologies for the poor photograph, but I count at least 10 separate donors on this list with Teel in their names, more than 10 counting spouses. That brings up a two-part question that can be asked of many such monuments:

I don’t know the complete answer to these two questions, but sheer references to Teel alone tells me it’s almost certain the percentage of slave owners is significantly higher. One is tempted to consider that it might be damn close to something like 70-80% to 0%. Were any descendants of slaves asked about placement of these cannons back in 2007 when this restoration project was conducted?

Again, I don’t know, but I have a strong suspicion.

Having thought it some more, I’ve realized my initial and subsequent suspicion is greatly helped by my having grown up in Texas. We don’t run into it much here in New Mexico, but Texas and the South is overfilled with subtle and not-so-subtle slavery and slave-owner glorifying statues, armaments, plaques, etc. As was the case with the “Skirmish of Albuquerque” plaque removed in 2015, a great many of these markers are sponsored, paid for, donated, etc. by the descendants of slave owners.

Growing up in Dallas/Fort Worth, I couldn’t throw a rock without hitting one of these things. They were constant and seemingly ubiquitous reminders of “The Lost Cause” and “our Southern heritage” and all things Confederacy. Which is to very much say all things slavery. The markers normalized and romanticized the literal ownership of human beings by other human beings.

And many of those markers have come down in the last 2-3 weeks.

As an aging White man who grew up among all those many markers, it’s easy to see myself back about 40 years as that White kid thoroughly reading the plaque on the Plaza. I’ve also loved history. I’m immensely glad to see young men reading historical plaques, instead of staring into a phone.

Nevertheless, there’s a not-so-subtle historical perniciousness and attempt at familial rationalization in those cannons and that plaque, just as in all the many such markers I read, thoroughly, back in the mid-1970s. Presenting such perniciousness/rationalization without full context, such as would hopefully be the case in a museum, is to further normalize and romanticize these heinous people and their evil ideas. At some level, that’s why these folks donate to have them displayed.

Considering all that has happened and continues to happen in Albuquerque/New Mexico history, there are so many other stories and mementos we could celebrate on our Plaza. By choosing to have replica Confederate cannons as the most prominent historical, and only military, reference anywhere on the Plaza, we’re ignoring all that other history to focus on some humans who thought that literally owning other human beings was such a good idea/practice that they would fight and die for that idea/practice.

That’s just not right. Those cannons have got to go.