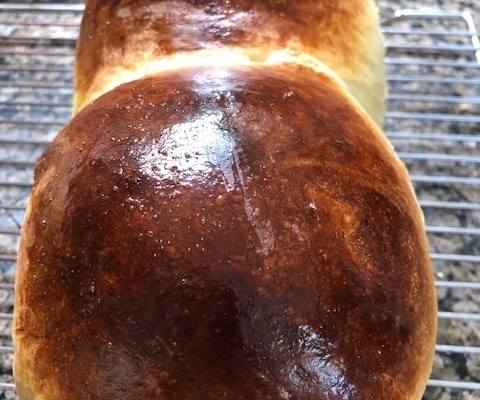 Yesterday, my pumpernickel loaf looked brown and rich and shaped in a nice tight log. A new recipe is always a crap shoot, especially one printed off some random website, but I felt confident during the process that things were moving apace.

The dough did what it was supposed to do—firm up, then get fluffy and light after the stretch-and-fold process. I imagined it finished as chocolatey dark and glossy and slightly bitter. This was my first sourdough pumpernickel, and possibly only my second or third one ever.

When I came back to check on it, a mere hour later (my doughs tend to proof for three, sometimes four hours), it had done something weird. It had lost its shape and part of it had simply split away from the main loaf.

I have baked almost exclusively in the fall and winter—partially because I used to belong to a riding club; making something to contribute to its Saturday potlucks was part of my weekly ritual.

Those potlucks also came with a certain amount of pressure—would my contribution be good enough to serve? Would it stand out among the plentiful table of contributed items? Would I make a fool of myself serving something tasteless and horrible? Ultimately my own insecurity made the process of baking, and participating, almost painful, and yet I was drawn to do it week after week. It was pressure.

Now I’m baking purely for the fun of it, baking sometimes Tuesday, sometimes Saturday. Whenever the urge strikes.  If the urge strikes on a day when it’s 105 degrees, so be it. Baking has become a year-round enterprise, even if cranking the oven to 425 fahrenheit doesn’t help the air conditioner perform better.

The ubiquitous and aforementioned Stephane, French baking instructor, who appears more than I’d like to admit in my subconscious baking brain, constantly invades my brain to tell me that room temperature (RT) matters in the baking process, yet I rarely pay attention to it—I do periodically check the temperature of my dough (DT), and I do know what 75 degree water (WT) feels like on my skin, but I NEVER check my flour temperature (FT). All those other “Ts” on this chart? I should be paying attention, and yet, as my pumpernickel clearly told me, I’m not.

Clearly there’s a Covid metaphor lurking under the crust of this blog post, because thermometers seem to be everywhere these days My pumpernickel might have been happier if I’d taken its temperature. And although it looks really terrible (the melted dough did not really take to artful scoring technique!), the crumb is the right texture (maybe slightly overproofed) and it is, indeed, rich and slightly bitter.

Later in the baking week, i.e., today, I did take the temperature of my fourth recent attempt at elusive brioche success.

A new formula, everything looked really good. I cut the proof short by an hour (given that it was 95 degrees at 11:30 am) and baked at the prescribed temperature. But when I checked the internal dough temperature, it seemed likely still doughy (90 Fahrenheit). The crust looked sufficiently golden, but something told me (Experience? Really? Could it be?) to lower the oven temperature and give it ten minutes more: Voila!

I haven’t cracked it open yet, but as you can see, it belongs in a bread beauty contest. Temperature matters.