Regarding the Auditing Albuquerque Bike Lane Effort (AABLE), it’s early and BB’s expecting some reinforcements with the bike lane width counting soon <taps fingers upon table in impatient manner>. Still, after a slow personal start (hard to measure bike lanes when you’re backpacking), below is a screenshot of the effort as of July 25:

To repeat earlier instructions, it’s so, so easy (it’s like the Shamwow of bike infrastructure inventory collection!):

Oh, you’re saying you want pictures of what this looks like in practice? Here are a few examples:

Example #1, Photo of Street/Cross-Street: In this case, the newly wondrous intersection of Coal and Washington

Example #2, Bike Lane Measurement: The amazing ten-feet plus of Coal at Washington, we’ll deduct the buffer width from this 122 inch total. 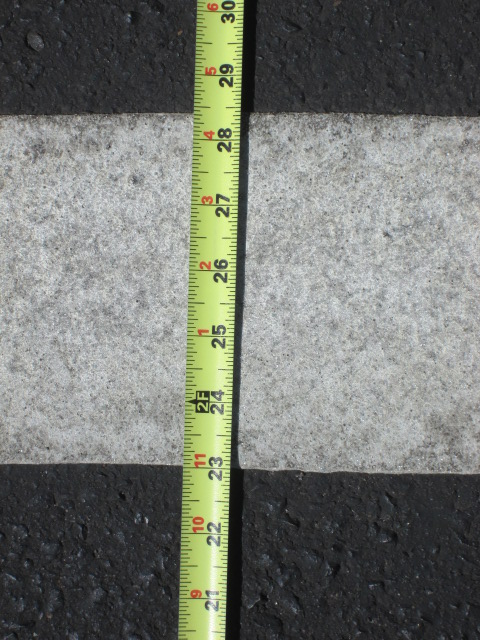 Example #3, Buffer Measurement: We’re calling this 26 inches from mid-point of driving lane stripe to this buffer stripe, again at Coal and Washington.

Example #4: They all aren’t as wondrous and wonderful as Coal and Washington. Here’s Candelaria eastbound just east of I-25. More about this far from adequate bike/ped situation in an upcoming blogpost. Great sidewalk, huh? And did I mention the speed limit is 40 mph here with this skinny-ass “bike lane”? As I said, more to come…

Hope to see figures from you soon. Probably the ideal spot to hit first would be the far North, both East and West, as BB doesn’t make it up there very often. Any and all help, most appreciated!