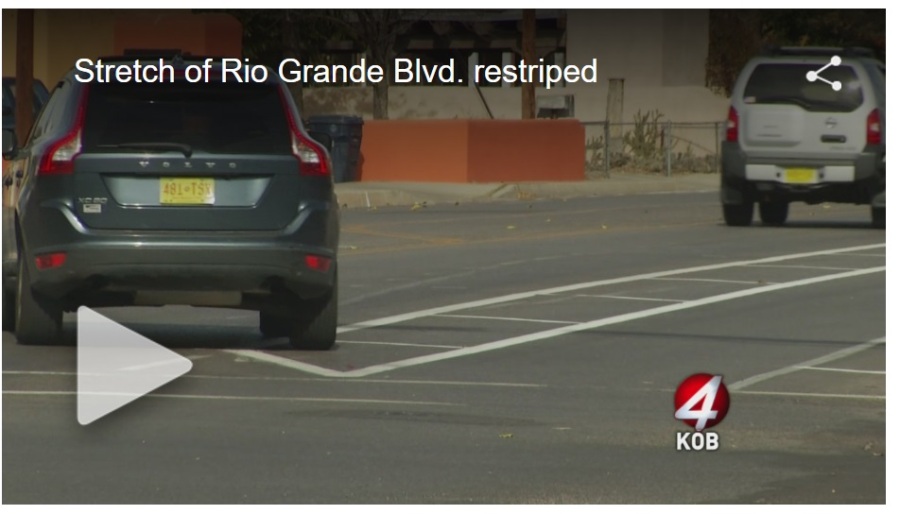 A “test” restriping of Rio Grande Blvd. from Matthew to Griegos is now in place, one designed primarily to see if a “road diet” reducing two driving lanes to one with a sizable bike lane will result in slowing down speeding drivers. And, yeah, there’s a big wide bike lane, too; however, as the KOB story puts it:

The new configuration allows for a wide bike lane in each direction, even though there’s a traffic-free bike lane just a couple of blocks west on the Bosque Trail.

Actually, KOB, that’s a “multi-use path,” not a “bike lane,” but for most that’s probably just semantics. It will be interesting to see how Rio Grande drivers perform on this “test,” as well as how many cheat to use the wide bike lane/buffer.

Still, in lieu of more radical, expensive and controversial measures, expanding bike lanes to effectively replace driving lanes might well result in more cyclists using the wider lane (especially with that juicy buffer). I don’t believe collecting data on bike counts is part of this “test,” unfortunately, something just about never budgeted into these things, at least not yet.

The restriping reminds us that BB researched this “test” while in its design phase, presenting the idea of a “wall of steel” parking lane between driving and bike lanes. Reaction to that piece centered largely on the very low need for on-street parking in this corridor, but it’s a viewpoint (and graphics!) worth another look.