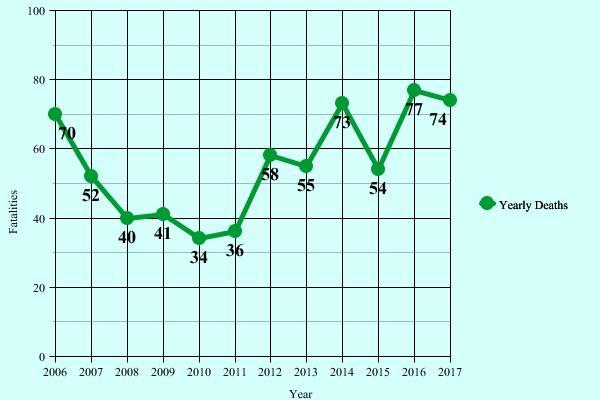 Continuing our periodic look at the pedestrian death crisis in our state and nation, figures for December 2017 have been released by UNM’s Traffic Research Unit. Hence, we now have a complete look at 2017, and that look continues to be gruesome:

TRU having compiled and made available online data since 2006, we are able to make the simple graph above, including the 74 pedestrian fatalities reported in 2017, just below the recent record of 77 in 2016.

Finding simple causation for the nearly unrelenting spike starting in 2012 is, of course, difficult.  Is it tied to:

The rise in pedestrian fatalities nationwide would indicate that NM-centered problems, such as the collapse of the behavioral health system under the Martinez Administration, aren’t the primary factor, although it has certainly been argued that behavioral health services have eroded nationally, as well as in New Mexico.

The bottom line is that we most certainly have a crisis on our hands, one generally involving a socio-politically under-represented and under-served segment of our community/state/nation. As shown below from the December TRU report, fully 20% of New Mexico traffic fatalities in 2017 were pedestrian. It is also worth noting that we have little to no data on pedestrian counts over the 2006-2017 period.

When you have almost zero socio-political power and access, you don’t get counted. Yeah, it’s also very hard to get such counts, but if folks walking our streets had power and political access, we would have found a way to count them long, long ago. 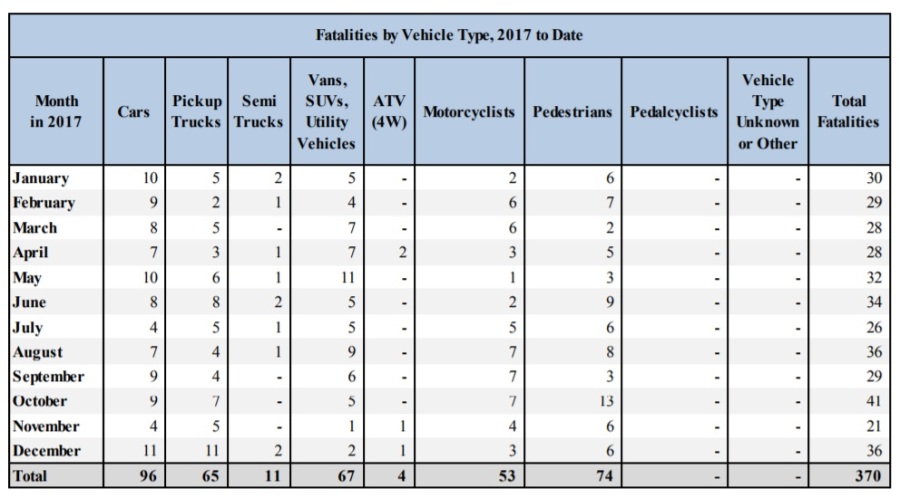 Stay safe out there, everybody. Especially those we don’t count until they’re dead.

*I sought and found quite a bit of VMT data online, but, for a variety of factors, decided not to graph that here. More than anything, changes in how VMT is calculated and differences in estimates between TRU, NMDOT and Federal offices for the years 2006-2017 left me not trusting the numbers enough to post.