The good news in the February Traffic Research Unit (TRU) report on New Mexico traffic fatalities is that 2018 is off to a much better start than either of the past two years:

And the rate of those fatalities related to “alcohol involvement” is looking relatively terrific:

Yet while overall traffic fatalities is trending down so far, the rate of deaths for those walking our state’s roadways remains grimly constant:

Those thirteen pedestrian deaths in the first two months of 2018 maintains a rate right at last year’s record of 78 such fatalities. Combined with the overall reduction, killed pedestrians accounted for 36% of all traffic deaths last month in New Mexico. That’s a rate far higher than any monthly rate in any year this blogger can recall in having spent significant time researching TRU reports.

The 30% figure for 2018 (13 of 43) is itself significantly higher than any recent annual figure, although the New Mexico rate has been creeping into the low 20s in recent years. In point of comparison, here’s a Statistica graph looking nationally at overall/pedestrian deaths from 2001-2015: 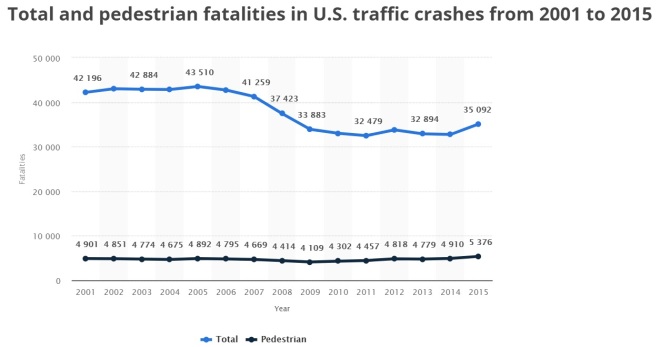 And as I don’t have a Statistica account and can’t find the source for that graph, let’s look at 2003-2012 from the government’s own National Highway Traffic Safety Administration to verify many of the figures: 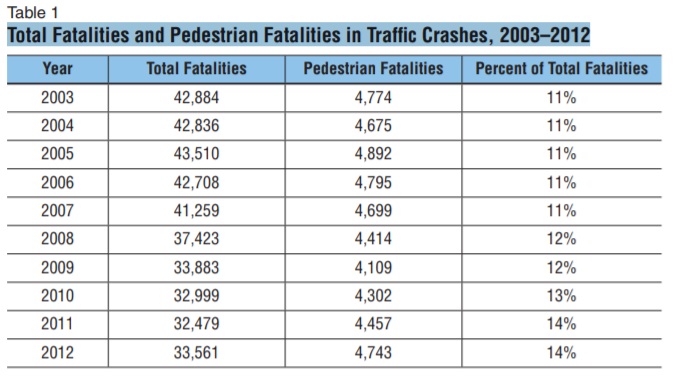 In sum, the New Mexico death rate for those walking our roadways continues to be  scandalous, a condition made only more obvious by the dip in overall traffic deaths. The question of what is to be done about the problem has existed for years; that question only heightens in painful acuity when looking at these latest figures.