With a $5.4 billion transit referendum on its May 1st ballot, Nashville is currently a hotbed of transportation discussion, including signs we in *Albuquerque recall only too well in months past:

In the middle of the referendum heat, Nashville’s new mayor (why a new mayor, long story) David Briley sat down with famed former NYC Department of Transportation Commissioner Janette Sadik-Khan and they together signed a “Declaration of Transportation Independence.”

Copies of the Declaration were then distributed at the conference. Here is my copy, photographed with creases and other imperfections to provide authenticity as a historic Declaration and all: 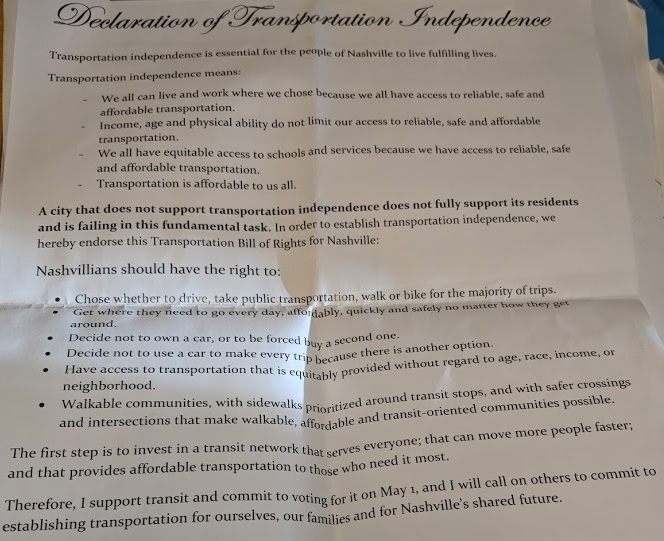 While such non-binding documents, even those signed by mayors, are nothing compared with legislation, traffic code, and improved roadways, Mayor Briley’s signing just before the May 1st vote says a great many things. I guess we’ll find out exactly what those many things are when the referendum votes are cast & counted in 23 days.

*Yes, I know we didn’t vote on A.R.T., but the sign here is uncanny, right down to the font and liberal (get it?) use of the color red.