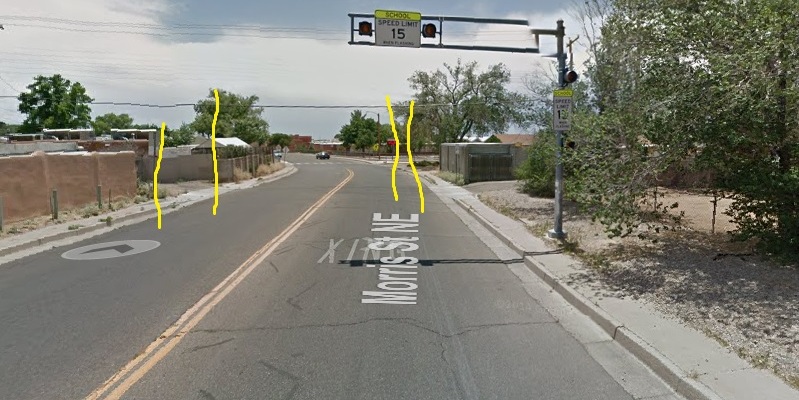 Let’s say you have a residential street over 30 feet wide, and you’re trying to slow traffic down a bit due to its combination of width, cycling friendliness, and a desire on the parts of neighbors to avoid feeling like they are involuntary spectators at a NASCAR event.. Sure, let’s have some abundant on-street parking, but what could we add instead of bike/parking lane striping?

Yeah, let’s arrange some posts like above about every 100 yards or so down the street! Inexpensive, less confusing than parking/bike lane striping, and a gentle reminder that this isn’t NASCAR.

Sure, this is a one-way variation, but couldn’t something like this work on a popular ABQ bike street like Morris south of Constitution?

Wouldn’t it be better to put flexposts like those in Montreal instead of needless parking or bike lane striping, as is often suggested in “traffic calming” discussions?

For about $140 (at $35 per flexpost, which is roughly the going rate) we could have fancier/better posts than either the Montreal or poorly drawn variants above. Sets of four placed at strategic points on wide residential bike routes around town would be far superior to parking/bike lane striping, particularly with the new parking in bike lane ordinance coming into effect.

Something to think about.