We write about roadway signs often here at Better Burque, and, yes, often that writing is of the scathingly critical variety. Not so today!

Above is a sign that Ryan Gosling’s character in “The Big Short” would describe as an ice cream sundae. A wayfinding sign! A great wayfinding sign! There are even “sprinkles” informing users of the Black Arroyo Trail (more about that below) about two, count ’em, two different destinations. We are not being sarcastic. This is a great sign and Burque could use approximately 4,398 such signs along multi-use paths, bike routes, etc.

Better Burque is prepared to make a list of all 4,398 locations for such signs if City/County/MRCOG/NMDOT springs for purchase/installation. Heck, we’ll even throw in the installation for free. We have a screwdriver and socket wrench ready for this purpose.

Regarding Black Arroyo Trail, have you, reader, ever been on this multi-use path? 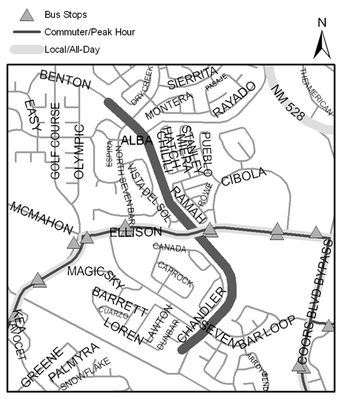 Located near Cibola High School, and, as the City webpage points out, following “the Black Arroyo between two neighborhood parks,” the short paved portion of the Trail is notable for NOT connecting to the following: the adjacent neighborhoods and Cibola HS. Although it runs along the high school for an extended stretch, there’s no bridge to Cibola across the arroyo from the Trail, and the adjacent neighborhood is blocked by a continuous wall upon an arroyo bluff. There’s also no access to neighborhood roads, only access to streets like Ellison, which is no biking/walking picnic. It’s almost like the neighborhood/school doesn’t want anybody who walks/bikes this path anywhere near their school/house.

But we digress into the scathingly critical. The important thing here is the fabulous wayfinding sign atop this post. What a great sign! Yes, it must be pointed out that the two destinations noted in the wayfinding sign aren’t the most hospitable places to bike or walk (Coors Bypass in particular), but that’s not the point.

The point is simply: It’s a great sign. BB asks readers to chime in with your ideas on other locations where such signs might be placed. These will be checked and/or added to the list of ~4,398 locations. We have a screwdriver and socket wrench ready.