Have you ever stood with/without your bike, very straight, trying to be as thin as possible on this tiny strip of red brick while drivers zoomed by in all directions, including those using the turn lane scooped into the little strip of red brick?

Do you know where this photo was taken? (Remember: No scrolling further down; this is a QUIZ!)

Think hard and Rolodex through your most vulnerable cycling/walking experiences, and, if you’ve ever been atop the tiny strip of red brick above, it is sure to come back to you.

Ah yes, it’s the intersection of Mirandela/Winter Haven and Montaño between the River and Coors Boulevard! You’ve very possibly encountered this little death trap if you’ve ever tried to go north/south east of Coors on the Westside (because who in their right mind would cycle or walk on Coors, bike lane or no?). In particular, if you’re a regular BB reader, you’ll recall that both Mirandela going north from Bosque School and Winter Haven north of Montaño are important segments of ABQ’s fabled “Northwest Passage.”

And like any other Northwest Passage, the sailing is good until it’s not. In this case, say going south to north, the riding/walking is idyllic along residential streets north from I-40, the Bosque, and Bosque School. Then you get to the zooming ice floe that is Montaño.

Let’s look at that photo again and bring back all the bad memories:

Funny thing is (and by “funny thing,” I mean something that is not funny at all unless you think getting killed merely trying to ride a bike or walk is funny) that all three streets here are not only on the ABQ Bike Map, they all three have bike lanes.

In other words, you’re supposed to bike through this intersection. It’s an important connector in the bike network. Who says government doesn’t have a sense of humor?

Funny things that aren’t funny aside, what could we do to fix this horrible confluence? Perhaps the best solution would be to build a time machine, go back to the battle over Montaño Bridge, not build the bridge and, instead, tell people who want to live on the Westside that it’s stupid to live on the Westside when your job isn’t on the Westside, so suck it up and either move east of the River or telecommute through this newfangled thing called the Internet.

While this solution appeals on pretty much every level possible (I find myself falling into pleasant reverie just by typing the word above), time machines aren’t yet on the market and research/development for their manufacture is currently, unfortunately, taken up with making little electronic towers you can talk to because you’re too fucking lazy to get up and operate an electronic device yourself.

So, we need a solution in 2019 instead of going back to 1995. Here’s an idea: HAWK signal. You know, like the ones put up a few years back at Lomas and Alvarado and now plentifully planted all along Central Avenue as part of A.R.T. Plop a HAWK signal at this intersection, cut a crosswalk through the tiny strip of red brick “refuge,” and we’re far safer than proverbial death trap!

But some of you smarter folks out there are saying/thinking, “but BB isn’t this intersection pretty close to Coors,” and you would be right, depending on one’s viewpoint on what constitutes “pretty close.” 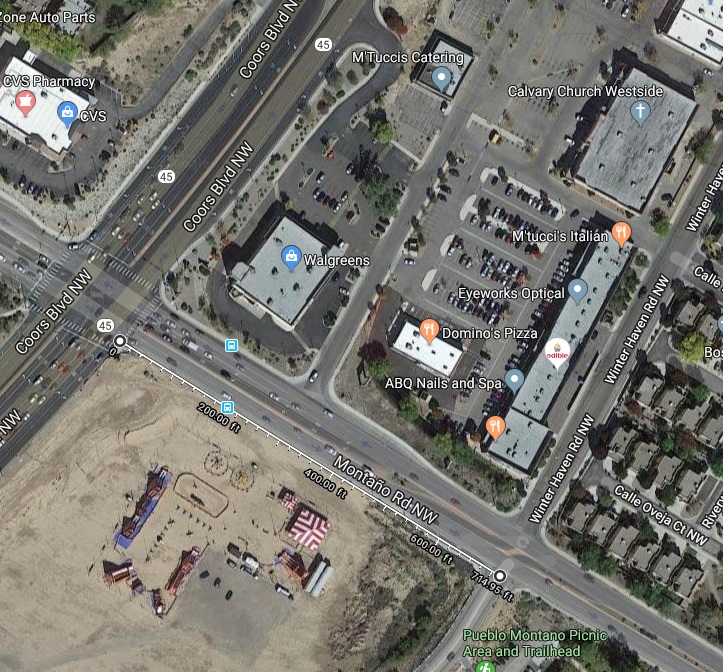 That’s a Babe Ruthian 714 feet, roughly, between this intersection and Coors, a distance historically considered too scant for consideration of a new signal, HAWK or otherwise. But that’s historically and:

If you squint hard, you can see the distance between the signalized intersection of Central and Richmond is a gloriously short 373.20 feet from the HAWK at Central/Bryn Mawr, and that measurement is being generous. Ding-dong, the “that’s too close to the nearest signal” witch is suing the City.

By the way, have I mentioned that the intersection in question is very near a school and a hugely popular picnic area and trailhead? I should probably mention that.

So let’s put a HAWK at the intersection of Miradela/Winter Haven and Montaño. I know HAWKs cost ~$100,000 all told, so I’m pitching in a $1. If you haven’t ridden/walk through the current death trap, do so. I might put up a bucket for fund raising purposes on that tiny strip of red brick; that should bring in tons of cash from scared crossing attemptees.

Until the bucket got hit by a driver, that is. It is a tiny red strip, ain’t it?

2 thoughts on “Another Proposed Solution to Yet Another Scary Problem”