A BB reader recently asked a question about the Lomas/Alvarado HAWK signal I couldn’t answer, not being a daily rider in that area. This made for an excellent excuse for a bike ride, and I went out yesterday to the point where I got a bit of a sunburn.

It was a great day of riding. The visit to the HAWK wasn’t quite as great.

As outlined last week, there are some installation/logistical problems with this very first HAWK signal in the city limits of Albuquerque. Yesterday’s visit revealed some more, while also answering the aforementioned reader question. That inquiry pertained to how long the bike/ped user has to wait after hitting the “beg button.” The answer to that, I found, is 15 seconds. At the end of that 15 seconds, and the signal is red and crossing is permitted, the user has 45 seconds to cross. So from first flash of yellow alerting motorists that the HAWK will eventually go red, to end of red, is 60 seconds. Keep in mind there’s also a median beg button for those needing more time to cross (buttons crudely circled in red due to poor photography):

While understood that it’s meant to be used by users capable of widely divergent speed in crossing this street, the design of the Lomas/Alvarado HAWK is, well I would say “overkill,” but that is just not the right term to use when on a subject concerning cyclists/pedestrians just trying to stay alive. Let’s just say that 45 seconds (or up to 90 seconds, if one also employs the median beg button as well) to cross Lomas is simply not designed with bicycles in mind. At all.

Okay, fine. What about pedestrians and the Lomas/Alvarado HAWK? The 45-second crossing time, a typical setting these days, conforms nicely to accepted crossing speed calculations that take into account slower pedestrians. San Francisco, for example, uses 2.8 feet per second in its timing calculations, a slower/lower figure that many municipalities. Lomas is 80 feet wide at Alvarado, and at 2.8 FPS we get a crossing time of 28.57 seconds. Tack on some buffer on both sides of that 28 seconds and 45 seconds total would seem plenty.

So why is the median beg button there? It’s certainly not there for the cyclists, and it doesn’t seem needed for pedestrians either.

But that’s not all from a pedestrian perspective. While conducting “scientific research” in hitting the beg button and crossing a few times, seeing driver behavior that included honking of horns, widespread uncertainty and a few arguable cases of “cheating” (e.g., motorists starting back up through the intersection with HAWK flashing red and crossing signal still showing time left for bikes/peds to cross), I also saw the following: 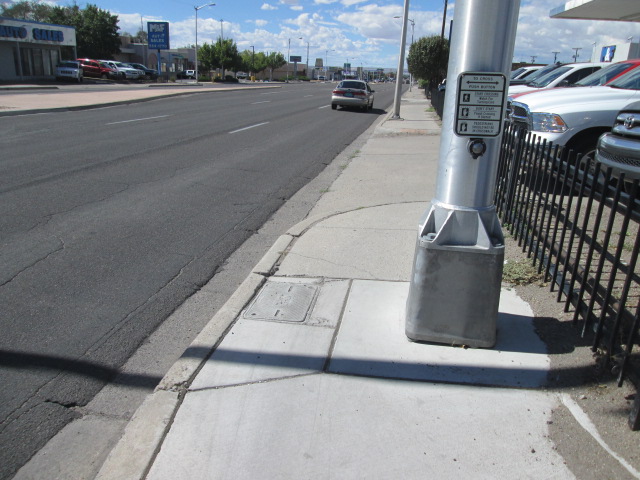 That’s the sidewalk on Lomas immediately west of the Alvarado intersection. The fixture taking up much of the space is, of course, the HAWK signal light pole itself. Um…that’s not ADA 60-inch required width, is it? Apologies for not measuring here, but on-site it seemed pretty obvious to be out of ADA compliance. Which it is.

Oh well, you’ve probably already noticed there’s another light pole up the road a few feet in the photo above, one that also makes getting a wheelchair, for example, down Lomas difficult-to-impossible. Lomas has never been designed for pedestrians, and the HAWK signal just serves to provide another obstacle to walking down this unfriendly road.

To make a long rant as only slightly longer as possible, the HAWK signal at Lomas & Alvarado seems designed to be used only by pedestrians who want to cross Lomas, very, very slowly, to keep walking down Alvarado. And there are certainly a few of these people. For all other users, cyclists included, the HAWK seems a very good idea designed/installed quite poorly.  After “researching” two instances of crossing using the beg button, I ended up just crossing sans button/HAWK, using the very pretty green painted median refuge to wait out a car or two on the far-side lanes.

Enough ranting. How about some solutions? As a newish technology, HAWK is just one of a family of bird-named innovations (e.g., TOUCAN, PELICAN) aimed at making mid-block bike/ped crossings safer. My favorite of these is the PUFFIN, which combines HAWK signalization with sensors to detect how fast pedestrians are crossing. Tucson, king of HAWK, et. al., has a PUFFIN as part of its over 150 HAWKs around town. It’s designed to give extra time to pedestrians who need it, and is showing to be a safety-raising success.

Naturally, cost is the PUFFIN advocates enemy. The cost, Tucson notes, “ranged from $80,000 to $150,000 depending on location.” Still, in an age of increasingly “self-driving” cars with sensors popping up everywhere, one would hope costs would decrease and public support for saving lives increase via use of such sensor technology at intersections. Having sensors that detect crossing speed of both cyclists and pedestrians, along with shorter than a 15-second delay before red, would make the Lomas/Alvarado HAWK signal much more relevant. Barring expenditure of PUFFIN scale, having two beg buttons, one for cyclists and another for pedestrians, would also address the delay/length dilemma.

Online research doesn’t indicate much use of split beg buttons and/or crossing times, nor, for that matter, is PUFFIN usage widespread. Meanwhile, we continue to mash these innovations into the transportation grid as cheaply as possible, almost always in avoidance of the dreaded purchase/fight over expanded right-of-way. Lomas & Alvarado currently reflect all of the obstacles above, and this “showcase” project for HAWKs in Burque needs some tinkering and improvement before we can successfully use it to argue for more HAWKs around town.

10 thoughts on “Another Look at Lomas/Alvarado HAWK: Time for a Version 2.0”