What legal penalty should be paid by drivers who “gun” their vehicle speeding to beat a red light and end up killing somebody? As explained below, in New Mexico you might be charged/convicted of “Careless Driving,” a misdemeanor including up to a possible 90 days in jail.

And that 90 days may end up being “unsupervised probation.” Even if you’re already up for charges of selling marijuana and guns out of your smoke shop. Actually, that’s precisely what has happened in the aftermath of the killing of Chris Gallegos.

Having looked through every 2019 pedestrian fatality police crash report in Albuquerque via public records request, all forty or so of them, every case is poignantly memorable, but some stick with me more than others.

The case of Chris Gallegos is one I still think about every day.

Around Noon on June 14th of last year, Mr. Gallegos was crushed to death between a huge GMC truck driven by 17-year-old David Caldera and the red light signal mast on the southeast corner of the intersection at Mountain and 3rd Downtown.

Extremely well-respected by those also experiencing homelessness and service providers working with the unhoused, Mr. Gallegos was described by Noonday center for the homeless Executive Director Danny Whatley thus:

“He was exceptional, he really was,” Whatley said. “I’ve been doing this for 11 years and he was one of those guys that will always be there for me as far as memories. He was an exceptional young man.”

At the time of the incident, focus was placed on the sadness within the community and the bizarre nature of the crash. Young Mr. Caldera’s truck was struck by a driver in a SUV legally crossing the intersection at a green light. The force of that collision spun Caldera’s truck into Gallegos and the signal mast:

Readers will note the statement above that Caldera, actually stated as “The GMC Sierra pickup,” “disregarded the eastbound red traffic signal on Mountain Rd. NW and entered the intersection at 3rd St. N.W.” For this reason, and only this reason, the police investigator recommended the following:

What was left out of the supplemental crash report leading to the Careless Driving recommendation outlined above was what has always seemed to me a very important fact. Young Mr. Caldera didn’t just “run” the red light, he gunned the truck to max RPM to try “beating” it.

We know this because it’s right there elsewhere in the crash report.

As happens in some, but not nearly all, crash investigations, APD got a search warrant and researched the “black box” of Caldera’s truck. The “Event Data Recorder” in newer vehicles reveals extremely valuable information including driving speed and acceleration at the time of a crash. The following information was revealed by this process:

Obviously, going full throttle to 43 mph resulted in a more violent initial impact, spin, and contact with Chris Gallegos and the signal mast. Obviously, young Mr. Caldera did not just “disregard” the red light, he consciously increased the possible danger by flooring it.

Is such an action “Careless Driving?” Isn’t it not only more than “careless” but also beyond the scope of the fractionally more serious charge of “Reckless Driving,” similarly punishable by up to 90 days in jail, including 5 days of mandatory jail time?

Not in New Mexico. Not really.

That’s because while the State does have a “Homicide by Vehicle” statute, the standard of what constitutes Vehicular Homicide is so strict that, in practice, it is only enforced in cases of impairment, and only rarely even in those cases. For example, there are other 2019 pedestrian fatality cases in which drivers were found to be impaired. As of today, no charges, neither Homicide by Vehicle or even Careless/Reckless Driving have been brought in those cases.

The primary reason for this is that the victims were not crossing at a signalized crosswalk. Thus, “pedestrian error” trumps driver impairment. Really.

And speaking of today, let’s fast forward to what is evidently a conclusion in the case of David Caldera’s killing of Chris Gallegos. Last Friday, May 15th, the following was filed in Metro Court: 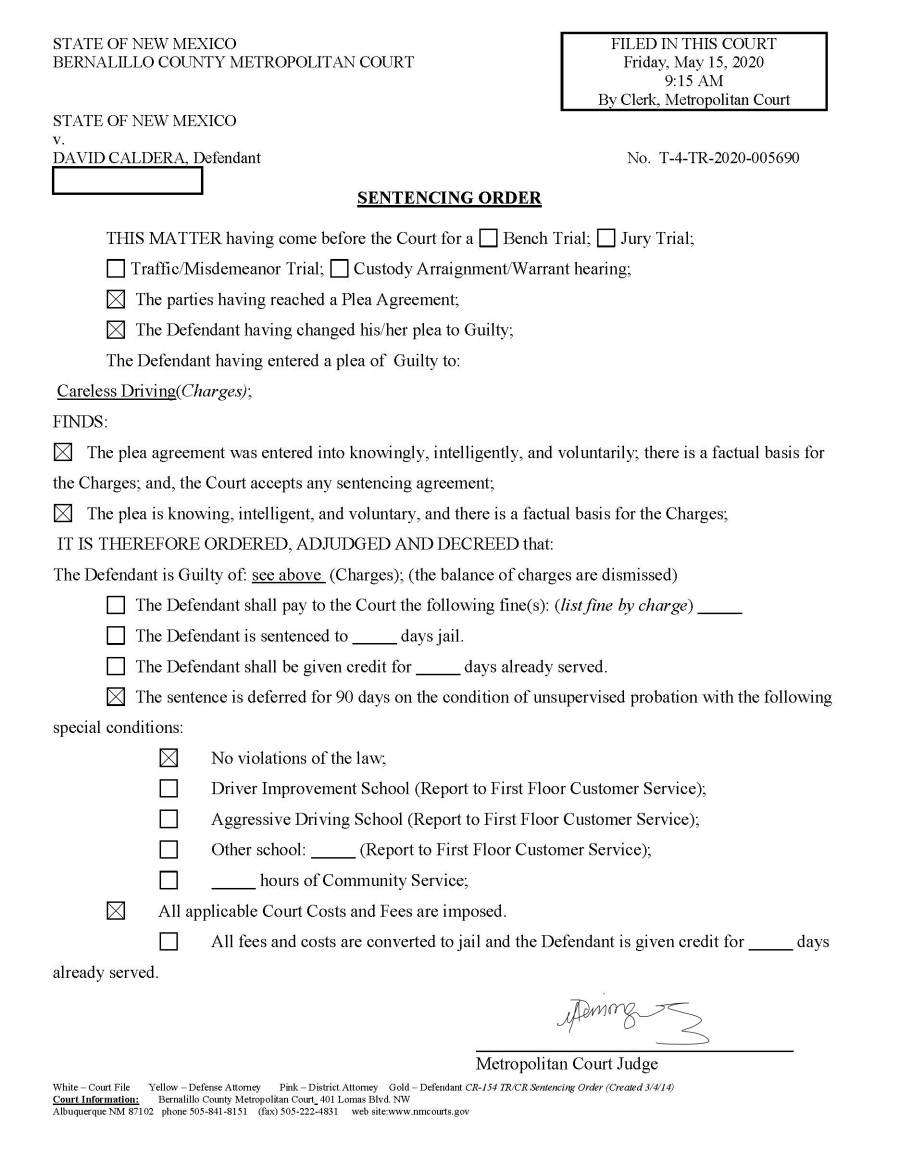 Yup. 90 days “of unsupervised probation” and the “special condition” of “no violations of the law.” Well that will stop people from gunning through red lights…

To close, young Mr. Caldera has other legal entanglements that might end up costing him actual jail time. You might remember news stories about two gentlemen busted back in March for selling marijuana and guns out of the “Happy’s One-Way Smoke Shop.” Young Mr. Caldera is one of those two gentlemen and currently scheduled for trial in December. Charged with Possession, Intent to Distribute, and Conspiracy to Commit Distribution of Marijuana/Synthetic Cannabinoids. While there’s no gun trafficking charge included at this time, David Caldera is finally up for felony charges.

Unlike killing somebody by gunning his truck through a red light. That’s just “careless.” That’s just a misdemeanor.

One thought on ““Careless Driving” and the Killing of Chris Gallegos”