We wrote last week about the closure of Albuquerque Lincoln Junior High back in the 1970s. It’s so very tempting to post about 73 follow-ups to that closure, and I’m serious when I say it would make for a smashing book/film. Instead of a book here via 73 blogposts, I’ll try to stick to just this one…for now.

Back on April 16, 1970, when Lincoln was first proposed to be closed by the APS School Board, there was a raucous Board meeting reported in the Albuquerque Tribune. It takes up everything but the many, super-duper interesting ads on this page of the next day’s paper: 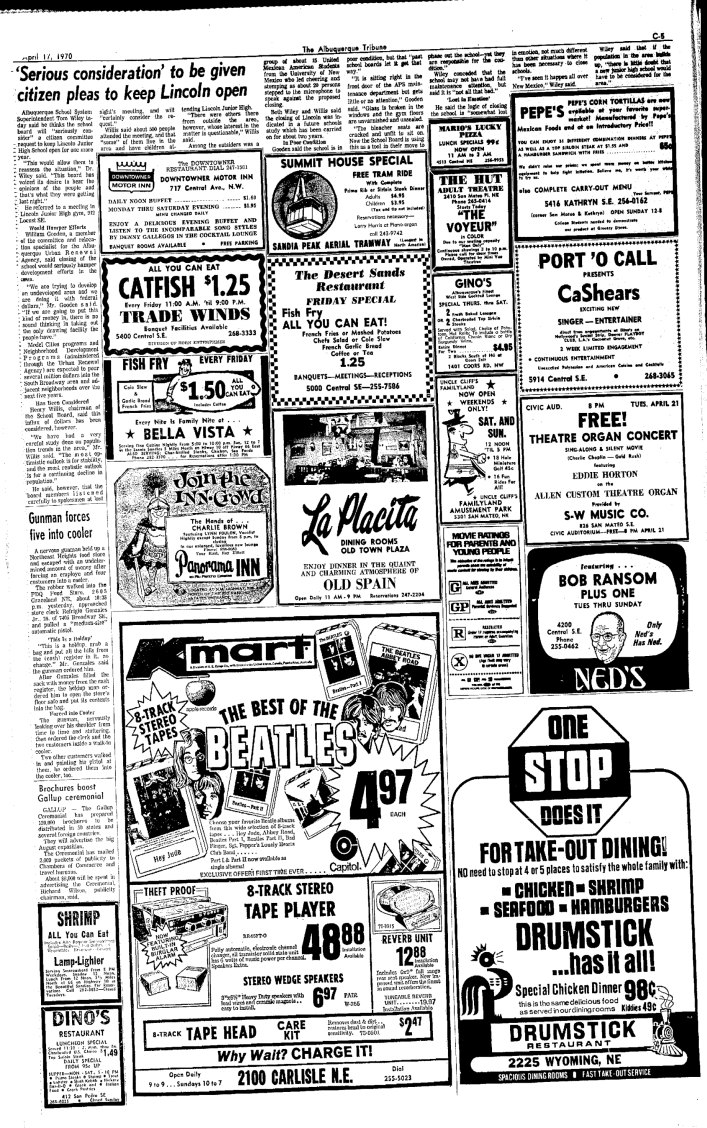 One can easily spend three hours viewing and contemplating all the cultural and socio-political aspects of the many ads on this page, and, trust me, I have. Researching old newspapers is hard and you really have to stay focused on the originally intended topic. “The Hut” adult theater on San Mateo? Has an ad in the newspaper?

Note: Adult theater ads were prominent in every edition of local papers in that era, but I already digress.

Sticking to the story of closing Lincoln High School, let’s refresh readers a tiny, tiny bit on details of that closure: 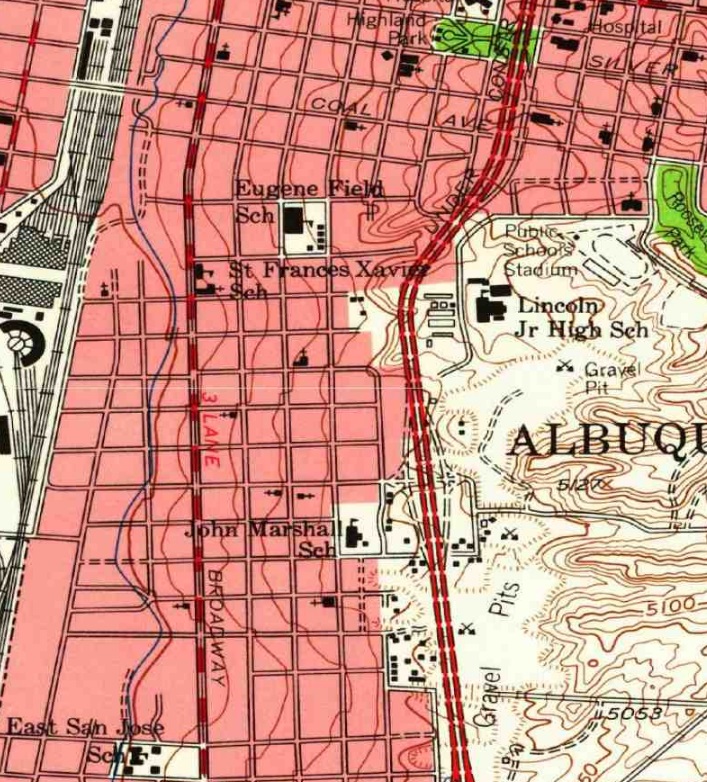 This 1960 USGS map excerpt shows Lincoln just east of the neighborhoods we’ll collectively call “East Barelas,” with newfangled I-25 under construction (dashed red lines) and ultimately effectively separating Lincoln from many of the neighborhood kids attending the school, especially those who walked/biked there.

By 1970, APS had decided to close Lincoln, in part due to declining enrollment, but also for a number of racial/ethnic, socio-economic, and more racial/ethnic reasons that would make for a smashing book/film. Getting back to that full page of the April 17 Tribune, let’s examine an excerpt in more detail:

Henry Willis was then the APS School Board chairman. His report that “some” (quote/unquote) of those attending the raucous meeting live in the area, but…well, just read the rest.

Contemplate, if you will, that “group of about 15 United Mexico American Students from the University of New Mexico…” who had the unmitigated audacity to lead “cheering and stomping” during the public comment period. School Board chairman Willis obviously considered these young people ruffians, ragamuffins, and scalawags, if not ne’er-do-wells. They are “outsiders.” And yes, they are “United Mexican American Students from the University of New Mexico.” The writing makes this a tad unclear, but capitalization of the “U” in “United” probably indicates these students were members of “UMAS,” about which you can find more here.

Parsing the fact that no newspaper reporter would use such language today, the overall tone and chairman Willis’ allusion via “from outside the area” brings up a few questions/thoughts: 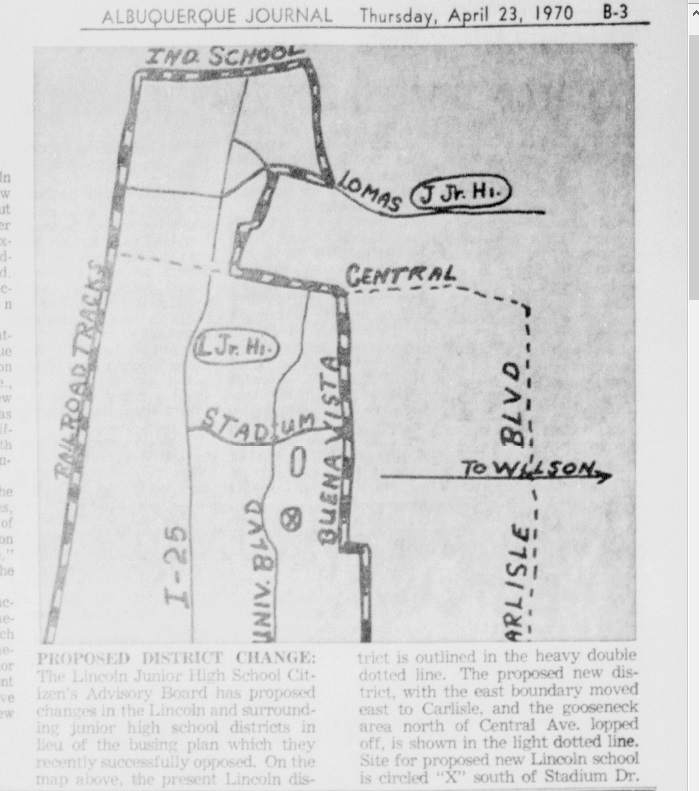 Of course, use of terms like “outside the area” as argument for denial of many things, including civil rights, goes way back. Just this morning, historian Michael Beschloss noted similar use by Alabama Governor George Wallace in 1964:

George Wallace writes a letter about segregation, 1964: “We have never had a problem here in the South except in a few isolated instances and these have been the result of outside agitators….I personally have done more for the Negroes of…Alabama than any other individual”: pic.twitter.com/wP7ltlYdy9

As case of systemic racism, the events around the closure of Lincoln Junior High, including determination of the layout of I-25, is one of the unfortunate seemingly limitless number of cases. That’s why the term “systemic” is used.

Nevertheless, it is helpful to recall historical cases such as this to raise understanding now, particularly in Albuquerque, a town heretofore provincially stuck in a pathologically mistaken “we’re multicultural, so we don’t have the problems they have elsewhere” mindset.